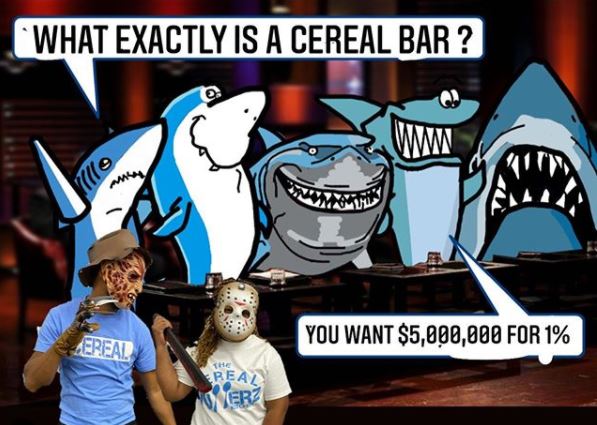 There is a very good reason as to why the astute business moguls that make up the panel of ABC’s ‘Shark Tank‘ are called “Sharks.” With their killer instincts and a keen eye for opportunities, they always know when something good comes their way, and each time, they make sure to cut the best possible deals for their benefit. The show allows budding entrepreneurs to pitch their company models and expansion plans to these specialists for funding.

The business owners are then left to negotiate with them, which, sometimes, results in some very lucrative bargains. But not everyone is lucky enough to land a deal, especially with the stakes being so high and the Sharks being so hard to impress. Hoping to be a success story here, though, is Cereal Killerz. So, let’s find out more about them!

Cereal Killerz: Who Are They and What Do They Do?

Let’s be honest, the very first thing that we do when we wake up is think about food, especially breakfast cereal. We mean, it is not only tasty and somewhat nutritious, but some of our best childhood memories are attached to it. We never got the opportunity to take our cereal obsession to the next level, getting to mix it with other things, or try it with different kinds of milk. That’s exactly where Cereal Killerz comes into play.

Owners Christopher and Jessica Burns of Las Vegas, Nevada, wanted to raise the bar for how breakfast cereal is consumed, especially when they realized that they weren’t alone in their love for it. So, in mid-2019, they opened the very first Cereal Killerz Kitchen in Henderson, Nevada. The establishment is basically a “cereal bar,” where customers can indulge in their favorite breakfast meal and add many toppings to it.

The Cereal Killerz Kitchen offers over 100 different cereals, along with both dairy and non-dairy milk options and, of course, a wide array of add-ons, including candy, chocolates, and ice cream. The ice cream can also be consumed separately if desired, and the customers are given free rein in what they want to have. In fact, the Cereal Killerz Kitchen actually encourages you to mix up flavors and try new things, with your imagination acting as your only limit. You can even whip up your own waffle and milkshake flavors as well.

Cereal Killerz: Where Are They Now?

It seems as if Cereal Killerz’ success has been going through the roof. Since its inception, they have added snacks like cinnamon toast, bagels, and cream cheese, known as “Killer Snacks,” on their menu. And in November 2019, they even debuted a special item, “The LeBron James,” which is described to be a kind of waffle taco that is filled with ice cream and the basketball players’ favorite cereal, Fruity Pebbles.

Furthermore, in December, an article on the Vegas.eater.com website placed the Cereal Killerz Kitchen on the 23rd spot in their list of 200 new restaurants that had opened up in Vegas in 2019. Cereal Killerz opened up another store in downtown Las Vegas in July of 2020, and as per reports, the Burns’ are planning to open up another one sometime soon, but its exact location is yet to be disclosed.

The owners have also decided to close the original establishment in Henderson, to build a new one that would be bigger and more accessible to the community. The aim is to finish this facility by Spring 2021 for it to be in full bloom by summer. An online store for The Cereal Killerz Kitchen is also in the cards, and its anticipated launch date is in just a few weeks, so make sure to be on the lookout for it. (Featured Image Credit: Cereal Killerz Kitchen / Instagram)