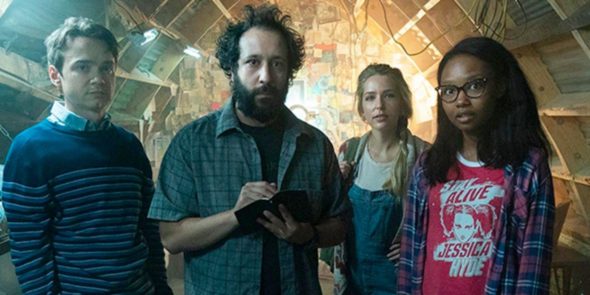 Amazon Prime’s ‘Utopia’ has multiple elements that we have long come associate with the works of its creator, bestselling novelist Gillian Flynn (‘Sharp Objects’, ‘Gone Girl’). Based on the cult UK series of the same name, the show is an exhilarating ride brimming with morally ambiguous characters, gripping suspense, and plenty of blood and violence. It follows a group of comic book fans/conspiracy theorists whose lives get entangled in a global conspiracy after they learn of the existence of a highly sought-after sequel to a graphic novel that eerily and correctly has predicted a number of epidemics before their respective outbreaks. SPOILERS AHEAD.

The show opens with five online friends planning to meet for the first time in Chicago and try to purchase the manuscript of the graphic novel ‘Utopia’, the existence of which has always been speculated but never confirmed. Wilson Wilson (Desmin Borges), is a doomsday prepper hailing from a family of conspiracy theorists. Becky (Ashleigh LaThrop) is a bright and mild-mannered girl with a mysterious illness. Ian (Dan Byrd) is a regular guy with a job in the insurance sector. Samantha (Jessica Rothe) is the most brilliant member of the group and its apparent leader. Grant (Javon Walton) is a young boy from an impoverished family who pretends to be rich and adult to the other members. They hope that the recently-found manuscript, being the sequel to ‘Dystopia’, can provide them with hints about the next outbreak and even offer solutions to some existing diseases.

After the sale of the manuscript is concluded, two mysterious men, Arby (Christopher Denham) and Rod, appear and kill everyone who has seen the pages of Utopia, except for the five main characters. Grant escapes with the manuscript. Jessica Hyde (Sasha Lane), the heroine of the two graphic novels, shows up, kills Rod, and rescues the group. She later kills Samantha as well, feeling her inherent leadership qualities were a threat to her own authorities over the group. As she tries to keep the rest of them alive, they are hunted by Arby on behalf of Dr. Kevin Christie (John Cusack), an influential pharmaceuticals entrepreneur. A devastating pandemic soon breaks out, killing hundreds of children across several states in the US. Virologist Michael Stearns (Rainn Wilson) discovers that it’s the same virus that he had previously found in bats in Peru.

As ‘Utopia’ rushes toward its inaugural season finale, the main characters realize that a shadowy deep-state organization named the Harvest is after them. They have wiped out Wilson’s family and placed Ian’s loved ones in a hospital, hoping to catch him when he visits them. Stearns has teamed up with the conspiracy theorists after learning that his wife has been a sleeper agent for The Harvest, sent to keep him in check.

Arby undergoes drastic changes in the course of the series. He begins as the most efficient killer affiliated with the Harvest and seems to view Christie, the apparent leader of the organization, as a father figure. But he starts to lose that sense of awe as he becomes more and more aware of what has been done to him since he was a child. Both he and Jessica has grown up at a place simply called “Home” along with several other children. As Christie later explains, these children are brought in from various countries across the world and raised at “Home” for different purposes. “What have you done to earn your place in this crowded world?” Christie says multiple times in the series. Some of these children are meant to be lab rats, used during the experiments, while others will train to be assassins, like Arby. Some even are destined to become martyrs for what the Harvest considers the greater good, like Charlotte, who dies after willingly contracting the deadly virus.

During his raid on Alice’s (Farrah Mackenzie) home, Arby sees in one of the pages of the ‘Utopia’ manuscript that he and Jessica are supposedly siblings. This is the reason why he delivers Christie to the conspiracy theorists and protects them throughout the night from attacks from men and women like him.

During their interrogation, Jessica, Stearns, and others come to realize the level of Christie’s megalomania. What is supposed to be a vaccine for the deadly virus, in fact, is a concoction that will turn the entire humanity infertile for the next three generations. Christie has deduced that all modern problems, from deforestation to global warming, have a singular source, overpopulation. He believes that by significantly bringing down the global population he can initiate Earth’s healing process. He considers that this is his purpose in the world.

Even though he is tied up and being interrogated, Christie still has absolute control over the situation. He seems to have information on each of the main characters and uses it masterfully to manipulate them. Wilson has always been the most susceptible, due to his own pessimistic views on humanity. Christie finds an eager listener in him, although he is the one who ordered the deaths of Wilson’s family.

After Ian, Stearns, Becky, Alice, and Grant leave to destroy the vaccine and Jessica departs with Arby, Wilson stays back and seems to have freed Christie who calls his son, Thomas (Cory Michael Smith). Ian and others’ mission is successful and the entire cache of Christie’s vaccine is destroyed. Ian and Becky get engaged. Stearns leaves the Christie Bio headquarters separately from the others and is shown to drive away with the mother egg from the vaccine incubator, indicating that he hasn’t destroyed it. Grant is arrested by the police as he is still suspected of killing Christie’s protégé Cara and her family. Becky manages to escape the police and is picked up by Wilson. Seeing both Thomas and Christie in the car, Becky realizes that Wilson has betrayed them. As for Ian and Alice, they remain free and are currently on the run.

Arby drives Jessica to the Home. She sees the yellow house from her childhood again, where she endured all the horror and trauma. As she lies down on her old bed, the virus that she earlier contracted from the rabbit bite is coursing through her body. Agent Katherine Milner (Sonja Sohn) shows up and reveals to Jessica that she is not part of the Homeland Security, but she is the “Home”. She also tells her that she and Christie were working towards similar goals but not any longer, although he doesn’t know it yet.

Jessica earlier thought Christie to be the mysterious Mr. Rabbit, the supposed big bad of the show, seeing a tattoo on his back. But now, Home shows her own tattoo, indicating that she is the real Mr. Rabbit. She explains that the graphic novel doesn’t have much worth to her as it was just a bait to lure Jessica there. She easily subdues Jessica and rips the clothes on her back apart. She seems to have multiple markings on her back like the one on her arm.

The way Milner speaks about her and Jessica’s father’s vision of the future, these marks on Jessica’s body carry some forms of biological weapons that are designed to change human behavior. In the closing scenes, we are shown that Jessica’s father is alive. This implies that he is still working with Mr. Rabbit.