Vanderpump Rules S08 E07: When and Where to Watch? 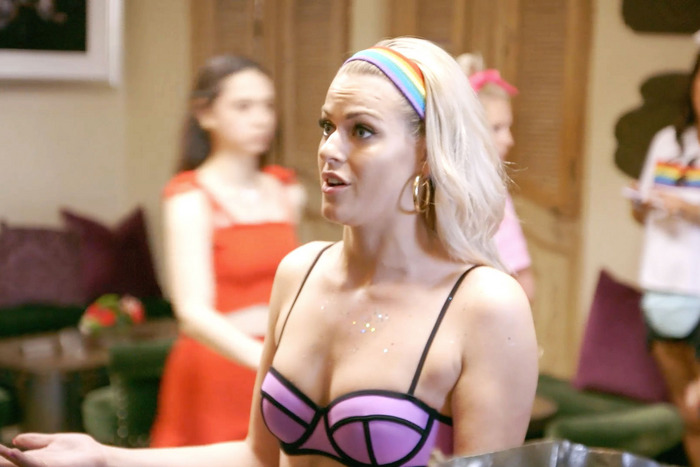 ‘Vanderpump Rules’ returned this week with its sixth episode, which is centered around one element of human emotions – pride. Hence the name, ‘Your Pride’s Showing’. Very well. But when there’s a bunch of reality stars gracing your television screens, you can rest assured that there’s no lack of drama in this episode as well.

Now, if you are already done watching whatever ensued in the last episode, you must be wondering what lies in store in the next week. Read on to know everything about the upcoming episode — i.e ‘Vanderpump Rules’ Season 8 Episode 7 release date, streaming details, time, and what has happened so far.

Vanderpump Rules Season 8 Episode 7 Release Date: When Will It Premiere?

The official synopsis for the seventh episode goes like this: “Stassi, Katie, and Lala throw Brittany a princess-themed bridal shower, while James gets disinvited from Peter’s birthday party. Lisa Vanderpump takes Raquel to task for walking out on her shift during Pride, and Dayna and Max decide to take the next step in their relationship. Finally, when a scandal erupts concerning Jax and Brittany’s pastor, Sandoval and Ariana take a moral stance that threatens to tear the bridal parties apart and ruin their friendships forever.”

You can also catch a sneak peek of the episode here.

Lisa Vanderpump invites some of her employees from SUR to her home and asks Scheana why she is giving such a hard time to Dayna. It seems Scheana is jealous of Dayna’s relationship with Max. Ariana converses with Lisa about her depression, with the latter offering her support and advice.

James reveals that he and Lala are again on bad terms. Ariana is excited about opening up as a bisexual during the Pride event whereas Jax bonds with Dayna while discussing Scheana. James apologizes to Lala for his offensive Instagram post. Raquel misses James’s set while he plays at TomTom, causing the latter to become insanely furious. But later, he apologizes for his behavior.

Scheana and Dayna have a one-to-one conversation. The former says she is not happy that Dayna is going around telling people she is mean to her. Dayna then blasts Scheana for having sabotaged her hair appointment. Eventually, Scheana starts crying and assures Dayna that she is not a bully. She also says: “I haven’t been fair to you, and I’m really sorry.” The two decide to leave the past behind and look forward to working together at SUR.