When Will ‘Vikings’ Come Back on History? 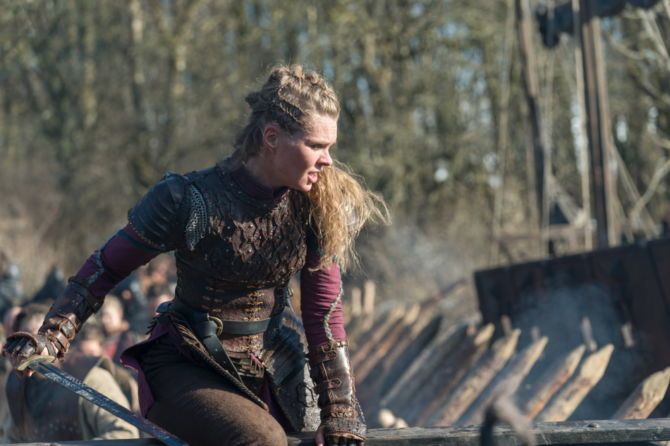 ‘Vikings‘ has given us a season full of excitement, action, betrayals, and emotions, as we trace Ragnar Lothbrok’s sons, trying to find their place in the world. Season 6 has seen conflicts and losses, while hope has been around the corner. The current episode of ‘Vikings’ is the midseason finale and brings the first part of this season to an end.

Naturally, you might be wondering about what happens in this episode. We have got you covered. In fact, we will do you one better and run you through what happens in ‘Vikings’ Season 6. However, first, let us tell you when and where to watch the upcoming episodes.

Where to Stream Vikings Online?

‘Vikings’ is a History Channel show, so the easiest way to watch it is with a cable subscription. In case you don’t have one, you can head to the app or website of the History Channel.

You can check out the promo for the upcoming ‘Vikings’ episode below. It seems that a unified force faces the invading army, but Bjorn’s death hangs over the battlefield.

‘Vikings’ Season 6 starts with Lagertha deciding to take a step back from political life, allowing Bjorn to become the kind of king he wants to be. Meanwhile, Ivar journeys along the Silk Road. He shaves his beard, once they reach Kiev. Around the same time, their caravan is attacked, and Ivar is ultimately taken to Prince Oleg. The two men develop a relationship, based on their shared love of ruthlessness.

As Ivar gets to know Oleg better, he sees the latter staging coups against his brothers. Although Ivar is used to finding himself in the middle of these squabbles, he welcomes the opportunity to sit out of the feuds for now. Meanwhile, Bjorn finds ruling rather overwhelming and decides to make good on his word to Harald, who has been captured. Bjorn’s decision to go on an adventure is not alarming, but his choice of putting Hvitserk on the throne, in the meanwhile, shows he is not ready to rule.

He does not seem to notice Hvitserk’s downward spiral until people close to him change his mind. Ubbe and Torvi are left in charge of Kattegat in Bjorn’s absence. This shifts our focus to Ubbe and Torvi, who seem to genuinely love and respect each other, among other couples, who are not beyond lying or cheating.

However, Ubbe suggests that Torvi stay behind with Lagertha and their children. She refuses to do so, and Ubbe receives no support from Lagertha either. Despite this misjudgment, Ubbe proves he is a capable stopgap leader. He seems to be a people’s person, well-liked due to the speeches he delivers. Meanwhile, Bjorn prepares to free Harald, keeping his word. This action makes little sense since Harald had already declared his intention of attacking Kattegat.

Elsewhere, Ivar grows weary of Oleg and is a little averse to the violence. However, he cultivates his friendship with Prince Igor, the heir to the Russian throne. This might be fruitful once the boy comes to power. Towards the middle of the season, the action comes somewhat to a lull. We get a glimpse of the tale of Iceland, as Flatnose tells the story of Floki’s community’s fall to Bjorn. The ruler tells him that Floki should come back and verify the tale, signifying his lack of trust.

As for Lagertha, her retirement does not lessen the action. We see her preparing her community for an attack from bandits. This battle against bandits rages on until Lagertha faces the leader. In a fierce showdown, the bandit is vanquished by Lagertha, who takes a lot of injuries as well. Instead of waiting for the injuries to heal, she immediately heads to Kattegat to tell Ubbe and Torvi about Hali’s death.

Bjorn seems to be having his own trouble with Olaf and Harald scheming against him during the voting of the King of Norway. Meanwhile, Ivar seems to have seen a ghost, when he sees Oleg’s wife, Katya. She is a doppelganger of his wife, Freydis, who he killed for betraying him. ‘Vikings’ sets the ball rolling by this time, as we come to the final cluster of episodes in Season 6.

Upon reaching Kattegat, Lagertha’s injuries prove to be too much, but she tries to reach Ubbe and Torvi. In his depraved state, Hvitserk believes her to be a monstrous creature and kills Lagertha. The ripples of this action are felt immensely, especially by Bjorn, who shares a tender moment of goodbye. We are given some time to grieve this character’s death before the show throws us back into the action.

Bjorn banishes Hvitserk. Ubbe and Torvi finally decide to sail to Iceland. At the same time, Oleg decides that his soldiers should test the borders of the kingdom he plans to conquer. Ivar gets Oleg to let him lead a scouting party. This party comes across Hvitserk, as he is reunited with Ivar. After teasing the inevitable conflict between Ragnar’s sons, for the entire season, the mid-season finale shows us the start of the epic battle.

As Bjorn and Ivar draw up battle plans, Harald informs the former that he is overanalyzing things. However, when we see Ivar’s plans, we know he has some surprises up his sleeve. Katya tries to put the moves on Ivar, who refuses out of fear of Oleg’s retribution. However, Katya also seems to know of Ivar’s dealings with Dir, who he rescued from Oleg’s clutches. She seems to be on his team, but a glance at Oleg, who has been spying on them, belies her intentions.

Ivar might be walking into the setup, but Bjorn’s personal life has its own problems in the meanwhile. Harald covets Gunnhild, Bjorn’s first wife, but approaches Ingrid, his second wife, to be the Queen of Norway. When she refuses, Harald rapes her. Before any infighting breaks out, the Rus army’s arrival puts everyone on the alert. The battle scenes are well depicted, but it appears that Harald falls, as does Bjorn.

There is a dreamlike sequence of Ivar and Bjorn on a beach, talking to each other. By the end of the episode, it is pretty much clear that Bjorn is no more. Ivar and Hvitserk’s celebrations seem to confirm our worst fears, but the battle has only just begun. With this in mind, there is only one question that needs to be answered.

The upcoming episodes, which make up the second part of ‘Vikings’ will show someone new taking the throne of Kattegat. It remains to be seen if Hvitserk is the mad ruler who ascends, or if Ivar claims it for himself. Obviously, there is a chance that Harald might not have died, and will finally claim Kattegat in the absence of strong opposition.

First, however, there is a battle to be won. From what the promo shows, it is evident that the army comes together, maybe in the wake of Bjorn’s death. Oleg might find it harder to carry out his plans of conquest. It also remains to be seen if Oleg’s camp is torn by infighting, with Katya playing a far more dangerous game with Ivar and Oleg, than we had anticipated.

The pieces are firmly in place, and the upcoming episodes of ‘Vikings’ will see an epic conclusion to the war and its aftermath on both Oleg and Harald’s kingdoms.