Is ‘Walk. Ride. Rodeo’ Based on a True Story? Explained

Humans have an incredible quality of persevering in the face of insurmountable odds. While bad things happen to everyone, some get the worst share of it. And it is from the struggles and the triumphs of these people that we get the most inspiring stories. Netflix’s latest film, ‘Walk. Ride. Rodeo’ follows the story of one such person who refused to bow down to the conditions that life put on what she could or couldn’t do. If you have been feeling down, or are losing faith in yourself because of a string of failures, then this film should give you a shot of encouragement. Amberley Snyder’s story will teach you how will-power and dedication will get you exactly where you want to be, no matter how much the rest of the world doubts your abilities. Going into the discussion of the film, there’ll be a lot of details ahead, and if you haven’t yet seen the film, then I suggest you stop here and come back after you’ve finished watching it.

Saddle up! SPOILERS AHEAD.

The film begins with a young girl, on her horse, ready to rodeo the next barrel race. From the looks of it, she is a pro at it, and she is just 19. The future is very bright for Amberley Snyder as she looks over her options, working out the balance between rodeoing and attending college. Her whole family appears athletic. Her father manages a baseball team and is currently in Hawaii, while her siblings have their own achievements, especially her younger sister Autumn, who is also beginning to show some talent for the rodeo. Amberley packs up her bags to leave for two weeks, “working retail at the National Western Stock Show” because she needs the money for her pro permit. She packs her bags and drives away. But, on the way, she needs to look at the map, for which she takes off her seatbelt. A second’s distraction from the road leads to a horrifying accident in which she is thrown out of her car and gets seriously injured. After the surgery, she is told that one of her vertebrae has been crushed, due to which she will never walk again. For the time being, it seems like riding and rodeoing will become a thing of the past for Amberley. But, for someone who “could ride a horse before they could walk”, giving in can never be an option.

Who is Amberley Snyder?

Born in southern California, Amberley Snyder had the advantage of growing up in a family of athletes. Her father had a successful baseball career, and perhaps it was his sportsmanship that was passed down to his children. When she was just three years old, Amberley’s riding lessons began and after that, there was no turning back. By the time she was nineteen, she had already won the Little Britches World Championship. Even though the film mainly focuses on barrel racing, Snyder had also participated in events like pole bending, breakaway roping and goat tying.

In case you are not familiar with any of the above-mentioned events, here is a concise gist for you. Goat tying, as its name suggests, involves riding into the arena, catch a goat that is there somewhere, and tie three of its legs. After you have finished, the goat should remain tied for the next six seconds. This event doesn’t count as a professional rodeo event. Breakaway roping is an advanced version of goat tying. For starters, a calf is used in it, and it is given a proper head start before the rider can chase it and try to throw a lasso around its neck. Pole bending doesn’t involve any animals, other than the horse. There are a number of poles lined up along the way and the rider has to run through it following a serpentine path. In all these events, including barrel racing, the fastest rider wins. Timing is all the game here. Barrel racing involves three barrels set in the arena, with the rider’s task being to finish a cloverleaf pattern around it in the smallest time window. 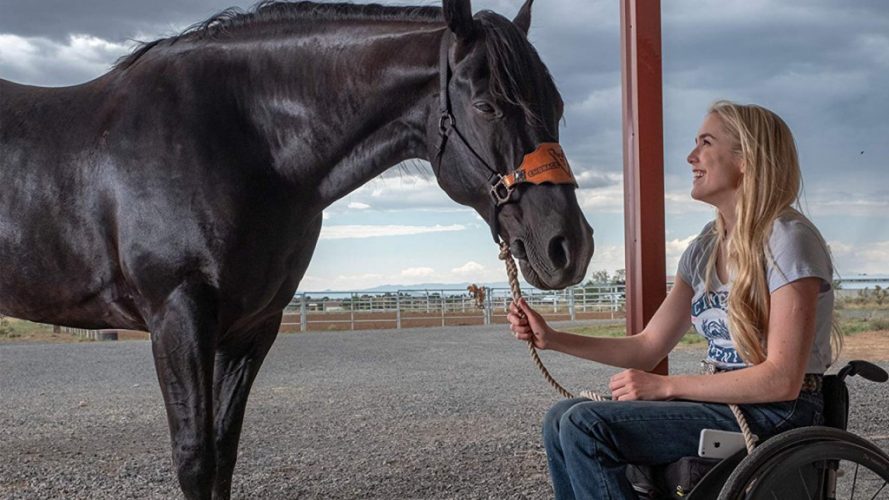 The first three events were just fun play; it was the barrel racing that counted the most and Amberley excelled at it. She was a natural at it and had formed a strong bond with her horse, Power. Everyone knew that she was made for better things, and she proved it even in the wake of her accident. Just as it was shown in the film, Amberley was brutally injured in the crash. Most of what you saw was exactly as she had described it. An exceptional thing about her was how alert she was after she found herself lying by the fence. She seemed calmer than the man who tried to help her. It was at this instance that the audience was shown that this particular person will not accept to be victimised by her circumstances.

As it often happens in biopics, the filmmakers, in order to confine the story into a mere two-hour film, make time jumps. So, the things that had actually taken years of dedication seem to have happened within months in the film. In ‘Walk. Ride. Rodeo’, however, there weren’t many time jumps. Amberley quickly took reins of her condition and dedicated herself to physical therapy. As she mentions to her trainer in the film, which is a page taken straight out of her real life, she knew exactly what she wanted out of her therapy. “Walk. Ride. Rodeo.” She wouldn’t settle for anything less. Just four months after her accident, she was back on the saddle. And sometime later, she wasn’t just riding, but competing in various tournaments, including the chance to compete with some of the best rodeos in the American where she received a standing ovation from the whole stadium. For someone who was told that they have been paralysed for life, Amberley surely proved herself to be the rule bender.

Even though biopics claim to tell a real-life story, it’s not foolish to think that some facts have been twisted, or an event fiddled with just to add a bit more drama to the story. ‘Walk. Ride. Rodeo’ is one of the most faithful adaptations of someone’s story on the big screen. However, and quite understandably, it has some factual errors as well. 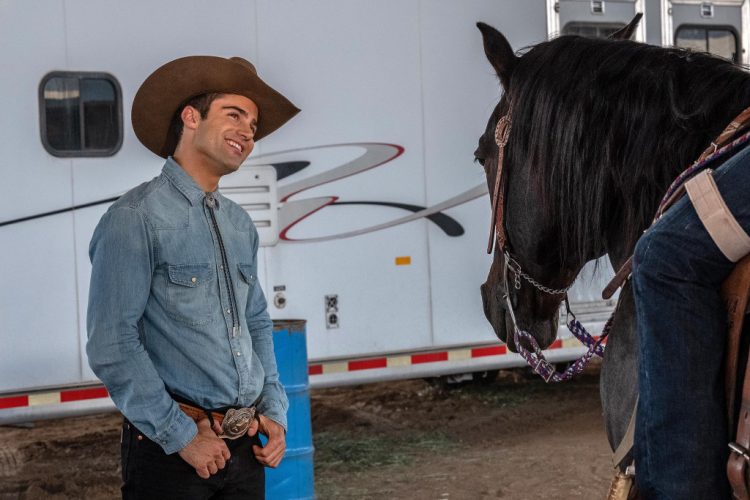 Let me break your bubble by telling you that the character of Tate Watkins wasn’t real. He was a fictional character added just to bring a touch of romance to the story. If you had a crush on him, I feel sorry for you. Really!

The accident was quite accurate except the fact that she didn’t unbuckle her seatbelt to reach the map. She had already undone it because of some other reason. The reason for her trip was also tampered with. In the film, it was told that she was going away for two weeks to work in retail. In reality, she was going to the Denver Stock Show and Rodeo.

When Amberley was in therapy, she had issues with balance. In the film, it was shown that her father surprises her by bringing the saddle to her. In real life, however, she always knew that a saddle was the place where she knew that she’d be able to achieve that balance. She asked her trainer to consider it, but he rebuffed her ideas a couple of times before she called her father and told him to get a saddle to her.

Other than these things, which seem trivial nit-picks in comparison to the bigger picture, most parts of the film was very close to reality. Her mother was the most integral part of the building of her career, and her rehabilitation of it. The first time that Amberley saddles her horse after the accident, she becomes depressed because she realises that it’ll never be the same for her. This was a very accurate portrayal of what she actually felt at that time in real life. Whether or not she asked her mother to sell their horses, it did take some convincing from her mother to get her back in the game.

Where is Amberley Snyder Now? 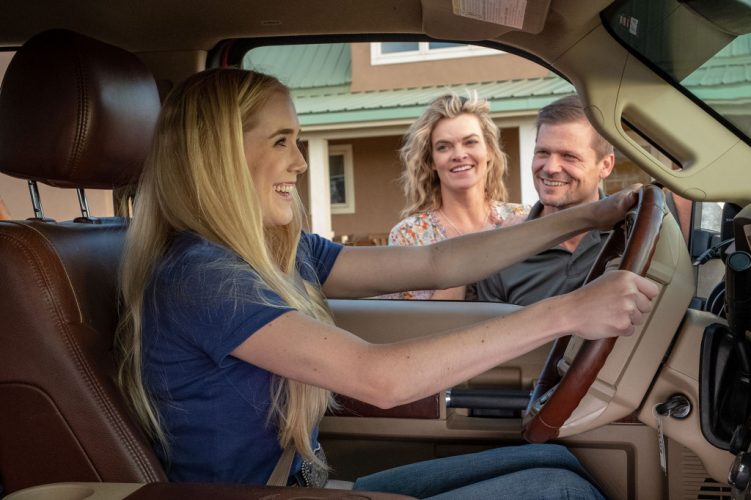 The film ended with the message that Amberley continues to compete in rodeo events. Just last year, she completed her Masters from the Utah State University and continued to participate in college-level rodeos. Her story became a source of inspiration for people all over the country, and she was invited to speak in various events to share her story and help others. Apart from being a motivational speaker, Amberley has a massive fan following on social media. She continues to spread awareness and inspire people by making videos about her daily struggles from life on a wheelchair. You can catch these videos on her Wheelchair Wednesdays section. In fact, she was one of the stunt doubles for Spencer Locke, who portrays her character in the film. In the pre-accident section, the stunts were performed by Autumn Snyder, Amberley’s younger sister, the same little girl you get to meet in the film. For the post-accident stunts, the filmmakers believed that if someone else performed the stunts, someone who wasn’t familiar with the struggles that came with paralysis, it wouldn’t feel real. In fact, it was Snyder who suggested that she should be the one performing those scenes. Quite fitting!

Amberley has shown how one’s inner strength matters more than their physical strength. If you make up your mind about something, the body will follow the course. She has achieved her goal of riding and rodeoing, but that doesn’t mean that she has forgotten the walking part. In fact, things have gotten better for her in the past couple of years, and she is pretty sure that sooner or later, she’ll walk again. Remember how the doctor said that her vertebra was only partially damaged? With all that she had already achieved, it would be foolish to bet against anything she puts her mind to. You go, girl!