The Story of Warren Beatty 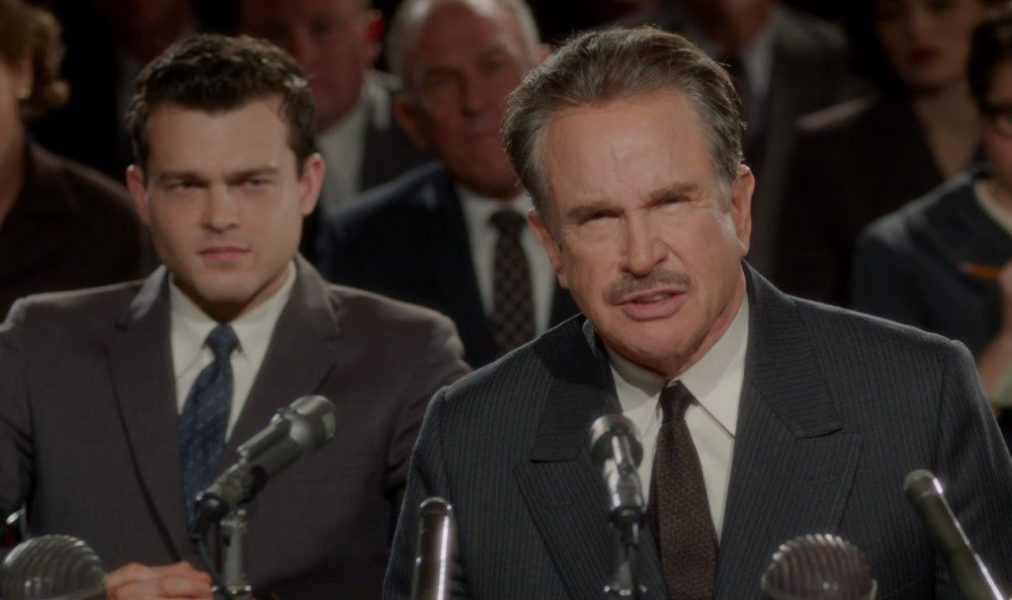 Warren Beatty last directed a film eighteen years ago, the superb political satire Bulworth (1998) which saw the gifted filmmaker portray a rapping, truth-telling senator one step ahead of a hit man he hired to take himself out, before discovering the truth, and that people love him when he tells it. One of the finest political films of its kind, the picture deserved a great deal more than the single screenplay nomination it received, Beatty should have been a nominee for actor and director, yet again. Before that, he directed Dick Tracy (1990), bursting with primary colors and bizarre make up, a solid, entertaining, wildly imaginative film that was nominated for seven Academy Awards. Like a comic strip come to life, the use of the primary colors allowed the director to capture the look of the newspaper comic from so long ago. Nine years previous he won the Academy Award for Best Director for his epic Reds (1981), which earned a whopping 12 Academy Award nominations, including four for Beatty personally, Best Actor, Director, Producer and Screenwriter, the second time he had achieved that feat and the first to do so since Orson Welles. The first time Beatty did it was for his comedy Heaven Can Wait (1978) a remake, a damned good one of Here Comes Mr. Jordaon (1941).

In all Beatty himself has been nominated for fourteen Academy Awards, including four for Best Actor and twice for Best Director. When he married actress Annette Bening he settled down into the role of husband and father, and though he talked a lot about making movies, he did not, putting his long-awaited Howard Hughes project on the back burner.

We finally get to see Beatty as Hughes in ‘Rules Don’t Apply’, a man he has been fascinated by his entire life, someone he shares more than a bit in common with. It is not the film we expected, many hoping for a character study of Hughes in his old age and darkest time, holed up in a Vegas hotel, seen only fleeting, a long beard, finger and toenails along with it the physical decay.

Instead Beatty has made a whiz-bang screwball comedy recalling the films of days gone by, set in old Hollywood, that is the Hollywood Beatty arrived too in the late fifties. Howard Hughes was still a presence in the business, but fast becoming a mystery man. Superbly cast as Hughes, the actor portrays him on the edge, slowly beginning toe descent into madness, a daffy dude to say the least, used to getting his own way when he asks for it, used to all that his billions would by. In the canon of Beatty performances it is one of his best, perhaps second to his raving Bugsy Siegel in Bugsy (1991) and could easily be among the final for for the Academy Award. Hollywood loves Beatty, his career having spanned sixty years, and gone through many evolutions, and I suspect they have been waiting for a chance to honor him once again.

Beatty is one of the few actors left who worked with such giants as Elia Kazan and George Stevens, one of the artists to take charge of his own career and go to Jack Warner to ask to produce a film, Bonnie and Clyde (1967). Warner laughed at the upstart actor, but Beatty’s persistence wore him down and he was given the green light to make the film, which of course was responsible for the beginning of the New American Cinema. Both artist and movie star, Beatty chose his roles carefully, with an eye to learning as much as he could about the craft of directing, before finally stepping behind the camera for Heaven Can Wait (1978). Though he co-directed the film with Buck Henry anyone who thinks Henry had anything to do with directing the picture does not know Beatty….at all. In fact there have long been rumors that Beatty had a lot more to do with directing Shampoo (1975) than the director credited with the film, Hal Ashby.

I suspect Reds (1982) will always be his masterpiece, a superb epic film that never lost site of its intimacy in exploring the love between two writers and their obsession with the Bolshevik Revolution and history. In one of the early scenes in the film we watch Beatty as Jack Reed chasing fighters as war goes on all around them, forever chasing history. The film has the majesty of a David Lean epic, the breathtaking sequences of the revolution, the sun soaked sequence in the desert as they move by locomotive, camels suddenly appearing outside their window. Yet it is also his most human film, fearless to look at the characters flaws and all, even calling on witnesses to the events and their lives to speak on them. Though the film did not make a lot of money it was the recipient of rave reviews, some critics hailing it as the greatest American film since Citizen Kane (1941). For Reds (`1981), he will be immortal.

He represents one of the last connections to old Hollywood, but is also a pioneer who altered the course of cinema, revolutionizing the art, recognizing film could be about something, should be about something, and having the courage to do something about that. Blessed with a laser intellect, and constant curious mind, Beatty is always thinking, analyzing. It is interesting that he chose to make his Hughes film an old-fashioned screwball comedy with the actors fast talking patter precisely like the films of the forties and some of those in the fifties. Perhaps he wanted to remind audiences of where film came from, the beginnings of screen comedy, the history, perhaps he saw this as the best way to present Hughes after Scorsese and DiCaprio did such a great job on The Aviator (2004) or perhaps he just wanted to have fun on a film set working with people he likes and admires. Nonetheless the film beautifully connects Hollywoods past and Beatty’s past to the present in an entertaining and rollicking manner. Martin Sheen, Lili Collins, Alec Baldwin, Matthew Broderick, and a host of other new and older actors populate the film, but this is Beatty’s show.

Should he be nominated this year he might also see his wife nominated for her work in 20th Century Woman, and would not be thrilling to see the couple take home his and her’s Oscars?