Will There be Season 2 of Warriors of Liberty City? 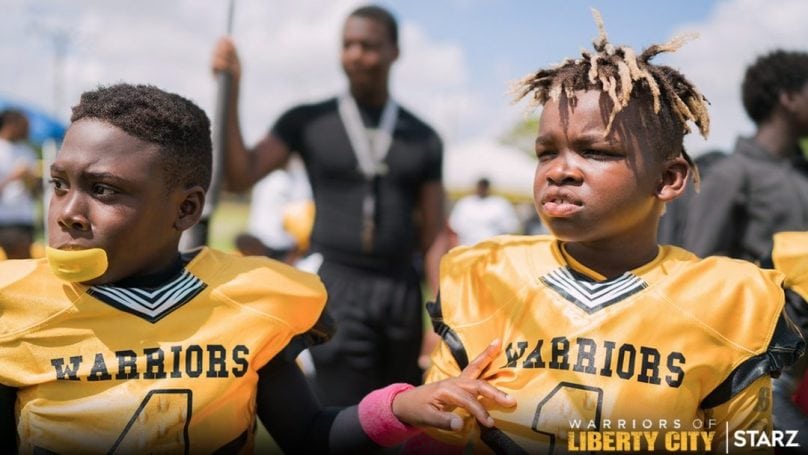 Documentaries – as the regular consumers of both the umpteenth whodunnit from ID and the single-camera take on the unabashed evil face of the Nigerian oil industry, the same theme can take on multi-facade forms depending on what spectrum of events is picked and how it is depicted. Sloppy procedural-cop clone true crime and journalistic research on the war on drugs with actual merit, however, will often garner about the same traction among a documentary-watching audience based on how well-polished and well-produced (even overproduced) it is.

In this light, sports documentaries occupy a curious area between genre and demand. On the one hand, there are the very rare sparks of brilliance scattered throughout the decades – take for example arthouse George Best (Football As Never Before, 1971) or the 1977 story about the Paris-Roubaix Spring Classic (A Sunday in Hell). On the other hand, there is the perfect marriage between a tame journalistic outlet, and the epic orchestra-adorned milking of a brand – looking at official films from FIFA.

Earlier in 2018, we had the latter gripped by Netflix (no surprise) with First Team: Juventus. Thankfully, the brand-catering and technical mediocrity do not have to mean a lack of subjects worth exploring in the sports world. Grassroots-level ventures to bring sports to the youth is perhaps one of the most immediate impressions on the template. This is what Starz‘s Warriors of Liberty City essentially is – a look at an inter-city youth football program in Miami.

Warriors of Liberty City Cast: Who is in it?

A sports documentary will usually fulfill the star-power quota simply with the sports personalities it focuses on or at least partially covers. This is not the case with Warriors of Liberty City. Like with the modern documentary fashion, the whole show-reel for it consists of interviews with persons of interest – the Miami teenagers who play ball on the ground, the parents, and the coach for the most part. The only somewhat news-worthy face among them would be political activist Luther Campbell, who introduces The Warriors in the first episode. There is no third-person narratorial voice, and therefore when the credits roll, there is virtually no cast to speak of. Season 2 should follow in the same fashion if it is recommissioned.

Warriors of Liberty City Plot: What is it about?

The chief distinction made between documentaries and TV dramas is that the former deals in facts, not fiction. But one core element remains constant between the two: documentaries are also about storytelling. And in a world where the Big Sports industry has dragged its brand-placement well into the documentary territory from entertainment, Warriors of The Liberty city ditches the big NFL tags, the fanfare, the money-earning slogan-fest and finds a story worth telling.

Warriors of Liberty City backtracks its footsteps into ‘Hoop Dreams’. Hoops Dreams, being 1994’s biggest docu-film and dubbed the best film of the ’90s by Roger Ebert, is miles ahead in artistic merit, but it shares the same backdrops and thematic centres with Warriors of Liberty City. Rather than just basketball as such, Hoop Dreams establishes the sport as a totem of Chicago Street culture – and the same link is stressed between baseball and the dream of the Liberty City underprivileged youth.

On the surface level, Warriors of The Liberty City is about just another street-level inter-city baseball tournament deep under the sky-scraping hierarchy of association football in the US. However, this program, doubling as a serious training regime also signifies the core elements about every sports documentary thrives on – the dramatic rise to glory.

Football, rather than a playground, is the teen player’s ladder of hope to climb out of the clutches of a rough Miami neighbourhood into success in life. This practically hands the show an elaborate rags-to-riches blueprint, but rather than just harping on it to build a narrative, the six-part TV show attempts to keep the core focus on the need of football, the biggest pillar of the US sports entertainment industry, in the dingy suburbs without pomp or privilege.

Warriors of Liberty City Season 2 Release Date: When will it premiere?

Warriors of Liberty City season 1 premiered its first half-hour episode on September 16, 2018. In its six-episode arc, the show seems to wrap up a self-enclosed narrative.

The show had some good reception – enough to perhaps warrant a second season had it been a standard TV show. But the self-contained nature of it makes it seem like a one-off, like nearly all of the docu-shows of its scale and the akin subject usually are. Combine that with no announcements made so far on the future prospects of the show, and a second season seems very unlikely. If it were yet to happen somehow, however, our guess would be a Q4 2019 or early 2020 release date for Warriors of Liberty City season 2.

Since it is uncertain whether a show like Warriors of Liberty City can have a sequel greenlit at all, we will have to wait for further updates from Starz and the producers. Anyhow, while you wait for this piece of news, this also makes it a great time to watch the original six-episode season if you haven’t already. You can watch the trailer for the same here.