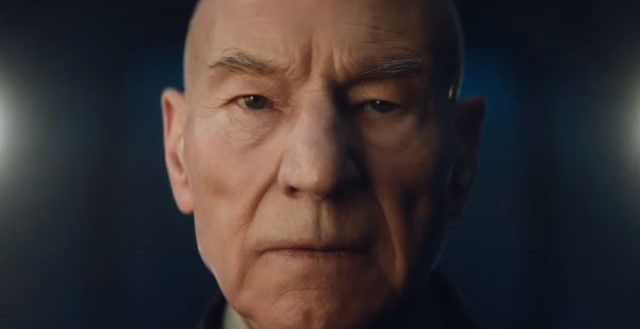 CBS All Access has released the first teaser trailer for the upcoming series ‘Star Trek: Picard.’ The ‘Star Trek‘ spin-off series marks the return of Patrick Stewart as his iconic character Jean-Luc Picard, the maverick captain who commanded the USS Enterprise-D on ‘Star Trek: The Next Generation.’

The teaser opens up with images of a wine vineyard possibly on earth as a voiceover begins chanting the feats of Captain Picard’s career in Starfleet. A man walks through the vineyard’s long paths and ridges while we see his shadow. When the voiceover says, “You commanded the greatest rescue armada in history. Then, the unimaginable,” we learn that the man is Picard.

Then the voiceover asks the man, “Why did you leave Starfleet, Admiral?” The voice finally addresses “Admiral Picard” directly and Stewart’s face comes to the full screen. His expression is that of a man who is lost in his own thoughts or someone who desperately searches for a lost memory. Upon hearing the question, he seems to reply but the teaser ends with the tagline “The end is only the beginning,” while the question lingers on our mind. According to Variety, the end hints that the upcoming series will explore the actual reasons for Picard’s departure from the Starfleet.

‘Star Trek: Picard’ is the eighth live-action series in the franchise and the first one bearing a character’s name as the title, reports THR. It means the makers want to make the maximum out of the legacy of Picard and there is more to narrate. Stewart had reportedly been reluctant to play the same character after such a long break. He stepped into the shoes of Picard and made the character immortal with the 1987 series ‘Star Trek: The Next Generation.’ He played the Next Generation Captain for seven seasons of the series and in four features.

Check out the first teaser trailer for ‘Star Trek: Picard’ below.

No premiere date is set for the series yet.