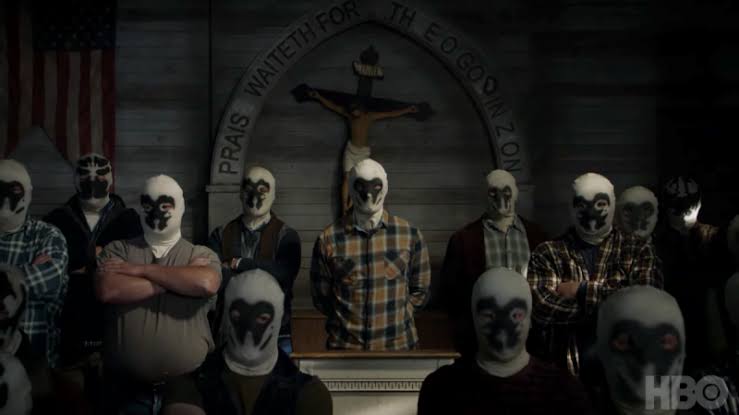 I wouldn’t necessarily be going out on a limb when I term ‘Watchmen’ by Alan Moore to be arguably the most complete and incredibly drawn graphic novel in the comic book fandom despite not belonging to any of the cannon comic book factions, and Zack Snyder’s 2009 film to be, yet again arguably, the best comic book adaptation in my opinion. Well, for the most part.

Sure, its merits as a film may be up for contention with several other well-made superhero films of this decade even, but there is no beating ‘Watchmen’ when it comes to faithful adaptations, with Snyder bringing alive several of Moore’s panels without compromising on the grit, darkness and violence that made the graphic novel such a hit. However, as good as it was over the filmic medium, the TV medium with the narrative of the source spread over multiple episodes can only excite fans for a return into the lush world of the graphic novel.

Even though the show is not a faithful adaptation of Moore’s source material, with several tweaks in the original storyline, timeline as well as characters, Damen Lindelof has a great job in ensuring that it remains relevant and highly entertaining.

Watchmen Episode 4 Release Date: When Will It Premiere?

Watchmen episode 4 will premiere October 10, 2019 at 9 pm EST on HBO. It is titled If You Don’t Like My Story, Write Your Own and will introduce reclusive trillionaire Lady Trieu as she enters the stage with a mysterious offer.  The episode will also follow Blake, who is getting closer to the truth of her coverup as Angela enlists Looking Glass for help.

Where to Stream Watchmen Episode 4 Online?

‘Watchmen’ is an HBO show, so you can catch it on HBO Go or HBO Now. However, you need to be subscribed to these platforms. Prime subscribers can also catch ‘Watchmen’ by adding the HBO pack to their existing plan for $14.99 per month. Check it out here.

Watchmen Plot: What Is It About?

In a lengthy five page letter to the fans of the source material, Damon Lindelof, serving as creator, executive producer and writer for the show for HBO stated that the new series would not be a direct adaptation of the source material, with some changes in the original storyline to tell an “entirely new story”, albeit in the same world that the events of the original novel took place, even calling himself “the unscrupulous bastard currently defiling something that you [the audience] loved”. You perhaps may not be able to fathom the degree of change that Lindelof is about to bring in with the new adaptation, but this should help you form a rough idea.

The primary change, of course apart from the very plot itself being tweaked, that is, would be the timeline of events, with the series being based in contemporary times instead of the Second World War period and later, as with the source material. In that, the series set in 2019, roughly thirty four years after the events of the comic book, would serve as a sequel of sorts to the original. The 2019 here would be an alternative reality with no internets or smartphones.

Amidst rising uncertainty and distrust towards masked vigilantes leading to them still being outlawed, and Robert Redford (yes, the actor) being the longest serving president of the US since 1992, the story set in Tulsa, Oklahoma would focus on a new white supremacy group of vigilantes calling themselves “The Seventh Cavalry” wearing makeshift Rorschach masks claiming to have the addresses of a number of policemen who they intend to kill. There are other vigilantes too out there to stop this from happening, in particular Detective Angela Abar, who takes up the vigilante alter ego Sister Night, along with several other additions to the cast and list of vigilantes.

The second major change that I was talking about would be the characters, and the only characters returning from the original storyline would be Dr. Manhattan, the former Silk Spectre and a reformed Ozymandias, implying that the original Rorschach and Nite Owl II are long gone. The series would thus employ a narrative style that would involve storytelling from the point of view of these characters, as opposed to Snyder’s either strict third person narrative, occasionally also told through Rorschach’s perspective. The one looming, overarching thread that it does seem to have in common with the graphic novel would be its critique over the very nature of vigilantism, and the larger question of “who watches the Watchmen?” Just the catchphrase’s presence and/or anticipation is enough to get me hyped for the show currently.

Watchmen Cast: Who Is In It?

HBO has assembled a long lineup of incredible talent for the series, although none of the actors from Snyder’s screen adaptation would be returning, even if some of the characters are. The cast includes Regina King as Det. Angela Abar / Sister Night, Don Johnson as Chief Judd Crawford, Tim Blake Nelson as Looking Glass, Louis Gossett Jr. as Will Reeves, Adelaide Clemens as Pirate Jenny, Andrew Howard as Red Scare, Jeremy Irons as Adrian Veidt, Jean Smart as Laurie Blake, Yahya Abdul-Mateen II as Cal Abar, Jacob Ming-Trent as Panda, Frances Fisher as Jane Crawford, Tom Mison as Mr. Phillips, Sara Vickers as Ms. Crookshanks, Hong Chau as Lady Trieu, James Wolk as Senator Keane, Dylan Schombing and Lily Rose Smith in undisclosed roles, Adelynn Spoon as Emma Abar, Dustin Ingram as Agent Petey, and ofcourse, Robert Redford as President Robert Redford, which should be devilishly fun to watch.

Another thing that I can say looking at the cast is that they couldn’t have found a better person to play the older Ozymandias than the legend that is Jeremy Irons.

Watchmen Crew: Who Is Behind It?

As stated in the opening paragraph, Damen Lindelof for HBO would be serving as the creator, writer, executive producer and possibly showrunner for the first season of the show due in October. The first episode in the series is being directed by Nicole Kassell based on the script off of Lindelof.

Both the trailer and the teaser that HBO threw our way have done little to settle the intrigue surrounding the show, seeing as though a lot of people still seem to be unaware of the fact that this is going to be nothing like the novel or Snyder’s film. Although I like the “tick-tock” teaser better for its relentless teases, I am going to be attaching here a link for the trailer for a fuller look on what the series is going to be about. Watch away!