The Week That Happened: Cannes 2016 Kicks Off; ‘Assassin’s Creed’ Trailer is Out and More 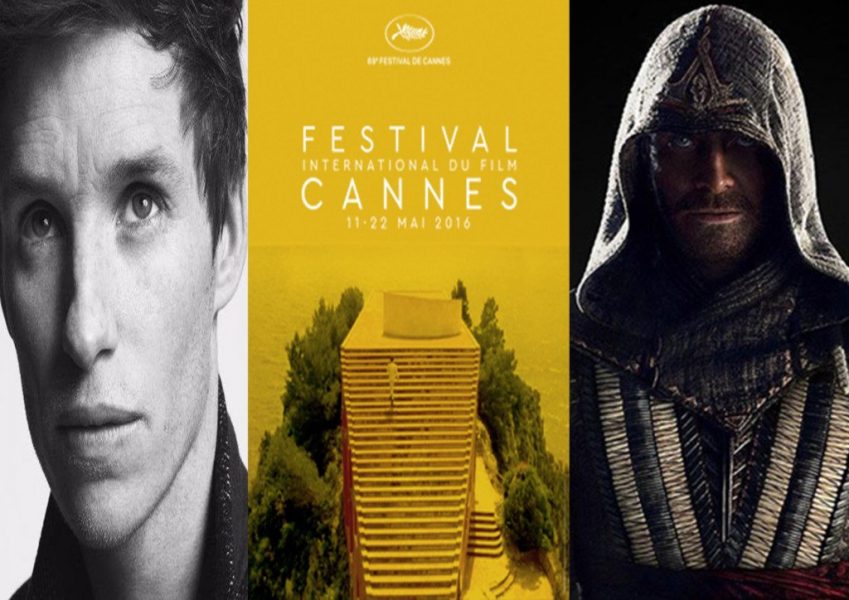 Eddie Redmayne has joined Aardman Studio’s prehistoric comedy adventure ‘Early Man’. The stop-frame pic is about creatures and woolly mammoths that inhabited earth during pre-historic times. Redmayne will give voice to the character of Dug, a plucky caveman, who embarks on a battle against the mighty Bronze Age. The film is set to be directed by Nick Parks who last directed the Oscar winning animated comedy ‘Wallace & Gromit: The Curse of the Were-Rabbit’. The movie is scheduled to be released in early 2018.

Guillermo Del Toro’s new movie, which is rumored to be titled as ‘The Shape of Water’ has approached Michael Shannon to play the negative lead. It is a supernatural romantic movie which stars Sally Hawkins, a mute laboratory worker, who falls in love with an amphibious man who is held captive. The movie also stars Octavia Spencer, Michael Stuhlbarg and Richard Jenkins. Del Toro’s last directed movie was the 2015 romantic ‘Crimson Peak’.

Idris Elba is in talks to join the Jessica Chastain starrer ‘Molly’s Game’. The movie is the directorial debut of Academy Award winning screenwriter Aaron Sorkin. It is based on the memoir’s of Molly Bloom, who after taking an year off before law school becomes a millionaire by running an exclusive high stakes poker game in the world. Jessica Chastain is in final negotiations to star as Molly Bloom. The script is also being written by Aaron Sorkin who last wrote the critically acclaimed 2015 drama ‘Steve Jobs’.

Richard Gere is set to star as a doctor in Jon Avnet’s new comedy drama ‘Three Christs’. It is the second collaboration between Avnet and Gere after the highly controversial 1997 movie ‘Red Corner’. It is based on Rokeach’s Christs of Ypsilanti: A Narrative Study of Three Lost Men, a biographical novel by Milton Rokeach. The movie is about a doctor treating three paranoid schizophrenic patients who all believe they are Jesus Christ.

Clive Owen to Star in ‘Andorra’

Clive Owen joins the new directorial venture of Australian director Fred Schepisi. The movie is based on the novel of the same name written by Peter Cameron who is also adapting it for the big screen. It is about an American who settles in Andorra only to be linked to a dead body floating in the harbour. This is the second collaboration between Owen and Schepisi after the 2013 movie ‘Words and Pictures’.

Ridley Scott is set to direct’ Wraiths of Broken Land’, a movie adaptation of S. Craig Zahler’s novel of the same name. The novel is set in the mexico during 1900 when two sisters were forced into prostitution and how their two brothers and father embark on a mission to rescue them. Ridley Scott is re teaming with Drew Goddard who earlier wrote Scott’s 2015 space drama ‘The Martian’.

Noomi Rapace to Star in ‘Boy’

Noomi Rapace who is known for her roles in the Swedish adaptation of the Millenium Series: ‘The Girl With the Dragon Tattoo, ‘The Girl Who Played With Fire’ and ‘The Girl Who Kicked the Hornet’s Nest’ is set to star in ‘Boy’. The film will be directed by Jonas Arnby, Danish film director, whose directorial debut ‘When Animals Dream’ was screened at the 2014 Cannes Film Festival. The script written by Mattson Tomlin was named to the 2015 black list. The film centers on a teenage boy who possesses special abilities. When he is blamed for a tragic event, he and his mother seek the support of an underground rebellion group.

Lupita Nyong’o in Talks to Star in ‘Black Panther’

Lupita Nyong’o is in talks to star in Marvel’s superhero movie ‘Black Panther’. Nyong’o has been offered the role of Chadwick Boseman’s love interest. Boseman plays T’Challa, a prince who must take over the mantel after his father’s death. Ryan Coogler, known for directing the 2015 drama ‘Creed’ is on board to direct this film.

Helen Mirren to Star in ‘The Leisure Seeker’

Helen Mirren and Donald Sutherland have been confirmed to play the leads in Paolo Virzi’s English language debut ‘The Leisure Seeker’. Virzi, an Italian director, garnered international fame after directing ‘Human Capital’ which premiered in 2014 at Tribeca. His latest film ‘Like Crazy’ will premiere at the Director’s Fortnight of 2016 Cannes Film Festival on Saturday. ‘The Leisure Seeker’ is based on the novel by Michael Zadoorian about a couple in their twilight who take a road trip from Boston to Florida. Both Mirren and Sutherland were last seen together as a married couple in Philip Borsos-directed China-set saga ‘Bethune: The Making of a Hero’.

‘Inferno’ is an upcoming American mystery thriller film directed by Ron Howard. Tom Hanks reprises his role from the previous films as Robert Langdon. The film is based on the novel of the same name by Dan Brown. It centers around Langdon’s  quest for freedom and lost memories, all while trying to solve a near impossible riddle. The film also stars Felicity Jones, Omar Sy, Ben Foster and Irrfan Khan. It is written by David Koepp who also wrote the screen adaptation for ‘Angels and Demons’. Here is the teaser:

‘Queen of Katwe’ is an upcoming biographical film starring David Oyelowo and Lupita Nyong’o. The film is based on the life of Phiona Mutesi, an Ugandan chess prodigy who, after her performance at World Chess Olympiads, become a Women Candidate Master. The film is directed by Indian film maker Mira Nair. Here is the trailer:

‘The Woods’ is an upcoming horror film directed by Adam Wingard who is known for directing the  2011 black comedy slasher film ‘You’re Next’. The film is written by Simon Barrett who frequently collaborates with Adam Wingard. The film stars Callie Hernandez, James Allen McCune, Brandon Scott, Wes Robinson and Corbin Reid. It is about a group of college students who discover that they are not alone in their camping trip. Here is the teaser:

‘Nerve’ is an upcoming American thriller film based on the 2012 novel Nerve by Jeanne Ryan. The film is directed by the duo Henry Joost and Ariel Schulman, known for directing ‘Paranormal Activity 3’ and ‘Paranormal Activity 4’. It stars Emma Roberts, Dave Franco, Kimiko Glenn, Juliette Lewis and Emily Meade. The film is about junior “Vee” who enters into a truth or dare game which ascends to dangerous levels. Here is the trailer:

‘Assassin’s Creed’ is an upcoming action adventure film which is based on the hugely successful video game franchise of the same name. It is directed by Justin Kurzel, best known for directing films like ‘Snowtown’ and ‘Macbeth’. The film stars Michael Fassbender in the lead along with Marion Cotillard, Michael K. Williams, Ariane Labed, Jeremy Irons and Brendan Gleeson. The film features an original story but will be set in the same universe as the video games. Here is the trailer:

‘Billy Lynn’s Long Halftime Walk’ is an upcoming American war drama film directed by Academy Award winning director Ang Lee. The film is based on the novel of the same name by Ben Fountain. The adapted version is written by Academy Award winning screenwriter Simon Beaufoy. It stars Joe Alwyn, Garret Hedlund, Kristen Stewart, Vin Diesel, Steve Martin and Chris Tucker. The film is based on the contrasting realities of war with America’s perception through the eyes of a 19 year old Billy Lynn. Here is the teaser:

‘Hell or High Water’ is an upcoming American heist film starring Chris Pine, Ben Foster and Jeff Bridges. It is directed by David Mackenzie who last directed the 2013 universally acclaimed ‘Starred Up’. The script written by Taylor Sheridan was the winner of 2012 Black List. The film is about two brother who set out to rob a bank in order to save their family farm. It has been selected to be screened in the Un Certain Regard section at the 2016 Cannes Film Festival. Here is the trailer:

‘The Accountant’ is an upcoming action thriller film directed by Gavin O’Connor. It stars Ben Affleck, Anna Kendrick, J.K. Simmons, Jeffrey Tambor and John Lithgow. Ben Affleck plays a math genius who is an accountant but secretly works as an assassin for some of the world’s most dangerous criminal organizations. Here is the trailer:

‘Don’t Breathe’ is an upcoming American horror film starring Dylan Minnette, Jane Levy, Daniel Zovato and Stephen Lang. It is directed by Fede Alvarez best known for directing Evil Dead reboot. Alvarez along with Rodo Sayagues has written the script for the film. The film is about a girl and her gangster boyfriend who tries to rob a house of a blind man who has a safe locked in his basement. Here is the trailer:

‘The Light Between Oceans’ is an upcoming drama film written and directed by Derek Cianfrance who is best known for directing films like ‘Blue Valentine’ and ‘The Place Beyond the Pines’. It stars Michael Fassbender, Alicia Vikander and Rachel Weisz. The film is about a married couple who informally adopt a baby girl they find washed up an on adrift row-boat. Here is the trailer:

‘Indignation’ is an upcoming American drama film, directed and written by award winning american screenwriter James Schamus, making his feature directorial debut. The movie is based on the novel by Philip Roth. It stars Logan Lerman, Sarah Gadon, Pico Alexander and Danny Burstein. The film is set during the Korean war and is about a Jewish student from New Jersey who attends a small Ohio college where he struggles with sexual repression and cultural disaffection. Here is the trailer: