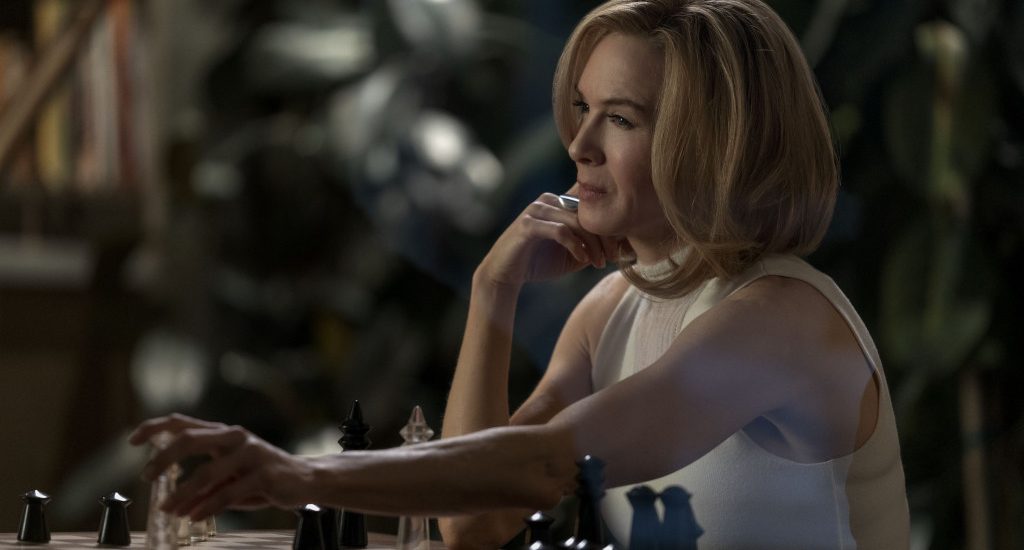 ‘Everything happens for a reason. What if we invert this notion? This is exactly the premise for Netflix’s neo-noir drama, ‘What/If’. The story of this psychological thriller revolves around the “dramatic, life-altering ripple effects of what happens when acceptable people start doing unacceptable things.”

‘What/If’ is an anthology web television show that is centered around an extremely wealthy woman and a bankrupt couple. Created by Mike Kelley the show first premiered on May 24, 2019, on Netflix. The show is directed by Robert Zemeckis, who is known for his cult films like Forrest Gump and Back to the Future.

What/If Cast: Who is in it?

Academy Award winner, Renée Zellweger leads the cast as Anne Montgomery. She is best known for her portrayal of Bridget Jones in the highly successful ‘Bridget Jones’ Diary’ franchise. Accompanying her is “Scream Queen” Jane Levy as Lisa and Blake Jenner as Sean. You must already know Levy from her roles in ‘The Evil Dead’ and ‘Don’t Breathe’. Jenner is recognized for his appearances in ‘The Edge of Seventeen‘ and ‘American Animals’.

What/If Plot: What is it about?

‘What/If’ introduces us to Lisa Donovan, a young, pretty, and talented scientist, who has recently founded  Emigen Molecular Sequencing — a medical solutions company. Her sister had died from cancer (leukemia) and after that, she dedicated herself completely to saving lives. But currently, her company is bankrupt and Lisa is in need of urgent cash. After weighing their options, she and her husband Sean approach the gorgeous billionaire, Anne Montgomery. Branded as one of San Fransisco’s richest tycoons, Anne can alter the couple’s fate with just a wire transfer. However, Anne agrees to help them under one condition — spending one night with Lisa’s handsome husband.

Well, the decision that the duo finally takes does not need much of an explanation. The funds would not only help Lisa to launch her company but would also allow Sean to start a fresh career path as a firefighter. However, things don’t go as planned. Sean returns with bloodied knuckles and a damaged soul after his night encounter with Anne. Now, in order to discover what went wrong, Lisa resolves to uncover her benefactor’s ulterior motives. And in the process, she also vows to take her down.

‘What/If’ makes for an engaging watch, because it attempts to delve deep into the themes of destiny and taking responsibility for the choices we make. Whenever we take any decision, the aftereffects are bound to follow us. The results can arrive immediately or over a period of time. And in this show, it just happens that the aftermath comes in a series of twisted turns.

Kelley confirms this in an interview with Variety that, “In the first scene, Renée’s character Anne Montgomery says everything happens for a reason. I think about that a lot. The context for that is generally that the things that happen to us are out of our control and that fate plays a larger role than our personal responsibility and decision-making. I like to fight against that because I believe it’s certainly equal measure, but for the most part, we’re the captains of our own destiny.”

‘What/If’ may be a psychological thriller, but it attempts to elaborate on how lives can transform in an instant. When people make bold, scary, and controversial choices, which challenge social norms, it’s not always necessary that the risks result in negative results. Sometimes, we may also reap the benefits of such life-changing decisions. However, in this case, the couple’s lives are impacted in a much more devastating manner (or so it seems in the beginning).

Inspired by thrillers from the 1980s and 1990s such as ​’Fatal Attraction’,​ ‘The Hand That Rocks the Cradle’, ​and ‘Indecent Proposal’, ‘What/If’ is a female-centric series, which makes it a complex, fascinating watch. Anne, a calculating, conniving, deadly and ferocious survivor, is a femme fatale who holds the belief that when you give away your trust, you give someone the power to destroy you. And of course, as you see Anne’s deft fingers hovering over her chess board, you can comprehend that she considers everyone as a pawn, has a reason for each of her actions, and an agenda for each of her victims.

Delving into the themes of morality, secrets, and deceit in relationships, ‘What/If’ tries to explore the consequences of flawed decision-making. It is engaging, twisted, and deep — a gem of a show for fans of mind-boggling thriller dramas.

What/If Season 2 Release Date: When will it premiere?

‘What/If’ season 1 premiered on May 24, 2019, on Netflix. The show adopts an anthological format with each season taking up a completely different story. Yes, when you begin with a season, you can finish it in one go. The story has a definitive ending in every installment.

Since ‘What/If’ is an anthology series, there’s definitely a renewal underway. But will the same cast return to reprise their roles? Probably not. The new season, as per Kelley, will be set in an altogether different world. He has not disclosed anything about the casting yet; so we cannot be sure at the moment. But what about a release date? Although we don’t have any concrete news on that either, as per our best guess, we can expect ‘What/If’ season 2 to air sometime in May, 2020. We will update this section as soon as we learn more.

While we wait for an update on’What/If’ season 2, check out the season 1 trailer. If you haven’t seen the show yet head over to Netflix to catch all the episodes of the first season.