The Themes of ‘The Lodge’, Explained

The past years have seen a new wave of horror that has challenged the traditions of the genre, and in many ways, successfully redefined it. This year’s ‘The Lodge‘ is not only an important addition in this new wave, it’s also a result of it, making it one of the finest, most disturbing horror features from the recent years. The film is directed by Austrian filmmakers Veronika Franz and Severin Fiala who previously shocked the world with ‘Goodnight Mommy’ that was a mega festival hit. ‘The Lodge’ too left a lasting, lingering impact on the critics who watched it when it first premiered on Sundance Film Festival last year.

The film largely centers around Grace who has to spend a few days with her step-children in an isolated lodge during a blizzard. But things take a dark turn when certain disturbing events summon the ghosts of Grace’s dark past.  ‘The Lodge’ definitely borrows from its predecessors, but as a whole, it is nothing like anything you’ve ever witnessed before.

The past years have seen efforts being made in making horror more meaningful. Fear is after all the root of horror, and fear is all around us. You don’t always need monsters and demons when the ghosts of your past already haunt you. This is precisely what makes ‘The Lodge’ so unsettling and devastating. The horror is real, and its nerve-wrenching slow-burn will rattle you, leaving you feeling hollow in the gut. If you’re wondering what inspired something as horrifying as ‘The Lodge’, here’s everything we know.

Is The Lodge a True Story?

To answer it simply, ‘The Lodge’ is not based on a true story. But it has certainly been influenced by certain disturbing events and situations that form our reality. It is also equally important to note the influence its predecessors have had on the horror feature.

‘The Lodge’ explores themes of grief, trauma and fear brilliantly well that turns the film into an excruciatingly dark tragedy about a family. This film too, like Franz and Fiala’s ‘Goodnight Mommy‘, centers around two siblings and a woman in a big isolated house.

One also sees its resemblance to Ari Aster’s ‘Hereditary‘ on a more cinematic level with its bone-chilling slow-burn. Of course, we also have Mia’s doll’s house which creates a claustrophobic atmosphere for the horror. Stanley Kubrick‘s ‘The Shining‘ is another obvious inspiration with its similar premise relating to the maddening effect of isolation. Apart from these cinematic influences, there are also other possible real-life inspirations that ‘The Lodge’ could have taken.

Grace’s traumatic past forms one of the most crucial plot points in ‘The Lodge’. We learn that Grace is the daughter of religious leader, Aaron Marshall, and had strict religious upbringing. Her father initiated a mass suicide, killing himself and his entire cult in the event. Grace was the only survivor in the religious cult suicide, and is deeply troubled by the past. This, of course, plays out in a devastating manner as the film progresses. In reality too, there have been several religious cult suicides that have shocked the world.

One of the most famous from the lot is Heaven’s Gate that took place in 1997 in which 39 members committed suicide, including the group’s prophet. The participants were willingly involved, ingested poison and placed plastic bags over their heads. But this is still not the most horrifying example of mass suicide.

The Jonestown tragedy is one of the biggest to have ever hit America. In fact, until the 9/11 attacks, the mass suicide/massacre marked the largest number of intentional civilian deaths in a single incident. Around 900 people drank poison and killed themselves under the orders of their cult leader Jim Jones, on November 18, 1978.

Both these religious groups were apocalyptic cults, similar to Aaron Marshall’s cult in ‘The Lodge’. While suicides form the background of the horror, the film revolves around its aftermath. Grief and religion are the key themes it explores as it delves into topics relating to Purgatory, sinning and repenting. 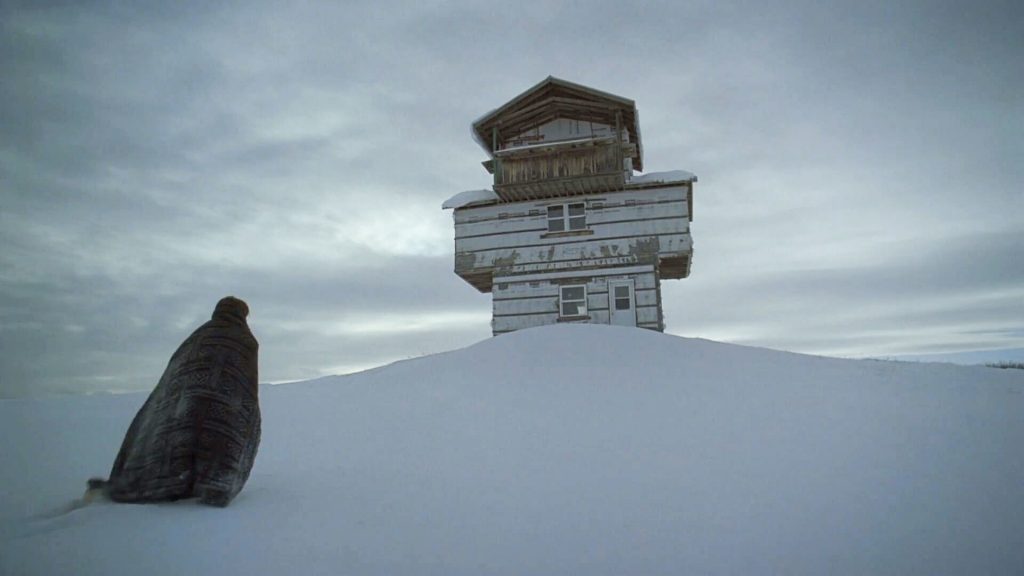 Cabin fever is commonly explored in horror films with ‘The Shining’ being its most famous example. Of course, there is much more to it both in Kubrick’s film (the hotel is haunted), and ‘The Lodge’ (with Grace’s trauma and emotional turmoil). But it remains an important trigger.

Cabin fever refers to a claustrophobic reaction to intense isolation for an extended period of time. Being trapped in the lodge during a blizzard (like Grace) can certainly cause it. It is often a state of restlessness and anxiety that could potentially lead individuals to act out in frightening ways. There have been a few disturbing incidents of it in real-life as well. In 2013, a 14-year-old child shot his foster father and another man in a hunting cabin, in Oregon’s Blue Mountains. A more recent example of this took place in Antarctica in 2018, when a researcher got arrested for stabbing his colleague.