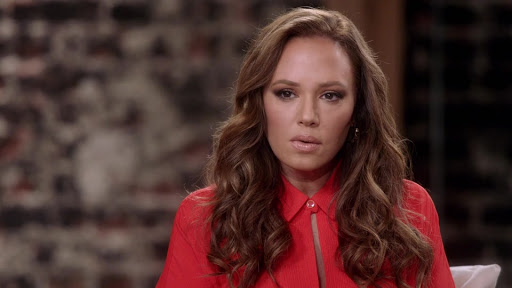 Leah Remini is an American actress, singer, writer, and most prominently, activist. ‘Friends‘ fans may remember her as the pregnant lady who Joey helps with her delivery in Season 1 (episode ‘The One With The Birth’). But Leah is best known for her role as Carrie Heffernan on the popular sitcom ‘The King of Queens’. Born in June 1970, in Brooklyn, NY, Leah is one of six siblings. Her parents are George Remini and Vicki Marshall. In 2003, Leah married Angelo Pagan and the couple has a daughter named Sofia Bella Pagan.

In her early years as a young kid, Leah was raised Catholic, but when she was 9-years-old, her mother dated a member of the Church of Scientology and soon joined up herself. They moved to Florida and lived on a Scientology compound before relocating to Los Angeles, California when Leah was 13. At age 14, Leah dropped out of school to pursue acting. Leah, having been a member of the Church of Scientology since age 9, started having problems with the organization in 2007. The issues escalated till one day in 2013, Leah decided to leave the Church of Scientology, and her family chose to also depart with her (because staying behind would have meant cutting all ties with Leah). Since then, Leah has been very outspoken and vocally critical about Scientology, and written books, and also has made an Emmy-winning TV show on the subject.

How Did Leah Remini Make Her Money?

Leah has been acting since 1988, her first role being in ‘Head of the Class’. Apart from a memorable appearance on ‘Friends’, Leah has acted in over 50 movies and TV shows, most famously, ‘Saved By The Bell’, ‘Kevin Can Wait’, ‘King of Queens’, ‘NYPD Blue’, ‘Cheers’, and ‘Evening Shade’.

From 2010 to 2011, Leah co-hosted the show ‘The Talk’, alongside Sara Gilbert, Julie Chen, Sharon Osbourne, and Holly Robinson Peete. After only a few months of being on the show, however, Leah and Holly were kicked off from the show without any explanation or reason whatsoever. In 2013, Leah appeared on ‘Dancing With The Stars’ and placed fifth. She also owns a production company called No Seriously Productions, which is currently making unscripted TV shows and documentaries (under a deal with Critical Content) about organizations similar to the Church of Scientology that physically, mentally, and sexually abuse victims continually.

In 2014, Leah and her husband Angelo Pagan also starred in their own reality series called ‘Leah Remini: It’s All Relative’, which focused on Leah’s home and family life. In 2015, Leah authored the bestselling book ‘Troublemaker: Surviving Hollywood and Scientology’. In 2016, Leah started hosting her TV docu-series ‘Leah Remini: Scientology and the Aftermath‘ which won Primetime Emmy Award for Outstanding Informational Series or Special in 2017. The show ran for 3 seasons, ending in 2019.

As of 2020, Leah Remini’s estimated net worth is around $25 million. Leah owns a 9300 square foot property in Studio City, California, featuring 5 bedrooms and 9 bathrooms. She purchased the property in 2003 for a cool $3.75 million, and now the mansion is valued at approximately $8.5 million.