When Calls the Heart Season 7 Episode 6: Everything We Know 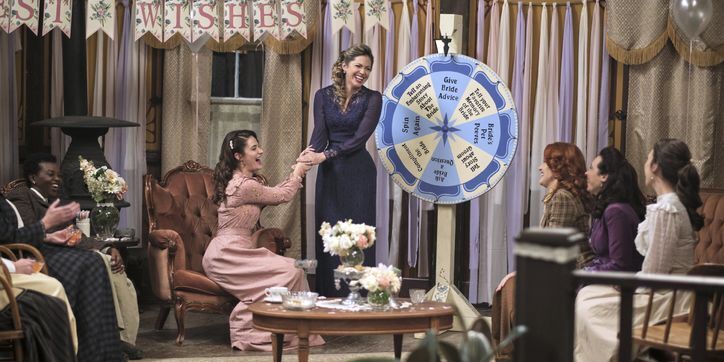 ‘When Calls the Heart’ is a family drama that puts the spotlight on the life of Elizabeth Thatcher, a kindhearted teacher, who has left her luxurious city lifestyle behind to pursue a peaceful frontier life in the coal-mining town, Hope Valley. Upon reaching, she connects with some like-minded people and finds a new job that satisfies her soul. The show is based on the Janette Oke’s eponymous novel and is developed for the screen by Michael Landon Jr.

Season 7 released on Hallmark on February 23, 2020. The season centers upon Jesse and Clara’s highly anticipated wedding. It also revolves around the complicated love triangle between Elizabeth and her two suitors – the sharp-witted businessman, Lucas Bouchard; and the charming and sweet Mountie, Nathan Grant.

Hallmark released the episode 5 on March 22, 2020. In the episode, Rosemary and Lee throw a joint party for Jesse and Clara’s upcoming wedding, and all the young men and women have a great time. Also, the town solves the mystery of the unexpected gift, someone gets for Elizabeth. Check out the recap for more. In case you are wondering about the details of ‘When Calls the Heart’ season 7 episode 6, keep reading!

The upcoming episode has been titled ‘In Perfect Unity.’

The episode might begin with the ending of the previous episode. Right after Lucas leaves Elizabeth’s doorstep, Nathan might arrive with a bunch of flowers for the woman he admires, putting Elizabeth in a fix. What is up with Lucas and Nathan? It seems like they don’t want to but they’re making things difficult for Elizabeth, who is still not wholly open to the idea of entering into another romantic relationship. Her main focus right now is her baby, and the guys need to respect that. If one of them does show the level of understanding Elizabeth is looking for, it will be easier for her to choose between the two. Elsewhere, we might see the whole town working together under Elizabeth’s leadership to make sure Clara and Jesse get the wedding they have been dreaming about since day one.

You can check out the promo of Episode 6 below:

Where to Watch When Calls the Heart Season 7 Episode 6 Online?

If you don’t have a cable subscription, you can stream the show on Sling TV, Philo TV, Fubo TV, and DirecTV. Another way you can watch the show is by purchasing the episodes on Amazon Prime. Some of the previous seasons of the show are also available on Netflix.

When Calls the Heart Season 7 Episode 5 is titled ‘An Unexpected Gift.’

The main focus of the episode is finding the identity of Elizabeth’s secret admirer, who has dropped a bouquet at her door. Bill begins investigating the matter and narrow down the list of possible suspects to two people – Lucas and Nathan, who deny doing the same.

Meanwhile, Rosemary plans a bachelorette party for Clara, booking half of Lucas’ saloon, while Lee books the other half for a party he is organizing for Jesse. The men get invested in the fun the ladies are having. Therefore, Rosemary clubs both the parties together. After a lot of fun and games involving both Clara and Jesse’s friends, the event turns out to be successful. On their way back, Rosemary tells Elizabeth, “Your heart is open again, isn’t? And now it’s being pulled in two directions.” Elizabeth denies, saying she is still thinking about the flowers. Rosemary then admits to leaving the flowers at Elizabeth’s door, to lift her spirits up.

Elsewhere, Fiona goes to Benson Hills for some work in Henry’s car, which breaks down midway. Fiona takes the car to Kevin’s shop, but he is unable to fix it. Upon finding the truth, Henry apologizes to Fiona for forgetting to inform her about the existing issue with his car. He fixes the car by himself. The episode ends with Lucas arriving at Elizabeth’s door with flowers, and on his way back, he spots Nathan with a bouquet, heading towards Elizabeth’s place.