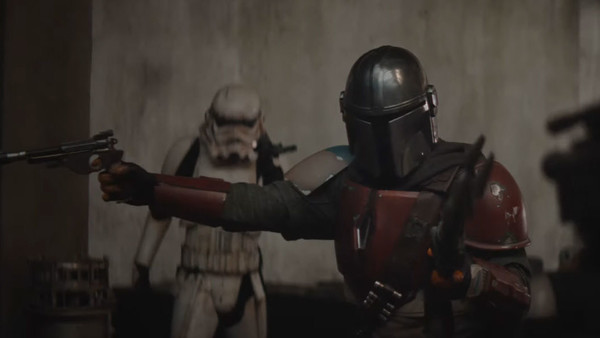 ‘Star Wars‘ is an expansive franchise and has had our complete attention from the time it came into being. That being said, with so many entries, it might be difficult for some of the newer fans to keep track of the timeline of events, as they unfold in a galaxy far far away. With Disney+‘s latest show, ‘The Mandalorian’, more of Star Wars lore is coming to the forefront, but you would be right in getting confused about when the tale is set.

After all, we have seen some feared Mandalorians in the movies, like Boba and Jango Fett. However, the titular character of the show seems to be different from them in terms of ruthlessness, though he is just as lethally effective. The complicated bounty hunter’s profession is made more difficult by the enormous reveal at the end of the pilot episode, which promises to change the ‘Star Wars’ universe forever. Spoilers ahead, as we explain the timeline of ‘The Mandalorian’ and how it accounts for the events as they unravel in the show.

When Does ‘The Mandalorian’ Take Place?

We know for a fact that ‘The Mandalorian’ is set five years after Luke Skywalker and the Rebels have successfully toppled the Empire in ‘Return of the Jedi’. This is evident because the Mandalorian refuses to take Imperial Credits as payment, opting to settle for half the price in a more stable currency. Notably, the Imperial Credits are also subject to fluctuation. Moreover, the New Republic has been formed by the time ‘The Mandalorian’ takes place, but it is not far-reaching. In absence of authority of both the New Empire and the Republic in the fringes of the galaxy, lawlessness abounds.

While the Empire is toppled before the adventures of the Mandalorian, evil is never completely quashed. Dave Filoni, who directed the first episode of the show has mentioned how the universe does not turn good just because some Death Stars have been destroyed. The Rebels have won and are trying to form a Republic, but the Empire seems to have gone on the defensive. This is well documented in novels like ‘Aftermath’ and ‘Alphabet Squadron’, besides videogames like ‘Battlefront 2’. Since we know that the Empire was followed by The First Order, which we see in ‘Star Wars: The Force Awakens’, the 2015 movie, it is likely that the new evil will rear its head in ‘The Mandalorian’.

The show is set before the 2015 film and showrunner Jon Favreau has even teased that his series could contain the seeds that explain the origins of The First Order. By the time we see it in the movies, The First Order is well on its way and has consolidated some power. The unexplained history might be explored in the timeline of the ‘The Mandalorian’.

We do happen to know a bit from ‘Bloodline’ that traces how members of the Empire fled to the Outer Rim to avoid being forced to surrender. Eventually, there they formed The First Order. Since the Mandalorian operates in these areas, we could very well see him navigating a world where a new evil force is making its presence known. However, there are about 20 years of history that the series has to explore if we are to know the story of The First Order completely.

This would have effectively wrapped up anything needed to know about the timeline of ‘The Mandalorian’ if not for the wrinkle thrown in at the end of the pilot episode, in the form of baby Yoda. A lot of people began to think that maybe this series is a distant prequel to the movies. Unfortunately, that is not the case. Yoda, as we know, lived and died a long time before the events of the show. In fact, the master Jedi gave his life in ‘Return of the Jedi’. The fifty-year-old baby that the Mandalorian tracks, is another member of Yoda’s species. However, we know that Yoda was probably the last surviving member of his race, and we know almost nothing about his past.

‘The Mandalorian’ could change all that as it continues the timeline after Yoda’s death. It remains unknown whether the baby was Yoda’s, but you should know that there is a mention of a female from Yoda’s species, called Yaddle, who appears in ‘The Phantom Menace’, as a member of the Jedi High Council. Going by the baby’s age, the baby Yoda could have been born around the time the Clone Wars began, meaning it could actually be a Yoda clone. It remains to be seen how ‘The Mandalorian’ explains the baby Yoda wrinkle, but the timeline places it after ‘Return of the Jedi’ and before ‘The Force Awakens’.

To get a better idea of the entire ‘Star Wars’ timeline, and where ‘The Mandalorian’ fits, check out this simple list: