Where is Christina Hildreth Now?

Investigation Discovery aims to shed light on some of the most prolific and gut-wrenching crimes, and criminals, that have swept the nation in ‘Evil Lives Here.’ One such serial killer, Shawn Grate, is also discussed in the series. He was convicted for murdering 5 women, but as is the case with serial killers, the real count could potentially be more. A woman from his past, Christina Hildreth, has also said that she could have just as easily been one of his victims.

Who is Christina Hildreth?

Christina is the incriminated serial killer’s ex-girlfriend. She met Grate in 2005 through her step-sister, and the couple was together for 5 years. She described him as an emotionally abusive person. When asked by Ashleigh Banfield (former HLN anchor and journalist) if she was surprised by the murder confessions he had made, Christina said no.

Initially, the relationship was perfectly fine. Christina even stated that Grate was charming and handsome back then. It was only when the two decided to move in together that the abuse seeped in, and his possessive and manipulative side came forth. She claimed that he would not let her use her phone, go to work, or even stare out of the windows of her own house.

The details of the abuse that occurred in the relationship are truly horrifying. Christina explained that Grate’s personality would switch at the drop of a hat, and no one could predict when it would happen. After learning of his murder spree, she felt that she could have just as easily been one of those girls, considering how toxic and volatile their relationship was.

It was a fateful day in June 2010 that Christina was finally able to break free from the relationship, but even that came at the cost of a broken hand. They were living at Woodbine Apartments in Bucyrus. Grate was responsible for the upkeep of the residence (since she brought home the bacon) but had failed to do so. Christina stated, “We argued before I went to work one morning about it and when I got home, he had straightened up the house a little bit but had not done most of it. He wanted money and I refused to give him any and I told him he needed to get out.” She said that in the ensuing altercation, Grate broke her hand.

Christina was able to convince her assaulter to take her to the hospital but was only able to tell the nurses and hospital staff the reality after Grate briefly stepped out of the room. The police arrived, but he had already left by that time. She said that while the authorities were looking for him, he was hiding in her apartment for a week under her sofa and that she had no idea he was there. She stated, “You think you’re safe in your own home and you’re not.”

The victim of abuse noticed a few signs that made it seem as though someone was in the house, including the food not being in the right place and the toilet seat being left up. Grate threatened her even when the police were at the door. When she responded to them, he stood behind Christina with a hammer and said that if she revealed that Grate was there, he would hit her in the head with that very hammer.

It was only after this incident that he was eventually arrested and served a 180 days sentence. The last three years of that relationship were a living hell for her, and she consistently feared for her life. She even said that she warned her family— “Multiple times, I told my mother, you gotta help me get out. Or something is gonna happen.” After being released from jail, Grate apparently even tracked down a friend of Christina’s. He asked the person for information on Christina’s whereabouts, but her friend refused to divulge that information.

Where is Christina Hildreth Today? 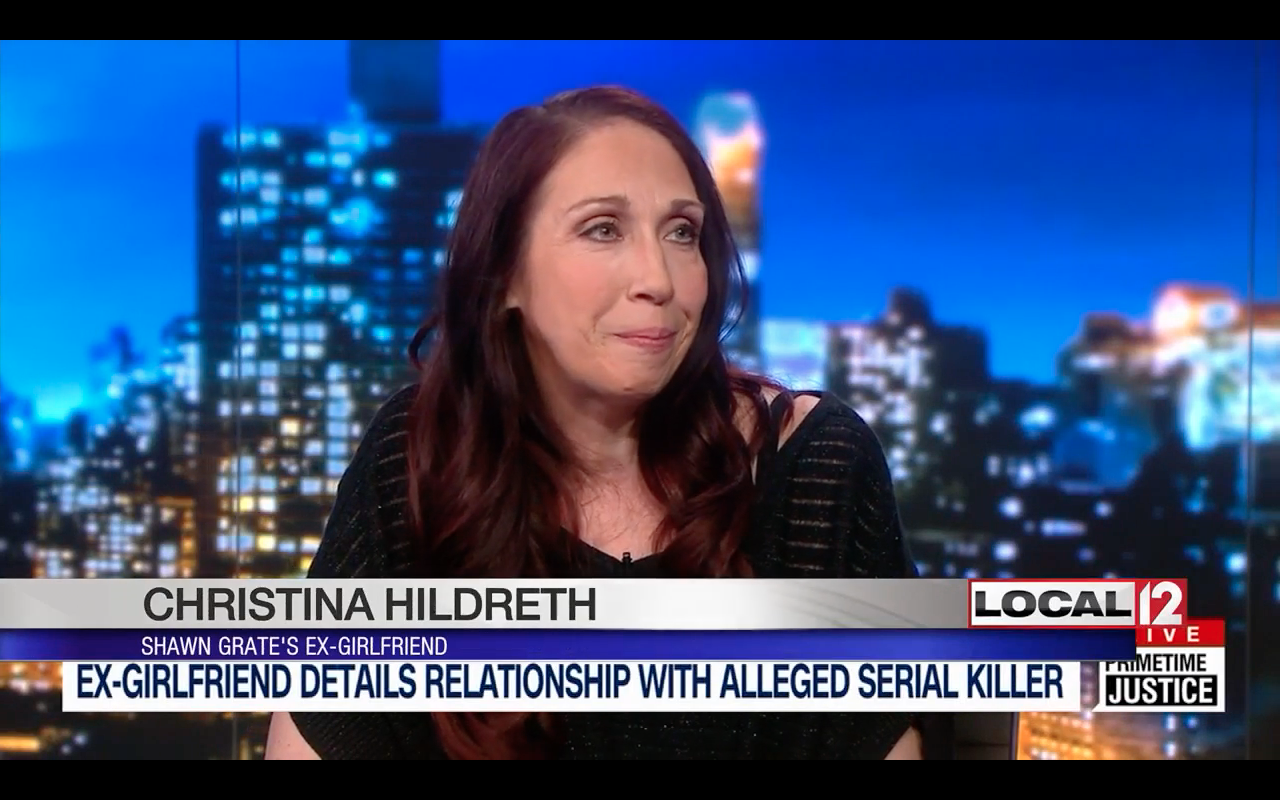 Christina Hildreth said that she was creeped out when she found out about what her ex had done. When asked by Ashleigh Banfield (former HLN anchor and journalist) if she was surprised by the murder confessions he had made, Christina said no. She also cooperated with the authorities during their investigation and told them that the car they were interested in was impounded back in 2007 for false license plates. In 2016, she appeared on The Dr. Oz Show to talk about her relationship. However, her current whereabouts are unknown due to the absence of any verifiable sources.