Where is David Tronnes’ Ex-Wife Now?

CBS’ investigative newsmagazine, ’48 Hours,’ tackles the 2018 murder of businesswoman Shanti Cooper in her Florida home. Authorities suspected that the husband, David Tronnes, was responsible for the crime. In fact, they also felt that there were many similarities between the conditions of his ex-wife and Shanti, and also explored a potential poisoning angle. This article explores why the police may have felt so and it also sheds some light on David’s previous relationship.

Who is David Tronnes’ Ex-Wife?

Carole Tronnes is David Tronnes’ first wife, and the pair tied the knot in April 1999. David and Carole met each other through a blind date set up in 1997, and she described her ex-husband as attractive and smart. She also felt that the relationship started on the right note and said, “It was healthy. It was loving. It was a growing relationship. We did a lot together.” The couple was married for 14 years and resided in Minnesota.

The mutual friends of the former couple, however, had a different point of view. They felt that Carole had become more secluded.  When Orlando Police Detective Teresa Sprague and Assistant State Attorney Ryan Vescio flew down to Minnesota to interview Carole for Shanti Cooper’s case, they brought up this topic too. According to a recording released by Orange Osceola State Attorney’s Office, Detective Sprague said, “Your friends have described you back [before the marriage] as vibrant, a little shy, fun, always active … and that all changed when you got married to David Tronnes. … You quit [your job] pretty quickly, you moved away pretty quickly, you stopped communicating with them pretty quickly within that first year.” However, Carole just attributed this to her health issues.

You see, soon after Carole and David got married, the former’s health started deteriorating. Nausea and near fainting spells were commonplace, and particular foods or alcohol only contributed to her sickness. In an attempt to control the symptoms, she started following a strict diet. Officials alleged that Shanti also suffered from similar problems. According to the report written by the detective, two months before her death, the businesswoman was admitted to the hospital for three days because of a burst appendix. Moreover, she could not ingest spicy food or alcohol and she had also lost weight. 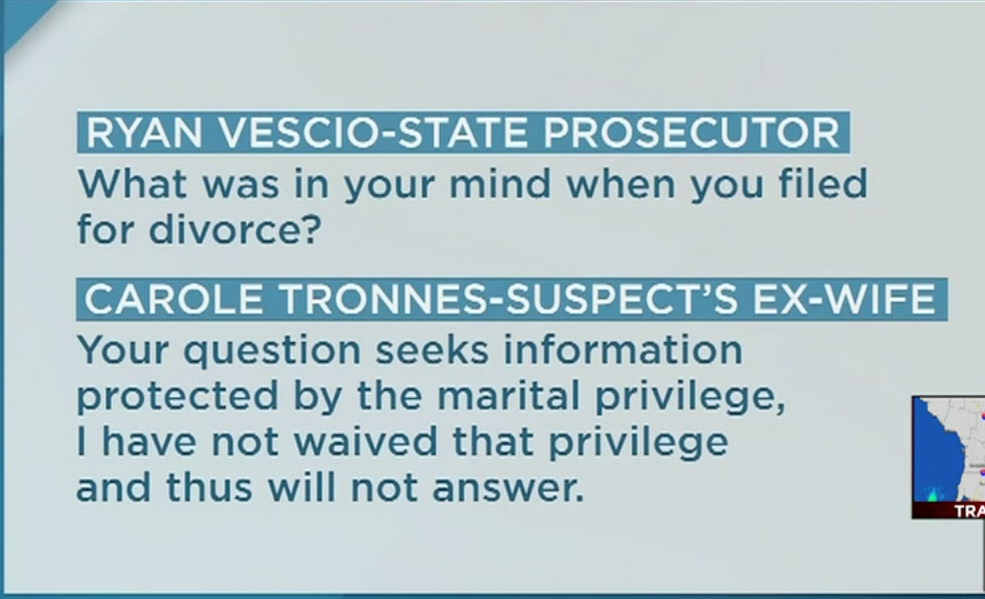 Thus, officials felt that it was possible that David had been poisoning both women during the marriage. However, Carole denied these claims stating that her health problems continued even after David and she divorced. Furthermore, she claimed that her ex-husband was simply stubborn, not controlling. The couple divorced in 2013, and when asked about the reason, Carole invoked the spousal privilege. This ensures that private conversations between spouses remain private. Dan Scott, her attorney, also stated that his client did not want her personal life to become public information. We do, however, know that the split was amicable.

Where is Carole Tronnes Now?

As of 2019, which is when the aforementioned interview was conducted, Carole Tronnes was living in Minnesota. There is no reason to suspect that this has changed. Carole told the detective that she spoke to her ex-husband occasionally even after their separation. She had also called him to offer her condolences when she found about Shanti’s demise. Carole has maintained that she does not think that David is culpable for the homicide.

Weeks before her ex-husband was arrested, Carole had been communicating with him more regularly. In fact, the pair even had a joint account which housed close to half a million dollars. When asked about this, she simply stated that she had forgotten to remove her name from the account, but she had not spent any money from it. Furthermore, Carole also revealed that one of David’s attorneys asked her to own a 1% stake in an LLC her ex-husband had set up Shanti’s death. When authorities asked why her why David would have selected her for this, the ex-wife stated, “I suspect he’s looking for somebody he trusts.” Carole thought that the LLC had to do with David’s estate planning.