Where is Pope Benedict XVI Now? 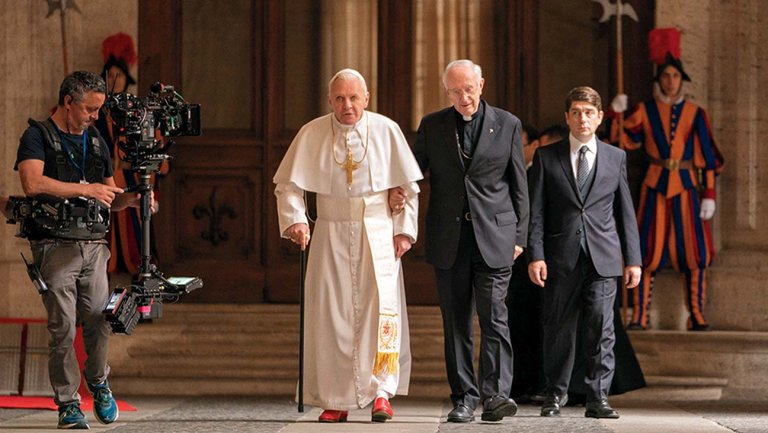 It is a herculean feat to find a universal audience for a movie about religion or religious figures. These are such sensitive and subjective topics that they need to be treated delicately, with a sense of honesty. But ‘The Two Popes‘, directed by Fernando Meirelles of ‘City of God’ fame, manages to achieve this, and achieves it with such grace. The film has the power to enthrall its viewers irrespective of their religious inclinations and make them feel and connect as it tells a very human story about faith, and how two very different men come together because of it.

‘The Two Popes’ is written by Anthony McCarten of ‘Bohemian Rhapsody‘ and ‘‘The Darkest Hour‘ fame, and is a film adaptation of his own play, titled, ‘The Pope’. The film’s beauty lies in the way it humanizes papacy and the two most important religious figure for the Catholic Church, and does it with a sense of humour and realism. It centres around a series of imaginary (but very real) conversations between Pope Benedict, played by Anthony Hopkins, and Cardinal Bergoglio (before he became Pope Francis), played by Jonathan Pryce, in 2012, as Pope Benedict takes the decision to resign.

McCarten conceived the concept for the screenplay on his visit to Vatican City when he attended a mass by Pope Francis. It made him wonder how the liberal Pope ended up being where he is today, and what made the ultra-conservative Pope Benedict take such an unconventional decision. In an interview with the Hollywood Reporter he stated:

“It occurred to me in that moment,” says McCarten, “to ask: What had made the most traditional pope of the modern era do the most untraditional thing possible and resign?”

It was his explorations on the subject that made him create ‘The Two Popes‘, a fictional account of two very real men who share their faith, coming together to find a common ground for the future of the Catholic Church, despite their personal and ideological differences. But why did Pope Benedict actually resign and where is he now? Here’s everything we know.

Why Did Pope Benedict XVI Resign? 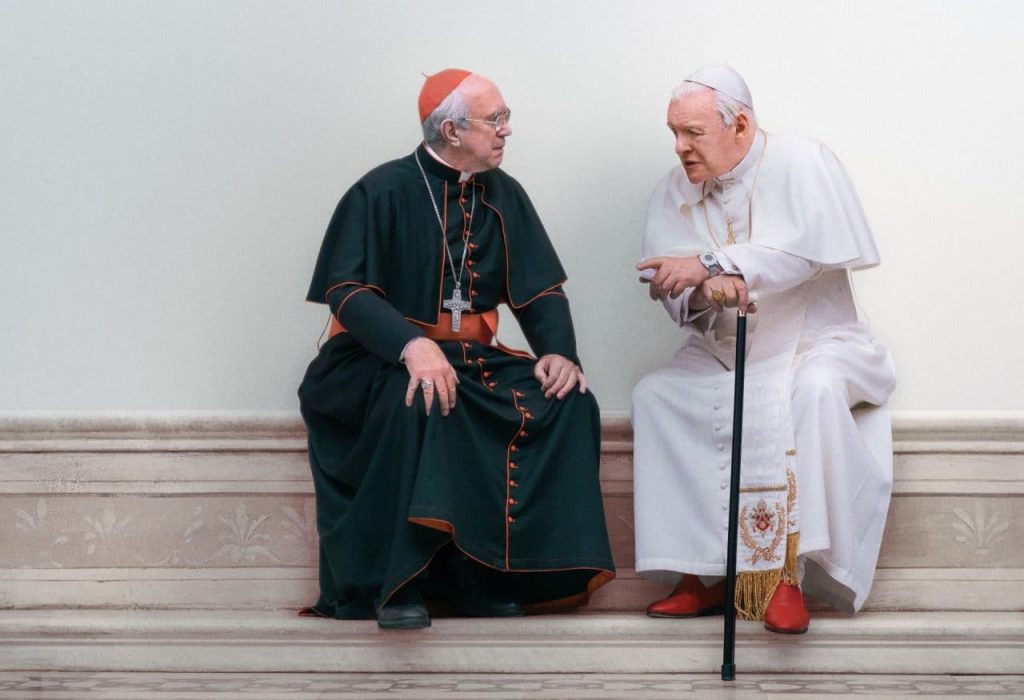 Pope Benedict XVI shocked the world on February 2013, when he declared his intention to resign from his post as the pontiff of the Catholic Church. The move was never seen before in centuries as no other Pope before him had resigned in over 600 years. The tradition is to resume papacy until the pontiff’s death. But what made Pope Benedict take this unconventional shocking decision?

Pope Benedict was born as Joseph Aloisius Ratzinger, and had long career as a professor of theology before he was appointed Archbishop of Munich and Freising. He then served as the head of the Catholic Church and sovereign of the Vatican City State from 2005 until his resignation in 2013, at the age of 85. Benedict cited his advanced age and deteriorating health as the primary reason for his resignation. He believed that he was physically and mentally not at his best state to lead the church, explaining that his condition made him “recognize my incapacity to adequately fulfill the ministry entrusted to me.”

But Pope Benedict’s tenure had also been a controversial one, and revealed the Church’s difficulties in adapting to the changes in the world and raised questions on papal infallibility. Thus, it is believed that there were other factors involved in his decision as well.

Benedict got involved in the infamous sexual abuse scandal that had preceded his tenure. He began handling and investigating allegations of sexual abuse against people from the Church. Benedict ended the service of Marcial Maciel Degollado, an influential Mexican priest with a long trail of accusations. He also became the first pope to meet the sexual abuse victims in 2008 and tried to make amends.

The New Yorker stated that the Church unfrocked over 380 offending priests around 2011. But the crisis was much bigger and required more than just the efforts of Benedict. It is also believed that these incidents made him question his faith in the Church.  Along with these, there was the Vatileaks scandal where the pope’s documents were stolen and leaked. There was also the financial crisis with the Vatican Bank, another issue that he got involved in even though it had preceded his tenure. It is believed that these issues threatened the infallibility of the Church and became too much for Benedict to handle, especially at his age.

But Pope Benedict has stuck to his original explanation for his legacy-altering move,  stating that he could no longer publicly lead the 1.2 billion Catholics especially in the current times of great changes. Instead he proposed for a new Pope to be elected who could take charge and lead the public in the times of change. Thus, Pope Francis became his successor and elected at the pontiff in March 2013.

Where is Pope Benedict XVI Now? 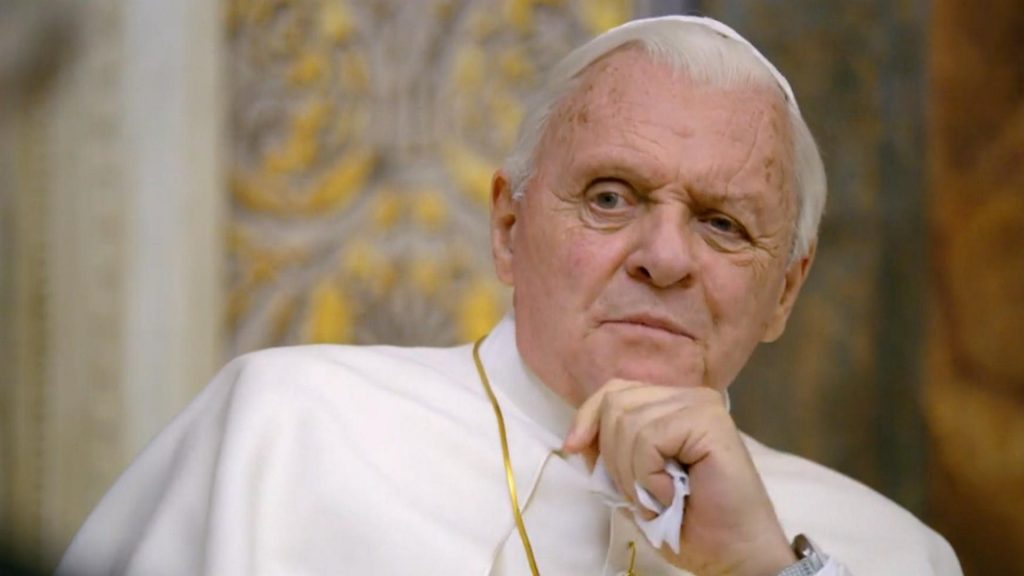 Pope Benedict still lives in the Vatican even after his resignation. He initially took up residence in the Papal Palace of Castel Gandolfo, which was also his summer home during his tenure. Benedict then moved permanently to Vatican City’s Mater Ecclesiae on May, 2013. Mater Ecclesiae translates to “Mother of the Church” and was created by Pope John Paul II as a monastery for cloistered nuns, and later became the residence for the pope emeritus.

After his resignation, Benedict chose to be known by the title of “pope emeritus” and continued to wear his distinctive white cassock, but without the red papal shoes and the mozzetta. His resignation also led to the destruction of his Ring of Fisherman, something that only happens once the Pope passes away. But due to the unusual circumstances of Benedict’s resignation it had to take place.

Pope Benedict’s resignation led to a unique situation at the Vatican that has never been seen before, as both Benedict and Pope Francis grace the grounds of the Church, and the former Pope makes occasional public appearances with Francis. This becomes interesting as the two popes continue to share an unlikely bond where they do not see eye to eye on a lot of matters. Francis’ relatively liberal views are a stark contrast to Benedict’s more traditional views. But perhaps it was Francis who was required for the changing times.

Benedict occasionally meets Francis, who calls the pope emeritus a “wise grandfather” who watches his back. But in April 2019, another controversy broke out between the two as Benedict finally broke his silence about the ongoing clerical sexual abuse scandal with a 6,000 word letter where he blamed the moral collapse within the church, and the sexual revolution of the 1960s. This became controversial as it went against Francis’ views who directly blamed the priests for exploiting their power.

Pope Emeritus Benedict XVI spends most of his days writing and praying in solitude of the Vatican’s Mater Ecclesiae. He believes that his choice of resignation was his duty for the greater good of his people. He has resumed his private life, and he occasionally receives visitors at his residence in the Vatican gardens. He loves playing the piano, as was shown in ‘The Two Popes’, and he works on his Mozart during his spare time. He also reads the Vatican’s daily newspaper, enjoys gardening and has a vegetable patch that he tends.

What makes McCarten’s ‘The Two Popes’ so remarkable is the way it portrays the differences between the two popes in a realistic and sensitive manner. This is deeply relevant to the reality of our times as people continue to lose their faith in religion. The film allows us to connect to the two most important religious figures in the Catholic Church, to understand their views on faith, and it does this in not just a realistic way, but in a touching manner as well. It becomes greatly significant as the film allows for a much-needed dialogue between the two sides of the Catholic Church, between its traditional and liberal views for Church’s own progress and future as it also needs to change with the changing times.