Where is Robert Lee Yates Now?

Investigation Discovery, with the help of their show ‘The Spokane Serial Killer: An American Monster,’ takes a peek at the lives of Robert Lee Yates who, at first glance, may as well be your neighbor. His facades and damning secrets are brought to life through meticulous investigations and interviews. In the show, the audience is made privy to someone who was pretty much living a double life.

Who is Robert Lee Yates?

Robert Lee Yates Jr. was born on May 27, 1952, and grew up in a middle-class family in Oak Harbor, Washington. In 1970, he graduated from Oak Harbor High School. He then married his first wife, Shirley Nylander when he was 20 years old. He also enrolled in pre-med at the Walla Walla College. They got divorced two years later, and he then worked at the Washington State Penitentiary as a corrections officer in 1975 for a few months. He also tied the knot with his second wife, Linda, a few months later.

It seemed as though Robert could not hold a job outside the military. So, by 1977, he had enrolled in the US Army and was certified to fly some civilian transport planes and helicopters. He was posted internationally as well, and some of the countries he went to were Germany, and eventually, Haiti and Somalia for UN peacekeeping missions.

After 19 years in service, Robert retired with a stellar career graph in April 1996. He had received many accolades and service medals including the US Army Master Aviator Badge. The military, at that time, was diminishing its numbers, and so Robert was granted an early retirement with full pension and benefits. This was clearly not an ordinary situation, and if the Army was not downsizing, Yates would have had to serve another year and a half before being eligible for full retirement with benefits.

Robert and Linda went on to have five children— one son and four daughters. The family settled in Spokane. It seemed as though he was an almost perfect embodiment of the good ole’ fashioned American spirit— a patriot who served his country, a married man, and a doting father who enjoyed hunting and fishing. He was anything but atypical.

Well, this stark reputation was replaced with the moniker of a serial killer by April 2000. The truth was that Yates carried out horrific murders between 1975 and 1998. Almost all of these crimes involved sex workers on Spokane’s East Sprague Avenue, who died due to gunshot wounds to the head. His process was that after approaching them, (in many cases) he would have sex with them. Then, sometimes, they did drugs together, after which he killed them and disposed of their bodies.

Christine Smith was a sex worker who survived a murder attempt at Yates’s hands and had also been robbed by him. This happened in 1998, and she was 32 years old at the time. She went straight to the police and gave them a description of her assaulter. Meanwhile, in September of that year, the police asked Yates for a DNA sample, which he refused to give because it was an insinuating and extreme request from a family man.

On April 18, 2000, Yates was arrested for the murder of Jennifer Joseph. His white Corvette had been searched, and police found blood that linked him to Jennifer’s murder. They found DNA evidence matching 12 other victims as well. There was even the body of Melody Murfin which had been buried in his own front yard. His luck had started to run out. You see, Yates had previously been stopped by the Task Force when they were searching for a white Corvette (in which a few victims had been seen), but the field report was misread. They thought they were actually seeking a white Camaro and let him go.

Where is Robert Lee Yates Today?

For the appalling killing spree, Yates was charged with 13 counts of first-degree murders and one count of attempted murder at Spokane County Superior Court. He pleaded guilty for his crimes as part of a plea bargain so as to not receive the death penalty. He apologized to the family members of his victims as well. He received a sentence of 408 years behind bars. 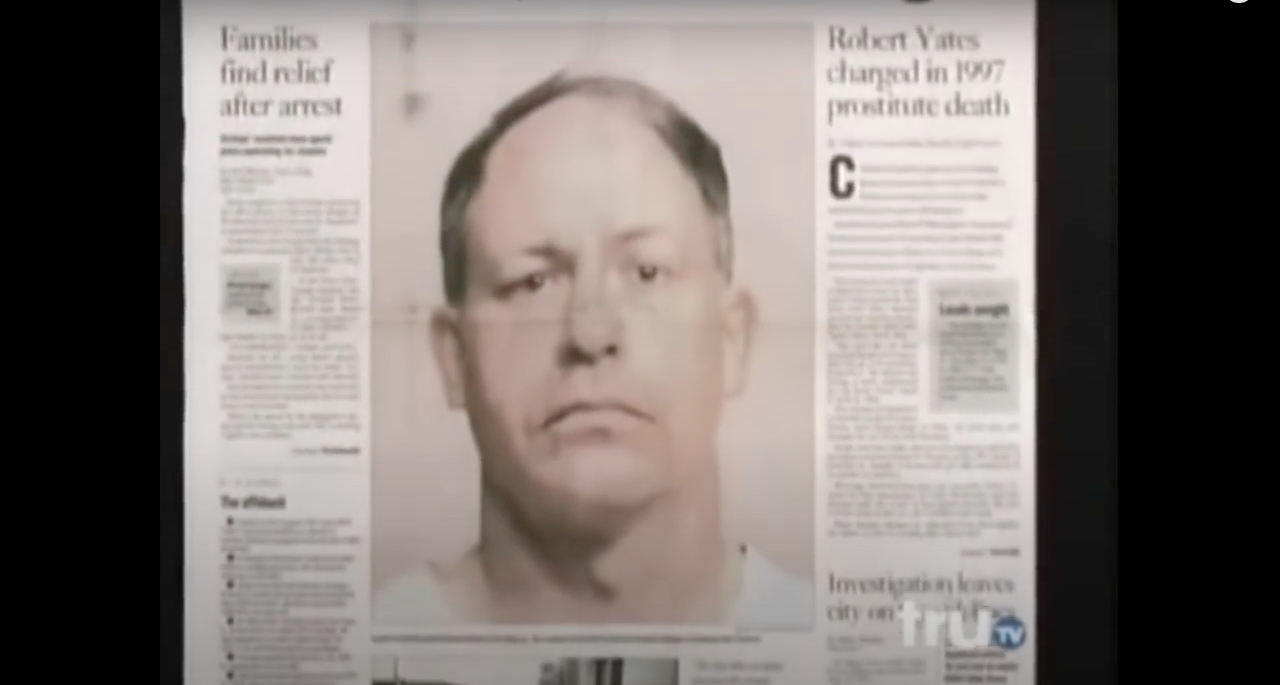 However, the story did not end here. While he was already incarcerated, Yates was also charged with two more crimes— the murders of Melinda L. Mercer (in 1997) and Connie Ellis (in 1998). He was found guilty and was given the death penalty. He was to die by lethal injection on October 3, 2002. But Yates viewed his previous sentence as an all-encompassing one and appealed the case. In 2007, the Washington Supreme Court denied the appeal, and even the U.S. Supreme Court refused to review the decision. There was an execution date that had been set for September 19, 2008, but it was stayed due to additional appeal requests.

The veteran’s legal team, in 2013, filed a habeas corpus petition claiming that Yates was mentally ill, and suffered from a severe paraphilic disorder, which contributed to his killing spree. However, Pierce County Prosecutor Mark Lindquist, said, “I don’t think Mr. Yates helps his cause by relying on the fact that he’s a necrophiliac.”

Jay Inslee, the Governor of Washington, stated that he would not sign any death warrants for convicts who had been given the death penalty. The politician asserted that there was no conclusive evidence to show that the penalty actually worked. In July 2015, the Washington Supreme Court refused to change Yates’s sentence. However, in 2018, it was declared that the death penalty was unconstitutional in the state, and Yates, who was once on death row, is now serving life in prison without the possibility of parole at the Washington State Penitentiary.