Where Is Selling Sunset Filmed?

Netflix’s ‘Selling Sunset’ became a hit soon after it first premiered in March of 2019, not just because of its grand production, its peppy soundtracks, and the glamorous lifestyle of the cast members, but also because of all the interpersonal drama between them. Of course, to add to that perfection, the multi-million dollar mansions that they are trying to sell are also included. Imagine ‘Real Housewives of Beverley Hills‘ and sprinkle a bit of ‘Million Dollar Listings‘ on top, and you’ll end up with ‘Selling Sunset.’

This series is the streaming network’s very first English-language docu-soap, and it chronicles the personal and professional lives of the fierce yet sophisticated female real estate agents who work for The Oppenheim Group. As we watch them try to find a balance between every aspect of their lives, they let us into their luxurious world and show us some of the most incredible places in California.

A majority of ‘Selling Sunset’ takes place in some of the most stunning locations in Los Angeles, California. A number of areas within the city and the west coast get the top priority because, as we mentioned, the factor that got our attention the most – apart from the ongoing drama among the cast members – is the picturesque setting and the production of the show, which is high-end through and through. So, here are all the places featured in the series. Make sure to add them to your bucket list if you’re ever planning on visiting LA. 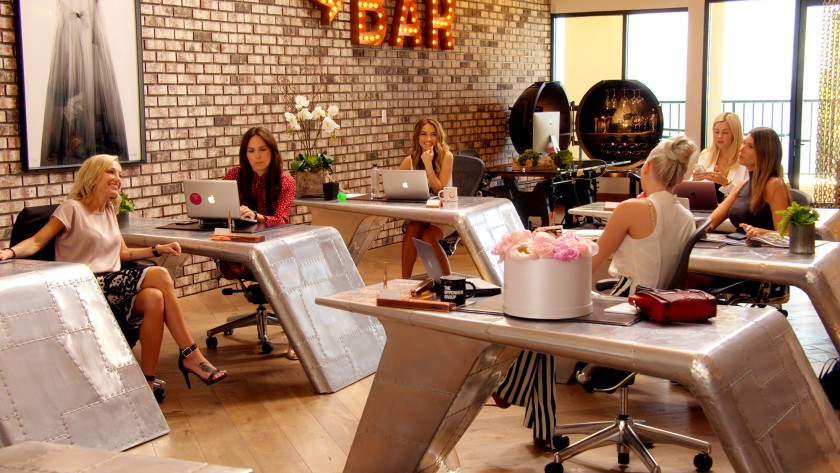 First things first, let’s start with The Oppenheim Group office. After all, this is where a majority of filming is done, including the one-on-one cast interviews. The office is at a prime location within LA, set perfectly on the corner of Sunset Boulevard and Sunset Plaza Drive. Having an open-plan architecture and being glass-fronted, you can stroll by and even take a peek inside to look at all the cast members on their desks, hard at work. The people, the couches, the bar, and the coffee cart can all be seen right from the outside.

Next, let’s talk about some of the restaurants that we’ve seen. The Farmhouse in Beverly Hills’ Beverly Center is very LA, and that’s a place that everybody needs to visit (especially if you and your team are celebrating a 25% rise in profits). Apart from that, some of the other restaurants which the cast members visited to have a good time and catch up or to just gossip were ChitChat cafe, Le Petit Four, and The Henry. Of course, we can’t forget Pour Vous (the location of Mary’s bachelorette party) and EB Florals (the location of Christine’s engagement party).

Speaking of engagements and weddings- while Mary got her wedding dress from an adorable luxury bridal boutique named Floravere at Melrose Place, Christine got her couture dress from Galia Lahav at La Brea Avenue. The venue of their respective weddings was a lavish private residence in Los Angeles (which Mary sold on her wedding day) and an elegant cathedral in downtown Los Angeles.

Although this filming location wasn’t as glamorous, for obvious reasons surrounding the circumstances, St. Louis was also a part of the production area. We got a glimpse of the city as the camera crew followed Chrishell as she regrouped with her family to try to make sense of what was happening and to get back on her feet after her divorce. And, if you want to visit Shonda, Chrishell’s sister, to avail her esthetician services, you can find her at Skinspa at Olive Boulevard, Creve Coeur, St. Louis.