Where is Stephanie Dietrich Now?

Investigation Discovery takes a detailed look at the murders that were perpetrated by Manuel Gehring in ‘Evil Lives Here: I Don’t Believe in Forgiveness.’ The 44-year-old father had shot his own children, 14-year-old Sarah and 11-year-old Philip after the 4th of July fireworks in New Hampshire in 2003. He then drove across the country with their bodies in his car to the Midwest, where he buried them. The exact location was unknown for two years after the crime. Despite the mother, Teri Knight, putting all her might in the search effort, it would ultimately be a very kind-hearted and dedicated stranger who discovered the bodies of the children.

Who is Stephanie Dietrich?

Stephanie Dietrich is the woman responsible for unearthing the burial site of the children. At the time, she was a 44-year-old grocery store cashier at Acme who lived in Akron, Ohio, 15 miles away from where she would eventually find the corpses. She also had two children, who were in their 20s at the time.

Before Gehring committed suicide in his prison cell while awaiting trial, he had given authorities vague clues as to the burial site. Stephanie said that she read those clues in a transcript and started a search for the location. When she went for walks with her dog Ricco, she would carry along a shovel. She would then dig in potential sites, and after a while, even started obsessing over the task at hand. Then, she would call the FBI with any potential updates.

On December 1, 2005, during one such expedition with Ricco, she found a tree that matched the description that Gehring had given. Her dog also acted strangely, and she dug there to find a black plastic bag with duct tape. She described the Terex Road location: “It’s a dirt road with grass. There was a fence where you couldn’t go much further. Yeah, it was probably six feet tall and it had some kind of pump. Green pump.” She called the authorities, who then took over.

Where is Stephanie Dietrich Today?

The Senior Assistant Attorney General of New Hampshire, Jeff Strelzin, said this about Stephanie and her efforts— “She’s a great person. he’s a mother who obviously was just hit with the story of what happened to Philip and Sarah and really felt in her own heart the appeal she heard from Teri.” 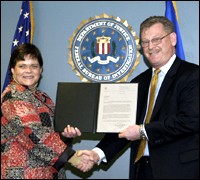 For her contribution to the case, Stephanie was honored by the FBI at their Boston office in 2006. Ken Kaiser, the Special Agent In Charge, gave her a plaque, a cheque for $10,000, and a letter of gratitude from the then-director of the agency, Robert S. Mueller. According to the FBI website, the former director wrote, “Your willingness to voluntarily devote your own time and resources to involve yourself in this very difficult search speaks volumes of your character and compassion. The FBI owes you a debt of gratitude for your diligence and hard work in this matter.” Ricco was also honored at this ceremony, and he was given a special “FBI K-9 Unit” dog collar. Teri and her second husband, James Knight, were also present at the ceremony.