Where is ‘Superstore’ Filmed?

‘Superstore’ is an American sitcom by NBC that is set in perhaps the most commonly visited place in the modern world: the supermarket! Taking a page out of the book of ‘The Office,’ the show is a workplace comedy.

The show revolves around a group of employees working in a large, retail, big-box store which resembles Walmart. In fact, the show takes influence from the retail store chain. The series has been praised for being another, incredibly funny workplace comedy with impeccable casting and pleasant writing.

However, that wasn’t always the case. The first few episodes of the show received largely mixed reviews due to its formulaic writing. But ‘Superstore’ boasts of a talented cast and the series picked up in quality soon, becoming a wholesome sitcom.

The location of ‘Superstore’ has become quite popular with its fans and viewers. It looks like a conventional big-box store but over the years, viewers have become extremely familiar with its many aisles and the iconic check-out counter. The store where the show is set in is the fictional Cloud 9 store no. 1217 which is depicted to be located in St. Louis, Missouri. Viewers have noticed similarities between the fictional store and stores like Walmart and Target thanks to its employees’ uniforms, the store’s design and its intercom system. 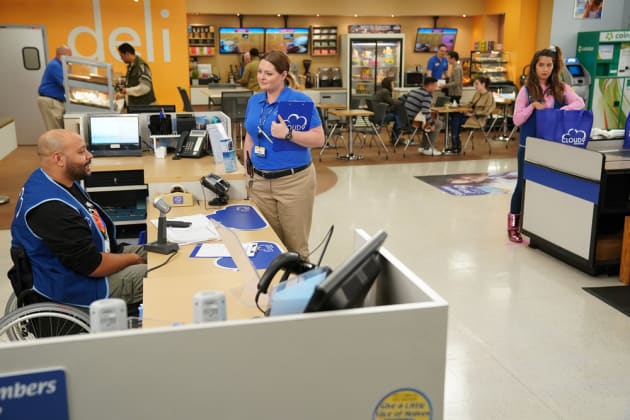 You might be wondering the actual place of filing of ‘Superstore.’ Is it filmed at an actual big-box store? Is that how they make the show look authentic?

No, ‘Superstore’ is not actually filmed at a real big-box store. Well, except the pilot episode and one other, but more on that later.

Currently, ‘Superstore’ is filmed entirely at Universal Studios Hollywood, Los Angeles in California, United States. A three-storey set made to look like a big-box store was built in the production studio just for filming the television series.

Looking forward to first @NBCSuperstore of the season.
w/ a shot from last day of filming. pic.twitter.com/b06yt1TNy1

To make the set look as endlessly massive as a big-box store, the show’s creators employ mirrors which give the illusion that the Cloud 9 store is never-ending. The mirrors are the favorite part about the set for the show’s production designer, Michael G. Gallenberg.

Moreover, several pieces of the set are collected from retail stores that have been shut down. This not only brings the production costs down, but also lends a sense of authenticity. Furthermore, all the rows of shelves known as gondolas are welded with wheels so that they can be moved around in accordance with filming requirements.

Many viewers would be intrigued to know that the pilot of ‘Superstore’ was shot at a real big-box store. The episode was filmed at a Kmart store in Burbank, California. The actress Lauren Ash, who plays Dina on the show expressed her experience while shooting the episode at Kmart:

“We actually shot the pilot of the show in a functional store. During the day, we’d have customers walking around. People would be asking us to help them find things! We also shot in the Universal Studios where a giant store across three floors was built. It was so amazing to be working there. Sometimes you’d just want to go around walking and shopping!”

The store was obviously remodeled a little for the shoot. Its branding and logos were changed to suit the fictional Cloud 9 store. Over the course of 16 days of filming, notices were put up for Kmart customers about the filming since the store continued functioning.

Other than the Kmart store, a Target store has also appeared on the sitcom. It appears on the episode, titled ‘Target’ which is the sixteenth episode of the third season of the sitcom. The episode sees Jeff leaving Cloud 9 to work for Target and Glenn trying to poach employees from the big-box chain in return.

This was a part of Target’s partnership with NBC to increase their brand visibility in inventive manners.

Loving tonight’s episode of @NBCSuperstore? Go behind the scenes to see what went down during filming at our real Burbank, CA, @Target store: https://t.co/hMQP1ua5WD #Superstore pic.twitter.com/kHgULba5Z6