Netflix presents ‘The American Barbecue Showdown,’ a cooking contest where eight of the country’s most formidable backyard barbecuers have to prove their mettle behind the smoker. With diverse contenders, all of whom have different skill levels, it makes for an interesting competition, to say the least. Add to this the many curveballs thrown by the judges, and you’ve got yourself hooked into this meaty and smoky world before you know it. Sylvie, aged 69, may have been the oldest in the competition, but she definitely proved that she was not to be taken lightly.

Hailing from Ramona, California, Sylvie Curry was fierce competition from the get-go. It must be noted that she was the #1 lady pitmaster in the Golden State when the show was filmed. In the first episode, she made a barbecue combo platter that comprised of smoked salmon on a cedar plank. Kevin even felt that they had cooked in the same kitchen after tasting her greens. The next challenge had Sylvie cooking up some cowboy rib-eye tomahawk steak for 50 people! However, the judges were disappointed with the lack of seasoning on the meat. 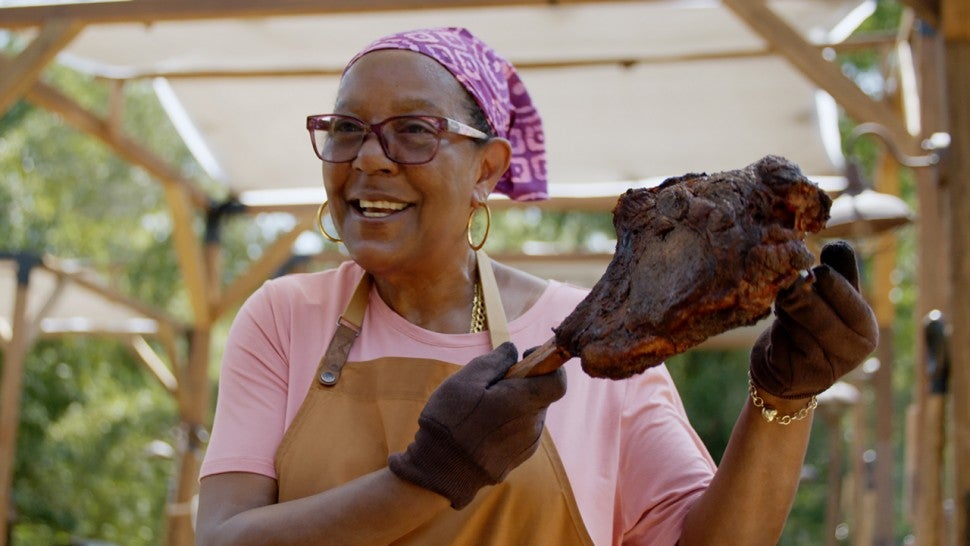 In the third episode, contestants had to make one portion of dry ribs and one portion of wet ribs with a distinct flavor profile. Sylvie had been assigned sour notes by the judges, and she felt confident, saying that she had “a 180 in ribs.” This basically means that in the competition barbecue circuits, she was awarded the perfect score for her preparation of the meat. The pitmaster prepared a Memphis Styled dry beef rib and a Kansas City Style wet pork rib. It seemed as though she had it in the bag, but the ribs were tough and she was one of the bottom two contestants. However, the judges decided to not eliminate anyone, and Sylvie stayed to cook another day.

Sylvie bounced back with a mean short ribs and breakfast sausage sandwich, also winning the challenge. The fifth episode introduced some foreign meats and Sylvie was to cook raccoon and elk. With just six hours to charter the unfamiliar territory, she managed to impress the judges and even won this round. Ashley and Sylvie were paired up to cook up some dishes from the antebellum period, and though they were the losing team, it was Ashley that was eliminated. In the 7th episode, Sylvie was tasked with bringing forth Japanese flavors through her barbecue spread. But her spring rolls disintegrated and even Sylvie felt that her performance could have been much better. Unfortunately, this was the end of the road for the Californian pitmaster, as it was Rasheed and Tina that moved onto the finals.

Where is Sylvie Today?

Well, Sylvie is as committed to barbecue as ever according to her Instagram feed. She constantly uploads a variety of dishes, ranging from a fried pork cutlet to freshly baked bread. She also has a YouTube channel, where she posts some rather different techniques and recipes. The ‘Lady of Q,’ who actually has 15 years of experience when it comes to barbecue competitions, definitely knows her meats. In fact, her social media feed also serves as an archive of the many victories that she has had over the years.

Read More: Where is Tina From The American Barbecue Showdown Now?