Where Was The 24th Filmed? 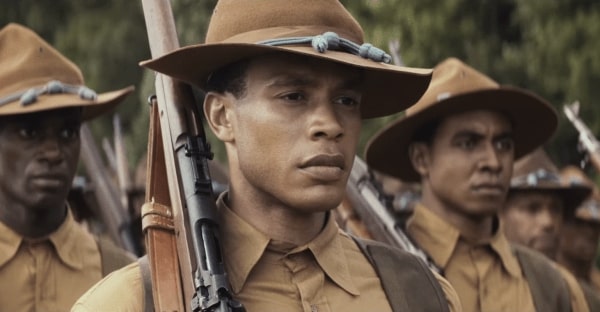 ‘The 24th‘ is an American drama that shines a light on the deadly clash in Houston in 1917. The film chronicles how the constant violence and cruelty of Jim Crow bubbled to the surface and led to an outburst of revenge – which claimed the lives of 15 individuals. The film states how it led to the largest murder trial in US history, with 19 people being sentenced to death. We follow the all-Black Third Battalion of the Twenty Fourth United States Infantry Regiment, who arrive in Houston to guard Camp Logan. However, presently Memorial Park stands in the same location, which might make you wonder where ‘The 24th’ has been filmed. We have got you covered.

Instead of filming in Houston, ‘The 24th’ has actually been filmed in Charlotte, North Carolina. Quite some bits have also been shot in Salisbury. The director, Kevin Willmott, explained the choice, saying that North Carolina has excellent tax incentives, and the filming in Salisbury took place close to the airport, making it easier for the cast and crew to go to other locations.

As the story took place in 1917, the well-preserved historic homes and neighborhoods in Salisbury also fit well. Before we dive into the specifics, here’s a post confirming that scenes have been shot in downtown Salisbury.

A lot of interesting stuff happening with the filming of the 24th in downtown! Something that Salisbury hasn't seen in a while!

The historic Depot appears in some parts of the movie. The crew was amazed at how well preserved it was but ensured that filming didn’t interrupt the operations. The basement and backroom were used as sets. Some portions have been shot near the Brooklyn South Square. There have been some street closures based on where the crews have headed. These include East Council Street from Depot to North Long streets, Bank Street from Main to South Long streets, and South Lee Street from East Horah to East Fisher streets.

Linda McElroy, the city’s communications director, stated that the movie did wonders for the Salisbury economy, bringing in a bit of money. Moreover, it employed locals and residents while bringing recognition to the place. Meanwhile, the location manager for ‘The 24th’ thanked all locals and businesses for welcoming the project with open arms. Here’s yet another post about filming taking place in Salisbury.

Finished filming for the day. The 24th is going to be a unique movie. Trai Byers was nice enough to make it worth Priscilla's and Beth's trip from VA to NC. @ Salisbury, North Carolina https://t.co/HdCOaE3Whm

Apart from that, some parts have been shot in Concord and Georgia as well. You can check out a tweet confirming that the latter was a filming spot for ‘The 24th,’ while a casting call went out for men and women, mentioning Concord as a shooting location.

THE 24TH, a war movie to be directed by Kevin Willmott, is #filming in North Carolina and Georgia in June.

Get all the details at https://t.co/MTal5mR3V0

Thus, it is evident that ‘The 24th’ has made excellent use of various locations to portray a period film. The director believes that if one doesn’t learn from history, one’s doomed to repeat it. ‘The 24th’ uses the setting wonderfully to convey a story that stays with us long after the credits have rolled.