Where is The Good Lost Bird Filmed? 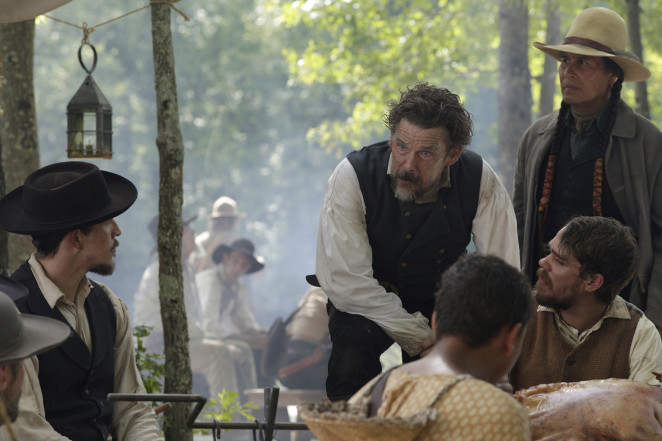 ‘The Good Lost Bird’ is a miniseries based on a National Award-winning book of the same name by James McBride. Ethan Hawke stars as John Brown, a dedicated abolitionist who believes that violence is an unnecessary evil in the fight to eradicate slavery. The story unfolds from the perspective of Onion, a teenage slave who has joined Brown’s motley crew of soldiers, and eventually finds himself at the forefront of the 1859 raid at Harpers Ferry.

The series was filmed in Virginia, but the plot, however, is set in Kansas. Mark Richard, one of the writers, told the Richmond Times-Dispatch that filming was actually supposed to take place in Canada first. But when that fell through, it was to move to North Carolina. Unfortunately, this didn’t work out either. It was Andy Edmunds, from the Virginia Film Office, who asked them to come to the state to shoot since they had all the facilities anyway.

The TV series was shot primarily in and around Richmond. Governor Ralph Northam had announced the filming plans in May of 2019: “The Good Lord Bird will be a fantastic showcase of all that our Commonwealth has to offer. Virginia has emerged as a popular destination for lucrative film and television productions, a hard-earned reflection of our film-friendly atmosphere, talented workers, and unparalleled scenery.” Following this, a casting call was held for extras required on the show by Carol Grant Casting in June 2019.

I'm filming The Good Lord Bird in Virgina right now with Ethan Hawke for Showtime. These men are not forgotten. The women are forgotten. Frederick Douglas was suppossed to be there but bailed at the last minute. #TheMoreYouKnow https://t.co/MWeOO3vcUI

Ethan Hawke felt that he learned a lot more about the history of the Civil War by just being present in the state. He continued, “It was enlightening to drive by all the Civil War monuments [on Monument Avenue, now mostly removed] on the way to set. You could feel the history on every street of Richmond. I appreciated and learned from the many wonderful local museums, many of which explore the history of slavery. I am particularly grateful for Christy S. Coleman, [formerly] from the American Civil War Museum, for spending so much time with us, sharing her knowledge of day-to-day life of that time period, and the horrors that way too many Americans experienced.”

The Kansas set was actually situated in Powhatan, which is a 40-minute drive from Richmond. The neighborhoods of Belle Isle, Three Lakes Park, and Church Hill in Henrico County were also used for filming. In one scene, Onion has a less than fortunate encounter with Frederick Douglass. This scene was shot in Church Hill, and it actually replaced the city of Rochester, New York. A tweet also mentions that Libby Hill Park was used for filming.

Furthermore, the Three Lakes Park also features in the list for filming venues, and its exact address is 400 Sausiluta Drive, Richmond. Another site that filmmakers used was the Bolling Haxall House, which is situated at 211 E. Franklin Street, Richmond. Apart from this, Rockett’s Landing in Richmond and various localities in Petersburg can also be seen in some scenes. The Oscar-nominated actor felt much appreciation for the people of the city— “I can say without reservation that the community of Virginia welcomed us with open arms and showed us so much respect. The local crew members showed us a Virginia-good time — they fed us, taught us songs and, generally, welcomed us.”