Where Was Black Christmas Filmed?

Christmas is not just the time for cheer, but horror as well, since ‘Black Christmas‘ brings its share of chills. The slasher movie is a remake of the 1974 movie of the same name, which was one of the first examples to tell a horror story from the perspective of the killer. Now, the new movie promises to be a strong feminist take, where sorority girls find themselves being targeted by an unknown stalker. However, the killer finds that the women won’t take things lying down, as they go on the attack, launching a fight to the finish.

While the initial movie was shot in Toronto, in Canada, with the Toronto College serving as the major setting, the new movie makes use of different locations. The spatial setting is immensely important in a horror movie since it conveys a sense of eerieness and fear when required. 2019’s ‘Black Christmas’, starring Imogen Poots, and coming from Blumhouse Productions, makes use of the university space to weave a tale that will make us sit on the edge of our seats. You might be wondering about where the iconic Hawthorne College is located, and where the quiet town with a dangerous killer, actually is. We have you covered in that regard, as we bring the major filming locations for ‘Black Christmas’.

‘Black Christmas’ has been filmed within a remarkable time period, with principal photography being wrapped up in 27 days. Filming mostly took place in areas around Dunedin and Oamaru. The University of Otago provides the major setting for the movie. While filming in one’s own country with such time constraints would be difficult, the crew had a tougher job, since they were filming in New Zealand.

In case you are wondering why a story set in the East Coast of the USA had to be filmed in New Zealand, it is because of budgetary reasons. Amongst the places considered were Iceland, locations around Europe and South America. However, the crew could not find the kind of buildings and typography they were looking for.

This is when they decided to head to New Zealand, specifically the bottom of the South Island on the southeast coast, in Dunedin. Notably, the city is known for its cold weather, large student populations, as well as the Victorian and Edwardian architecture that came in handy during the filming. A three-day scouting mission confirmed their choice, after which, filming began. Local incentives encouraged the crew to film there, and the cold weather was an added advantage since the movie is set around Christmas.

Now, let us tell you the specifics of the filming locations for ‘Black Christmas’. 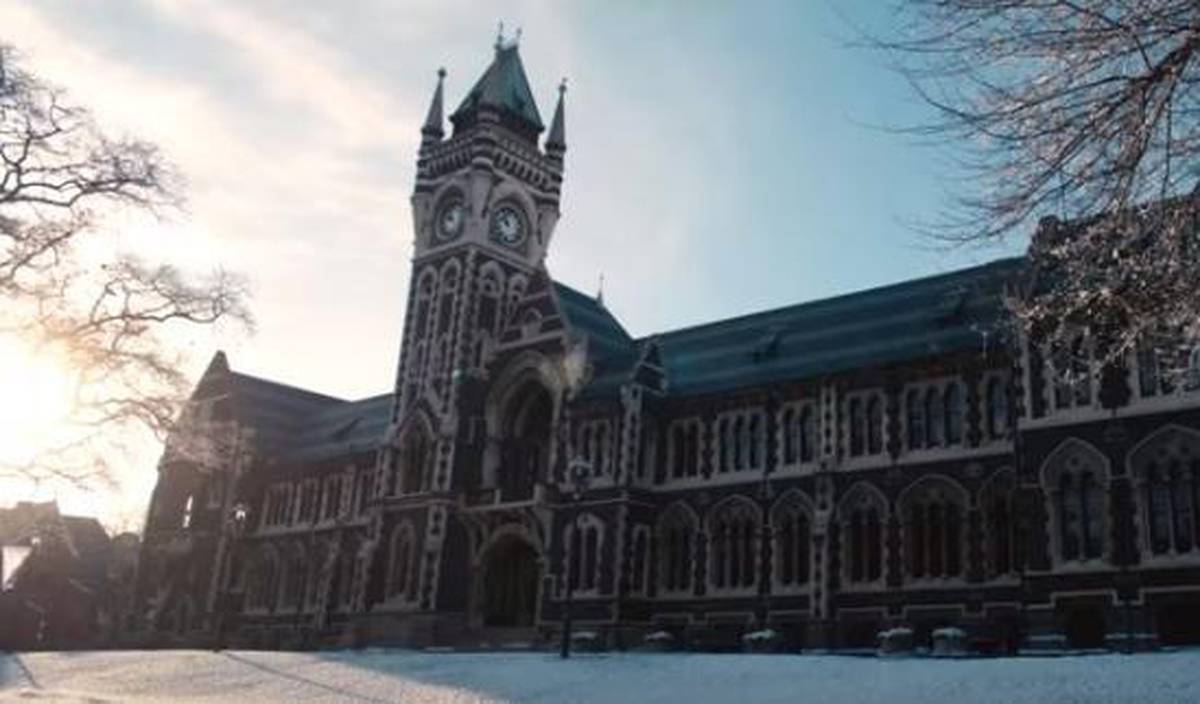 The University of Otago in Dunedin serves as Hawthorne College in the movie. Understandably, this is where most of the filming took place. Notably, some scenes were also filmed in Northern Otago. In the university, crews decided to film around the Clocktower Building, the gothic registry building. The scene was set with organic snow on the ground, and several students were part of the cast as extras. The film crew for ‘Black Christmas’ decided to team up with the film department of the University of Otago for more efficient shooting.

Apart from the university grounds, ‘Black Christmas’ has also been filmed at Vogel Street in Dunedin, according to local news reports. We understand that sequences were shot inside the Heritage Cafe, which is located on the corner of Jetty and Vogel Streets. The cafe was closed to the public and decked out with Christmas decorations. The festive setting was driven home by the faux snow covering a car across the street, from the cafe.

Phil Turner, the location manager for ‘Black Christmas’ commented on how Dunedin offered a wide array of locations for filming, and how the crew loved working there. That being said, it was tricky filming in Dunedin, since the signs had to be changed from NZ/British to American. Cars too, were right-hand drives, so the correct kind had to be brought in. When streets could not be closed, driving scenes were shot on the stage. Luckily they found an abandoned area with some houses and schools, which was quickly taken over by the crew for street scenes and wider shots. To nail the look of the front lawns, picket fences, and walkways, the crew simply shot some scenes in the US, merging it with the shots from Dunedin.

Speaking of the crew taking over an abandoned area for shooting, this brings us to the Campbell Park Estate, located in Otekaieke in Oamaru’s Waitaki Valley. The estate has a building that producer Adam Hendricks found to be spooky. The selfsame building seems to have served as the sorority house for the girls being hunted. Naturally, the area helps to set the mood for the horror that unravels in ‘Black Christmas’. Since the Campbell Park Estate has hosted several major movies including the ‘Lord of the Rings‘ trilogy, it makes sense that the crew of ‘Black Christmas’ would use the ideal and unpredictable area in the Waitaki Valley countryside, to shoot their film.

In conclusion, ‘Black Christmas’ has operated under budget constraints, paying heed to the locations used, choosing them with care, to deliver an effective and wonderful new movie in the slasher genre.