Where Was Coyote Filmed?

‘Coyote’ is a crime television series that dives into America’s political situation. The story is told through the character of Ben Clemens (Michael Chiklis), who is assigned to the southern US-Mexican border for patrol duties. Completing 32 years of unwavering service guarding the immigration wall, Ben begins to realize that he hasn’t seen it all. On discovering a mysterious tunnel linked to an unauthorized transport of shipments from Mexico to the USA, he is called for assistance on the other side of the border. Life gradually unfolds itself making Ben question his conviction and beliefs.

Created by David Graziano, Michael Carnes, and Josh Gilbert, ‘Coyote’ stars Michael Chiklis as Ben Clemens, who makes his way to Mexico against sweeping clusters of foliage across a never-ending horizon. He is soon enveloped by danger as his job coaxes him into venturing further into alienating territories and desolate backdrops. The story is abundantly portrayed through practical and realistic transitions within different locations. So where is the show filmed? Let’s find out.

‘Coyote’ is filmed in Baja California, Mexico. The locations swing back and forth across southern landscapes where the series is based on. Filming commenced in 2019, which tumbled into a momentary pause in March 2020 because of the pandemic. But it soon resumed course and was accordingly wrapped up in September 2020. Let’s dive into details.

Wait till you see what we’re doing out here. #coyote @paramountnet 2020 pic.twitter.com/YGQtwkghV3

The filming locations diverge into a set of panoramic backdrops located in different parts of Baja California, Mexico. A significant portion of the series was captured in Tijuana, the largest city of Baja California, located just south of San Diego, California. Mexico’s border city is famous for the commotion of its primary street market, although the series also features its rocky shores and intimidating ridges. There is a scene where El Catrin (Juan Pablo Raba) threatens Ben Clemens to work for him. The entire shot is staged in what resembles a stadium encircling a stretch of empty galleries. 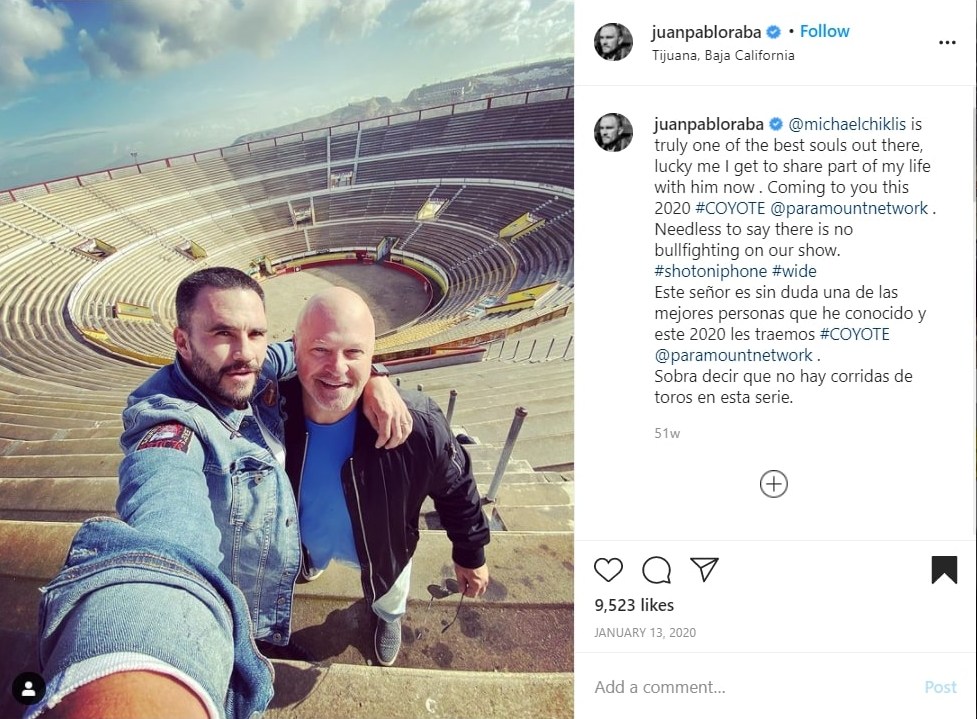 Other parts of the series were filmed in the desert of Baja California. Situated along the upper part of the Baja California Peninsula is a dizzying sweep of land, which serves as a backdrop of the show. It runs towards the south of border city Tijuana, and the reservoir of El Oasis stands somewhere in the northeastern end of the state. Pictures posted by Chiklis on Instagram show him decked up in vast swathes of sand, as he put it: “I am but a grain of sand in this vast desert wilderness.”

An unusually bewildered Chiklis posted several pictures and shooting clips where he seemed to be astounded by the location’s immensity. He also stated that his filmography is invariably resplendent with different shooting locations, yet filming ‘Coyote’ cradled in Mexico’s limitless expanse qualifies as a first.

Several scenes were also shot in the Sonoran Desert, which is the hottest desert in Mexico. The vast stretch of sand is spread across Southwestern America in Arizona and California and of Northwestern Mexico in Sonora, Baja California, and Baja California Sur.

This shot was taken by my friend & show-runner on #coyote David Graziano. The Sonoran desert 🌵 is so vast, it’s strangely claustrophobia inducing. So many incredible, exhilarating stories from the making of this show. @CBSAllAccess pic.twitter.com/ZcT1hLvksu