Where Was Let Them All Talk Filmed?

Directed by Steven Soderbergh and written by Deborah Eisenberg, ‘Let Them All Talk’ is a comedy drama film that follows a Pulitzer-winning novelist who goes on a trip in an ocean liner with some of her friends and nephew as she comes to terms with her past. On the ship, a young man falls in love with a literary agent. If you are wondering where this dialogue-heavy film was shot, here is everything you need to know.

Let Them All Talk Filming Locations

This HBO Max film was shot in an unusual manner with Soderbergh himself behind the camera. It was shot almost entirely on the British transatlantic ocean liner RMS Queen Mary 2. Here are the specific details about the filming of ‘Let Them All Talk!

The crew members of ‘Let Them All Talk’ were equipped with little equipment, and no external source of light was used during filming. Hence, every scene is lit only with natural lights. The principal photography began in August 2019 and lasted for two weeks on the ship. The people on board Queen Mary 2 were used as extras in the film. Ellen Mirojnick, the costume designer of ‘Let Them All Talk,’ shared a picture from the ship of its lead actress Meryl Streep on her Instagram handle. 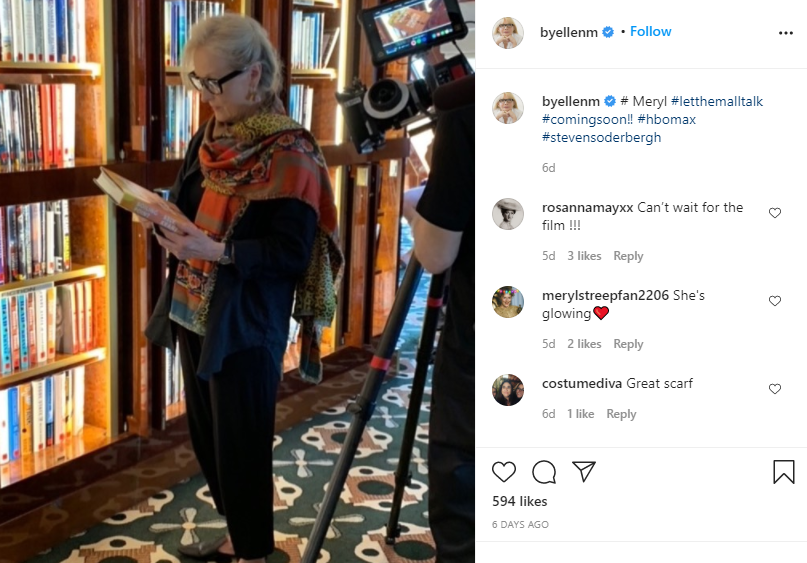 The opening scenes of the film were shot in New York City, New York. Some of the prominent films shot in New York City are ‘Taxi Driver‘, ‘Birdman‘, ‘The Amazing Spider-Man’, ‘The Dark Knight Rises‘ among others. Some portions were also filmed in England. The ‘Harry Potter‘ series, ‘Gladiator‘, ‘Fantastic Beasts and Where to Find Them‘, ‘Kingsman: The Golden Circle‘, ‘Jurassic World: Fallen Kingdom‘ among others were also shot in England. The shooting was wrapped up in late August, as the ship crossed from New York to Southampton via the Atlantic ocean.

Soderbergh used the story outline from Deborah’s script and allowed the actors to improvise in the film. Talking about the unique way in which the film was made, Streep told Entertainment Weekly: “I told [Soderbergh] he was gonna ruin everything for every director, and every production designer, and everything else, because he made the movie for 25 cents — I know that’s what I was paid. Then it was made in two weeks, and it was a free ride on the boat.”

Dianne West, one of the main actors in the film, added: “The only equipment was sound equipment. Steven held the camera in a wheelchair and just rolled along. None of the lights, and the trucks, all that stuff that goes into making movies, there’s none of it. There was Steven and this new camera.”