Where Was ‘Lost in Space’ Filmed?

Netflix’s ‘Lost in Space‘ tells the story of space colonizers who veer off their mission due to unforeseen circumstances, and are forced to crash-land in a deserted planet. There, they have to make do, surviving in their new habitable home, while fighting their own demons, trying to get back to the spaceship to carry on with the mission. The science fiction series happens to be a reimagining of the 1965 series of the same name, which in turn is adapted from ‘The Swiss Family Robinson’, an 1812 novel.

Viewers must be aware that the show is a space adventure and we see a lot of alien planets. Some of these are Goldilocks planets or habitable planets. As events play out here, you might be thinking that most of the scenes have been shot in a studio, using CGI.

You wouldn’t be alone as Molly Parker, who plays Maureen Robinson commented, “I thought when we were first starting that, because it was sci-fi, we were going to be on the [sound] stage a lot and doing green screen — which there was a fair amount of — but we also shot on location for at least half of it.” Naturally, this must be raising your curiosity about which locations are actually a stand-in for the alien planets we see. We have you covered in that regard.

Michael Gazetas, the location manager for ‘Lost in Space’ laid out the locations in Canada where the show has been filmed. He said, “We filmed in almost every municipality in Metro Vancouver and in other areas of the province, such as Squamish and Kamloops. A majority of the 2nd unit filming occurred near Cache Creek at the CN. In Langley, we mostly shot at farms including the Johnson Farm and Emerald Springs where ‘Legends of Tomorrow‘ and ‘Travelers‘ were also filmed. In North Vancouver, most of the filming took place in the Lower Seymour Conservation Reserve and Lynn Canyon Park. We had the opportunity to collaborate a lot with the community in Lynn Canyon which was great for the crew and the community.”

Burk Sharpless, one of the writers on the series, commented that the show has been committed to shooting on location, with natural lights, which is atypical of science fiction shows. The design has been described as having one foot in reality, and another foot in wonder. Thus, it is a marriage of real-life locations and CGI.

Notably, most of the studio work went on at Bridge Studios on Boundary Road in Burnaby. Some of the spike mountains and giant stone arcs that we see are all CGI, though they are based on real-life locations, including the rugged Nā Pali Coast in Kauai Island, Hawaii and the Arches National Park in Utah, respectively. Now, let us get into the specifics of the filming locations of ‘Lost in Space’. 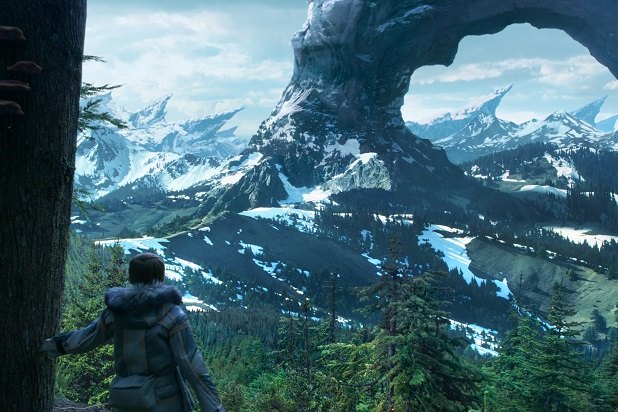 In Vancouver, the shooting mostly took place Squamish and Seymour Watershed, which is in Northern Vancouver. Squamish is located to the north of Vancouver and is at the northern tip of Howe Sound. It happens to be surrounded by mountains, a granite monolith, as well as a waterfall falling down a series of cliffs. Among the filming locations used in Squamish is the Brohm Ridge and Mount Garibaldi, located near Alice Lake Provincial Park. The Chek Canyon Recreation Area Sea-to-Sky Highway, in Squamish, has also served as a filming location.

Seymour Watershed has been chosen due to its remoteness, which would allow the crew to pass it off as an alien planet. The area has been used to film various scenes, including the Robinson’s Jupiter 2 set.

Lynn Canyon Park in Northern Vancouver has also been used to shoot some of the day and night scenes, including the effects of fog. The location manager spoke about how the crew enjoyed interacting with the community at Lynn Canyon. Some filming also took place at Greenwood Park, according to reports.

Other Locations in British Columbia:

Some of the scenes have been shot in other places in British Columbia, although many of these sites are close to Vancouver itself. Among these is Watts Point Quarry near Murrin Provincial Park, which itself is near Brittania Beach. Other locations include Robert Burnaby Park, Ashcroft and Cache Creek. Specifically, the crew was seen shooting in a field between the towns of Ashcroft and Cache Creek. Some filming also took place in Langley, at the Johnson Farm and Emerald Springs.

For the Iceland shooting locations, Netflix obtained permission from the Environment Agency of Iceland, for filming at Skógafoss and Dyrhólaey in South Iceland.

The waterfall at Skógafoss served as a backdrop for filming, while the broad black beach located west of Dyrhólaey, also served as a location, because the crew needed to feel close to the water, to capture its power, which makes for greater impact in the show. Gullfoss waterfall, located on the Golden Circle route, serves as the third shooting location in Iceland.

The crew has had to cope with changing weather conditions but has worked with around 100 people for the filming.

As is evident, the locations have been chosen with care, especially in places where there has not been much previous filming. Places have also been chosen for their mere isolation, to capture and portray the scenes of the alien planets perfectly. The location choices are definitely one of the many factors that make ‘Lost in Space’ stand out and seem so realistic an experience.