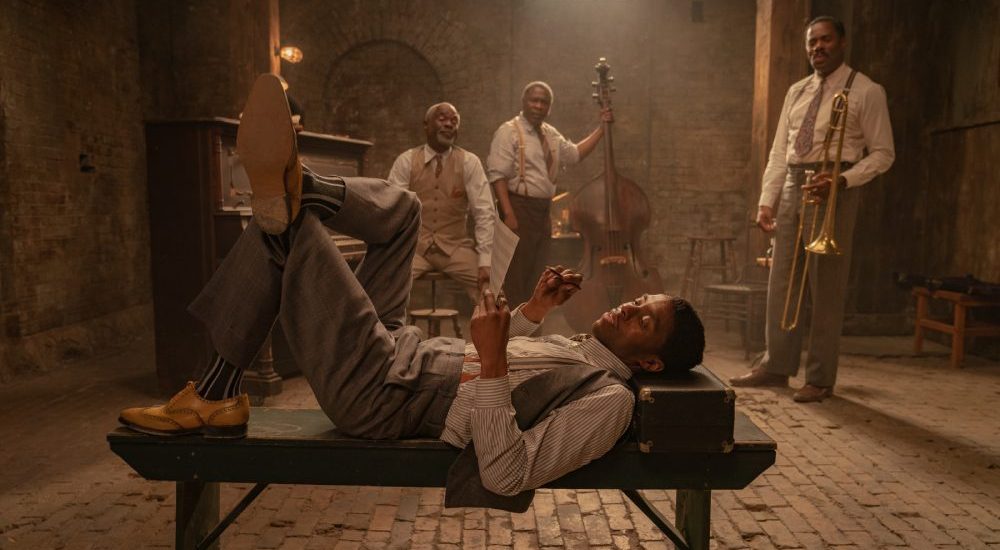 Fine performances and an even better storyline are what make ‘Ma Rainey’s Black Bottom’ so unique. For a film that discusses the plight of the African-American community, it manages to retain an air of authenticity while relaying tragic events that unfold over a single afternoon in 1927. If you wish to learn more about where the movie was shot, then we have got your back.

Although set in Chicago, ‘Ma Rainey’s Black Bottom’ was actually shot in Pittsburgh. Filming took place in the summer of 2019. It commenced on July 8, 2019, and ended on August 16, 2019. Unfortunately, Chadwick Boseman (Levee) passed away on August 28, 2020, after a secret battle with colon cancer. The film was in post-production at that point in time. So, with this in mind, let’s get down to the nitty-gritty, shall we?

A casting call was held at the Monongahela Room at the DoubleTree hotel in Downtown Pittsburgh. People of all ages were welcomed, and no acting experience was required. According to reports, they were actively looking for African-Americans for the roles of paid background extras, stand-ins, and possible featured talent. In another notice, they sought Caucasian men and women with a natural look who were above 18 years of age to work between July 9, 2019, and July 11, 2019.

The casting line to be an extra in the @Netflix film of @AugustWilson’s “Ma Rainey’s Black Bottom,” Executive Produced by #DenzelWashington,
is still wrapped around the corner at the @DoubleTree in @DowntownPitt. Excellent job, #Pittsburgh! #HillDistrict #MaRaineyMovie pic.twitter.com/1KIpFUC5LX

Finally, they were also looking for African-American female dancers in their 20s to shoot on July 8, 2019. Auditions for it took place on June 24, 2019, at the Millennium Dance Center, which is situated at 2504 E. Carson Street. It was James Mahathey who scouted the locations for the film in Pittsburgh. The North Side is one place that features prominently in ‘Ma Rainey’s Black Bottom.’ Many facades between Brighton Road and Galveston Avenue were repainted and retouched so as to replicate 1920’s Chicago. Ma’s altercation with the policeman was filmed here.

Denzel new Netflix movie “Ma Rainey’s Black Bottom” is now casting dancers in Pittsburgh.
Casting directors are casting dancers to work on scenes. Talents will be $595 per rehearsal & $885 per shoot day. Rehearsals will take place on July 3rd and filming will shoot on July 8th.

This is also where the exterior shots of the recording studio were taken. The interior scenes, however, were captured at 31st Street Studios in the Strip District. Apart from this, a parking lot in the area was transformed into a narrow, brick-lined alley from where the characters enter the studio. The production had also applied for permits to shoot in Deer Lakes Park and other county locations.

Signs that advertised ice and coal deliveries also graced the exteriors of a building in the vicinity. HIP at the Flashlight Factory, situated at 831 West North Ave., acts as the convenience store where the bandmates go to buy Coca Cola for Ma. The Halsted Street stop for Chicago’s elevated railway was constructed at 32nd and Smallman streets.

It is great to have Emmy Award winning Glynn Turman in town to make another August Wilson work, “Ma Rainey’s Black Bottom” with Denzel Washington.

We are proud of his Pittsburgh Connections.

If you’ve seen the movie, then you must know that Levee’s new and expensive shoes play an important role. The character first lays eyes on them at the beginning itself. The store that houses them is actually located at 722 Wood St. in the Wilkinsburg business district. Mahathey recalled, “The windows were in pretty bad shape. We fixed up that whole storefront for them.” There is one scene in which Ma comes down the staircase of a hotel. This was filmed at a private home on North Lincoln Avenue.

A construction crew was instrumental in transforming the look of the property. Talking about it, Mahathey added, “We went in and cleaned the place up for him. We did some repairs on some stuff. It ended up benefiting him. The woodwork was there. We put some different lighting fixtures and curtains to dress up the place.” The exterior shots, however, were captured at 705 Brighton Road.

Vintage trucks and Model T cars were the final touches that were added to the neighborhood. Speaking about the entire process, Mahathey said, “We spent a good week, maybe two weeks to get it done — the awnings, the signs, the little storefronts being dressed out, the street being completely covered in dirt. There are lamp posts where there was dirt and trees.”