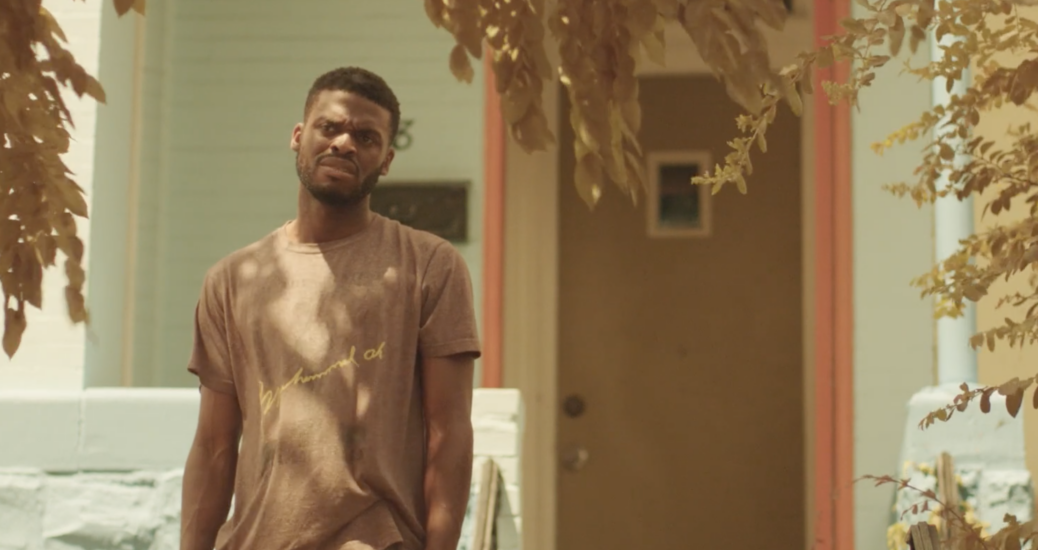 ‘Residue’ is the brainchild of up-and-coming writer-director Merawi Gerima. The film is an ode to persevering Black culture and heritage in a time and place rife with racial discord. In the recently released ‘Residue’, Jay, a filmmaking student from USC (University of Southern California) returns to a gentrified neighborhood in northeastern Washington DC that looks as foreign as it feels.

Location is centrally and inextricably linked to ‘Residue.’ ‘Residue’ takes on the mammoth task of juxtaposing Jay’s attachment to his home turf, Q Street, with the subsequent detachment and displacement he experiences in post-gentrified Q Street. How, with strategically-planned locations, Gerima captured the spirit of ‘Residue’s’ Black neighborhoods is a story in itself. We delve deep.

Budgetary restrictions threatened to limit the visual scope of what ‘Residue’ could be – at one point, Gerima himself had to double as sound mixer and boom operator. For lack of better recourse, the writer-director was forced to find out-of-box solutions to age-old filmmaking woes: Gerima let authentic sights and sounds feed into the visual and aural landscape of the film.

The guerilla filmmaking tactics of ‘Residue’ meant that scenes were shot on-the-fly and actors’ actions and reactions captured almost naturally. Ironically, this added more nuance to the finished cinematic product. On his unorthodox filmmaking techniques, the filmmaker divulged, “It’s interesting because we had a mantra of just allowing the imperfections to seep through. It allowed us to be free and be open and capture things as they were happening, so it has taken on this kind of documentary element.”

The movie is practically visual poetry written of and for the city of Washington DC. It makes sense then that Gerima would uphold the integrity of the film’s subject matter and shoot in his hometown of Washington DC.

Ava DuVernay’s (‘When They See Us’) newest venture, a grassroots arts and advocacy collective called ARRAY, recently acquired ‘Residue.’ The collective amplified the film’s release with a snapshot of Gerima hard at work directing the film in the American capital and added some compelling glimpses into his background as a bonus.

Meet @gerima_gang, the multi-hyphenate creator of #ARRAYNow’s upcoming @netflix release, RESIDUE. Here are 3 things to know about Merawi Gerima. 1. He comes from a family full of storytellers and filmmakers. Both of his parents are trailblazing members of the movement known as the “L.A. Rebellion,” a generation of filmmakers who fought to tell real Black stories through a Black lens in the 60s, 70s and 80s. 2. RESIDUE was inspired by Merawi’s experience with the gentrification of his hometown, Washington, D.C. After realizing that the change was changing him, he began writing RESIDUE. 3. Merawi is an alum of the USC school of Cinematic Arts. #ARRAYResidue

In ‘Residue’, Gerima not only gives audiences insight into his poignant life experiences but also welcomes them with open arms into his family home. Some scenes from ‘Residue’ were shot in Gerima’s mother’s own basement. The writer-director made sure to share a scintillating video of the shooting taking place.

The writer-director also paid tribute to his ‘battle-tested’ cinematographer, Mark Jeevaratnam, with on-set sneak-peeks of filming in Washington DC.

My brother Mark Jeevaratnam @jee_rilla , the Battle-tested Cinematographer of #Residue. Our brotherhood is forged by the brutal process of guerrilla filmmaking at its most intense. Wait till you see the type of images this man created out of nothing. #DCStillOurs (Pic #2 was Day 1 of shooting in 2017 😂🔥) Sept 17 on #Netflix via @arraynow & @ava 📸 @melketsadek @sirius_leee @alexjbledsoe @laurentakespix ——- #DontmuteDC #dcornothing #beatyafeet #moechella #gentrification #arri #blackfilm #cinematography #lighting #gogo #DC #camera #lens

Gerima posted to Instagram a behind-the-scenes look into how grueling and challenging filming for ‘Residue’ proved.

This was us, filming in 2018. Film production is a mirror. It shows you everything good and bad about yourself in ways you can’t look away from. It’s also physically exhausting. Bammas was SPENT!!! Whew Lawd! glad thas over lol. #RESIDUE, coming Sept 17 on #Netflix via @arraynow & @ava ——- – — – #DontmuteDC #dcornothing #beatyafeet #moechella #gentrification #blackfilm #DC