Here Are All The Locations Where ‘My Spy’ Was Filmed

Peter Segal’s ‘My Spy‘ offers a fun twist to spy fiction, and subverts it to create an action-packed quirky family comedy. The film manages to spoof the genre while also adhering to all its tropes, bringing to us something oddly familiar, yet bizarre. But for all the good reasons, mostly. Segal is best known for his work in comedies, particularly for his collaborations with Adam Sandler, including ’50 First Dates’. But he has previously directed another spy parody, Get Smart’, that turned out to be absolute laugh riot.

If ‘My Spy’ had a unique selling point, it would undoubtedly the unlikely pair in the lead and their charming chemistry. The film follows JJ, a hardened CIA agent, who works with brawn over brains. But due to his lack of people skills, he is demoted and given a last shot with a demeaning domestic assignment. He needs to surveil and keep tabs on a single mother, Kate and her nine-year-old daughter Sophie.

But things take a drastic turn when Sophie catches JJ spying on her family, and records it. JJ, who desperately needs to succeed in his mission, agrees to teach the girl how to become a spy in return of her now blowing his cover. The rest of the film explores how this unlikely duo team up to fight crimes.

‘My Spy’ stars wrestler-turned-actor Dave Bautista as the hardened big man, JJ. While Chloe Coleman plays the precarious nine-year-old Sophie. Bautista has proven his penchant for comedy with his performance in ‘Guardians of the Galaxy’. But it is Coleman, talented beyond years, who is the real scene stealer in the film. ‘My Spy’ also stars Kristen Schaal, Ken Jeong, Parisa Fitz-Henley and Grey Bryk. The film is set in America and follows the CIA agent in a domestic operation that takes him to Chicago. In case you’re wondering where the film was actually shot, we’re here to help. Here’s everything you need to know. 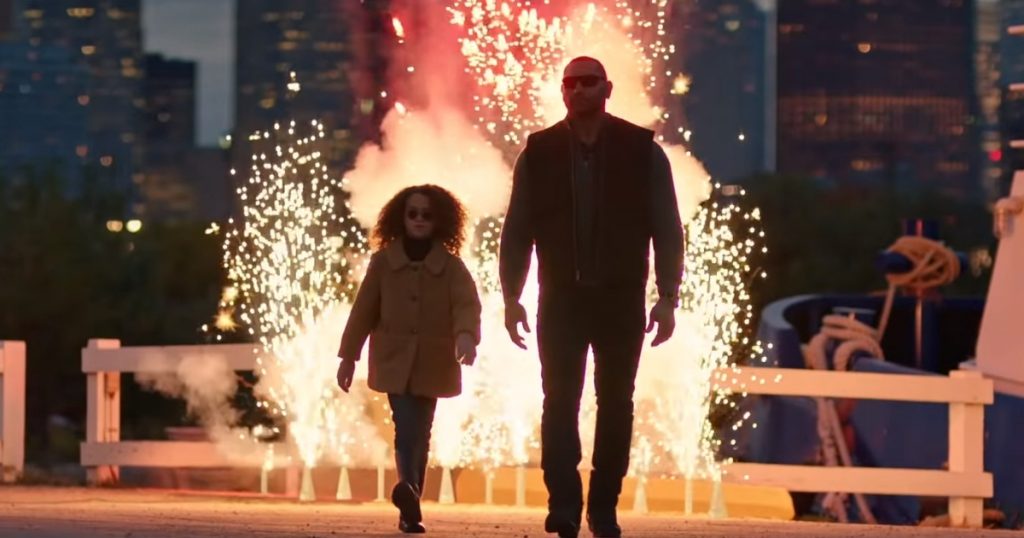 ‘My Spy’ is an American production, with Bautista serving as one of the executive producers, along with Peter Segal, Chris Renders, Robert Simonds and Gigi Pritzker Ontario. However, the production for the same took place in Canada, where the film was shot entirely in Toronto in 2018. ‘My Spy’ made use several sets across the city, both inside studios, and outside in public locations. Read on for the details.

I may be a few bucks short when I wrap on #MySpy but @parisafitzhenley (aka Ms Potty Mouth) is in real financial trouble. @chloecolemanact is going to need a much bigger #swearjar

The principal photography for ‘My Spy’ commenced on October 15, 2018 and concluded by the end of next month, on November 30, 2018. Toronto has long been a favourite for filmmakers. In fact, the city is colloquially referred to as Hollywood North. There are several reasons for this as Toronto provides with a great amount of studio space coupled with diverse landscapes. The city is not only accessible, but also resourceful and includes reliable crews.

‘My Spy’ does feature establishing shots from Chicago and Washington DC. In fact, in one of the early scenes, one can easily spot the Capitol Building. But the filming for the spy comedy primarily took place across Toronto. While the exact locations have not yet been confirmed, the production made trips to Royal Ontario Museum, and Distillery District, where the filming could have taken place. However, this has not been verified. Interestingly, Peter Segal has previously also used Distillery District as the location of the Callahan Auto Parts factory in his 1995 film, ‘Tommy Boy’.

The only confirmed location where the shooting of ‘My Spy’ took place is Mel Lastman Square, in North York. A hilarious but heartwarming sequence of the film featuring both Bautista and Coleman was filmed here in October 2018. The crew had installed a specific ice rink on top of the existing rink in Mel Lastman Square. This makes sense as the film is largely set in Chicago, despite being filmed in Toronto.

Toronto is known for playing different cities, much like it does in ‘My Spy’. The city played Boston in ‘Good Will Hunting’, and substituted for New York in films like ‘American Psycho’ and ‘The Incredible Hulk’. In ‘My Spy’ Toronto substitutes primarily as Chicago, while certain scenes also feature it as Washington DC. Of course, this is not the first time the city is being used to play Chicago. Toronto has been famously filmed as Chicago in ‘My Big Fat Greek Wedding’, and, interestingly, ‘Chicago’. It was also recently used as a substitute for the TV series, ‘In the Dark’.