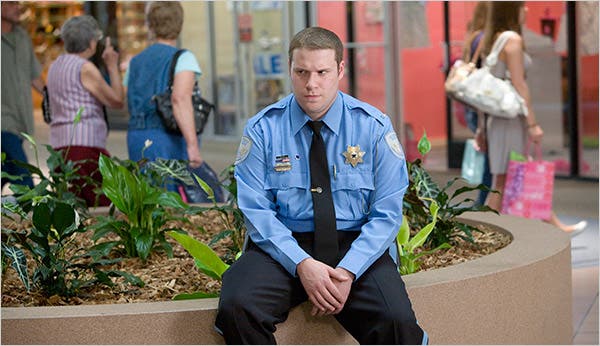 ‘Observe and Report’ might sound like a serious police procedural film or an intense investigative movie, but it is far from that. The 2009 film does not even revolve around a detective or a proper cop for that matter. It is a black comedy film starring Seth Rogen. Rogen’s involvement itself should tell you what kind of comedy the movie sports.

Rogen plays the character of a mall security guard, Ronnie Barnhardt. He wishes to join the police academy but has been unable to do so. The central premise of the film involves Barnhardt attempting to stop a flasher who has been disturbing visitors to the mall. However, when he fails to stop the flasher, a police detective is called to handle the case. There is a hilarious romantic interest plotline too.

As such, there is no distinct or integral location that proves to be a crucial setting for the film. There is the mall that Barnhardt works at, obviously. However, the story could have practically been set anywhere in the United States. There are malls and mall security guards everywhere, after all. Yet, several viewers might have been curious to know where ‘Observe and Report’ has been filmed.

To begin with, ‘Observe and Report’ was entirely filmed in the state of New Mexico in the United States. To be more specific, filming was largely carried out in and around Albuquerque. This is where the critically acclimated series, ‘Breaking Bad‘ was set and filmed too.

@AlexAllTimeLow Yo, observe and report was filmed all in New Mexico… Which means u should come here!! http://tinyurl.com/chhl6s

Sunshine Cleaning. Observe and Report. Both filmed in New Mexico. Both seen by me (in North Carolina). There was blood.

As mentioned earlier, the mall proves to be the most distinct setting location for ‘Observe and Report.’ The protagonist is a mall security guard trying to take care of a flasher who is tormenting the mall’s visitors after all. Scenes set in the mall were filmed at the Winrock Town Centre shopping mall on 2100 Louisiana Boulevard in Albuquerque, New Mexico. While Winrock Town Centre was once considered to be a premier mall, it had been struggling at the time of the movie’s filming. That would have certainly made it more convenient for the film’s makers to shoot ‘Observe and Report’ there.

WTF? Observe And Report was shot at Winrock Mall in Albuquerque??

Moving on, Winrock Town Centre and Albuquerque, in general, were not the only places where ‘Observe and Report’ was filmed. The movie had also been shot at Bosque Farms, which is also in New Mexico. Bosque Farms is a village in the state’s Valencia County. As of 2010, the village’s population stood at 3, 904 people.