Where Was ‘Outbreak’ Filmed? 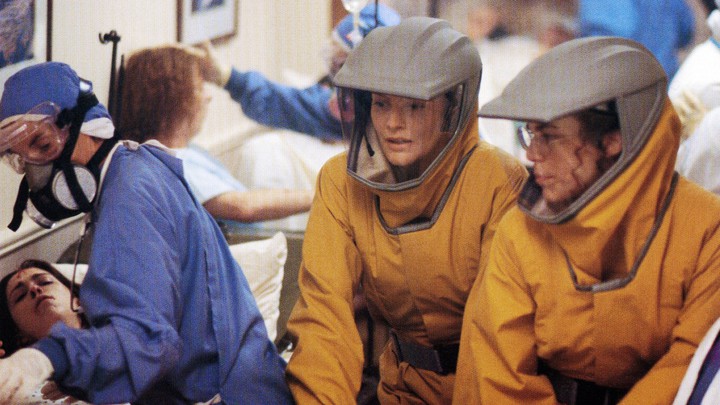 ‘Outbreak’ is an epic disaster movie featuring a stellar cast and a thrilling premise. The 1995 movie revolves around a deadly viral pandemic and coincidentally, an Ebola virus outbreak was ravaging the country of Zaire (presently known as the Democratic Republic of Congo) at the time of the film’s release. The coincidence is even more astonishing since Zaire is the place where the fictional viral outbreak in the movie originates from.

The film stars actors like Dustin Hoffman and Morgan Freeman. It revolves around a bunch of scientists who race against time to find a cure to a fatal virus outbreak.

‘Outbreak’ is a movie about the fight against a deadly pandemic in a tiny, idyllic Victorian town in the United States of America. A large part of the movie’s action takes place in this fictional, Californian town known as Cedar Creek. Several scenes are also set in the African country of Zaire and other places in the United Staes. Hence, several viewers might be wondering where ‘Outbreak’ is filmed.

To begin with, a large portion of ‘Outbreak’ was filmed in Ferndale, California. The city in Humboldt County, California doubles up as Cedar Creek for ‘Outbreak.’ The idyllic city is known for its well-preserved Victorian architecture.

“Outbreak” (1995) is the Humboldt-shot movie of the week. It stars Dustin Hoffman, Rene Russo, and Morgan Freeman in a battle against a viral epidemic. Ferndale was utilized among other locales. #Humboldt pic.twitter.com/ILhr9mhkL8

Apparently, the residents of Ferndale had not been too enthusiastic for a big-budget Hollywood project to be allowed to film in the city due to the disturbances that it would lead to. It was the city’s Mayor that managed to convince the city’s residents with a persuasive speech, highlighting the economic opportunities that the filming would bring. He said, “I’m here to tell you Santa Claus wants to come early this year. Unless I hear some compelling reasons why not to invite him, we’re going to welcome him.”

According to local sources, Warner Bros. Studios ended up spending $3 million in the city. Local hotels, farmers, bakers and other businesses profited greatly. The filming also employed several locals, including several homeless people. At the time of filming, the production practically took over the city with helicopters and tanks on the streets that were used for filming.

Scenes set in the State Theatre were filmed at Ferndale Repertory Theatre on 447 Main Street, Ferndale. Kemp Building, also on Main Street was where the pet store scenes were filmed. According to IMDb, filming was also carried out in the nearby city of Eureka and Arcata.

As mentioned earlier, ‘Outbreak’ is set in several places other than the fictional Cedar Creek, like the African nation of Zaire. Scenes set in Zaire were actually filmed on the Hawaiian island of Kauai. The place has been utilized by various productions to depict exotic forests. For instance, ‘Jurassic Park.’ was filmed in Kauai.

Apart from Cedar Creek and Kauai, ‘Outbreak’ was also filmed at a handful of other locations. For instance, filming was carried out at Warner Bros. Studios in Burbank, California on Stages 22, 25 and 27. Furthermore, the Korean cargo scenes had been filmed on the S.S. Lane Victory: an actual cargo ship that was used in the Second World War, the Vietnam War and the Korean War. At the time of filming, the ship was docked on Pier 94, San Pedro, California.

Additionally, scenes set in the hospital had been shot on two different locations. The now-defunct Linda Vista Hospital on 610 South St Louis, Boyle Heights, Los Angeles was utilized alongside the Huntington Memorial Hospital on 100 Congress Street in Pasadena, California.