Where Was The Binge Filmed? 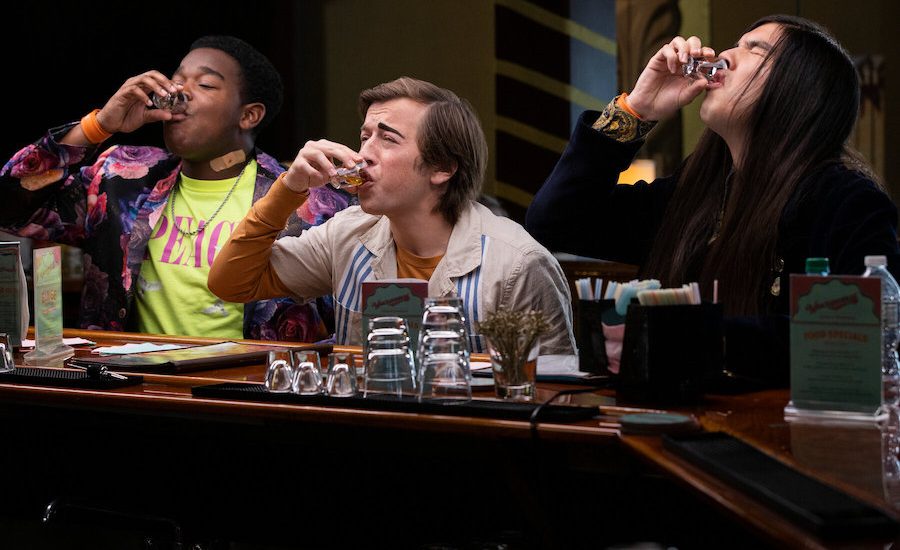 Hulu’s ‘The Binge’ is a teen comedy that focuses on the story of a teenager who just wants to ask a girl to prom. While he wants to focus on that, his best friend wants him to accompany him to the party of the year. According to the rules, this is the day of the year when they get a twelve-hour window to do as much drugs and alcohol as they want. As the hours pass by, the story takes hilarious twists and turns, and the teens run around the city, trying to find a way to the best party of all time. If you want to know where ‘The Binge’ has been filmed, here’s the answer.

‘The Binge’ is set in a near-distant future, where America has come up with a solution to its drug problem. Drugs and alcohol have been strictly banned, except for a twelve-hour window each year. In this time period, the whole of America, above eighteen years, is free to indulge in as much booze and drugs as it wants. This unique experience is captured through the story of a teenager named Griffin, and his friends, Hags and Andrew. Though the story is set in a school called American High, it is a way to extrapolate into the experience of the rest of the country. This meant that the film needed to create an aesthetic that would allow everyone in the audience to relate to it. For this purpose, the crew found perfect locations in New York. Syracuse serves as the primary filming location of the movie.

It's about to go down. Here's a behind-the-scenes look at #TheBingeMovie starring Vince Vaughn, @SkylerGisondo, @DexterDarden and Eduardo Franco. The original movie premieres this Friday on @hulu. (📸 Paul Viggiano/Brett Roedel) pic.twitter.com/evzVAQfayK

The story of ‘The Binge’ follows the story of three teenagers who prepare to witness the first Binge of their lives. They study at American High, which is where the first half-hour of the movie is set. The filming of these scenes took place at the former A.V. Zogg Middle School in Liverpool. The biggest party of the year happens at Carnegie Library. This is where the secret event takes place, for which Griffin, Hags, and Andrews have to secure yellow wristbands. The final half-hour of the movie takes place here, and the teens find a fitting conclusion to their 12-hour Binge. For filming this entire sequence, several locations were used. Some parts were filmed at the Carnegie Library. Hanover Square was also given a makeover to turn it into a party scene. The crew also used the Greater Syracuse Soundstage to orchestrate some of the craziest parts of ‘The Binge’.

When I was 19, my buddy, TJ took me to York Sq Theater to see an indie film called Swingers. I walked out and knew exactly what I wanted to do for the rest of my life. It was the first “art house” movie I ever loved, probably because it starred the funniest person on the planet. I started writing screenplays and my main character was always written for Vince Vaughn. I was blessed enough to write and produce w him on The Break Up, but having the chance to direct him in #thebinge was a dream realized. He might be a little older, and you might be wondering what he’s been doing lately but for all of you VV fans who have been waiting to laugh again, I promise you — he’s back…

FYI, the movie is called “The Binge,” and the production company is local- @americanhigh ! pic.twitter.com/kYWTsb5LdS

Additionally, the cast was also spotted filming in the Central New York region. The Onondaga Lake Parkway also features in several scenes of the film. Locals can also spot Clinton Square in the movie. For the scenes that feature the house of Griffin, Principal Carlsen, Andrew, and Seb, the crew turned towards the neighborhoods in the village of Liverpool and Village Burger. Some scenes were also filmed at a bridge in Van Buren.

That’s a wrap on my character “the punisher” in the incredibly funny and awesome movie #TheBinge – it’s my second time getting to work with the absolute legend @mrgarelick – It’s a never ending ball of fun- high energy and so many laughs !!! Thankyou to the wonderful cast and crew for having me – it was so cool to work again with the hilarious and talented @affioncrockett – You guys are gonna LOVE this movie !!!!!! #TheBinge #moviemaking #comedy ❤️🤣❤️

Today I was pushed to the limits with these amazing artists. @dexterdarden @dumbuardo @skylergisondo_og and the powerhouse @mrgarelick this one will go down as one of my favorite gigs ever. Day 1 of #TheBinge #waitforit @americanhigh #Deidre #motheroftheyear Deepest thanks to the #AmericanHigh Crew for an amazing day!