The show follows a young surgeon, Shaun who is on the spectrum of autism and suffers from Savant syndrome. He is a brilliantly abled medical professional but his co-workers do not socialize with him due to his condition. The show revolves around Shaun juggling his personal and professional relationships as he helps his patients with his skills while trying to impress the other doctors.

Where is The Good Doctor Filmed?

Many of you might be wondering where ‘The Good Doctor’ is filmed. The show is set in California, United States. The hospital depicted on the show has become a familiar location for viewers, apart from the protagonist’s house as ‘The Good Doctor’ is a series that is set in the same place. Its characters do not travel often and the action primarily takes place in a fictional hospital.

Vancouver, British Columbia has become somewhat of a hotspot when it comes to filming Hollywood productions. Its relative proximity to the United States and generous tax credits offered by the Canadian government have been cited as the primary reasons for producers to opt shooting movies and television series there. As of October, 2018, more than 30 television series were being filmed in Vancouver.

‘The Good Doctor’ is another show that is filmed largely in Vancouver, apart from other places in Canada. David Shore has cited economic reasons for the series being filmed in Canada. However, he does express a desire to shoot it in Los Angeles, California so that he could spend more time with his family.

Bird's eye view on filming of @GoodDoctorABC in #Vancouver today. Hope to see some of the stars! @WhatsFilming @yvrshoots pic.twitter.com/i9HJ8H71Ct

Firstly, Vancouver Community College is one of the locations that is passed off as the St. Bonaventure Hospital in San Jose. The college is mainly utilized for scenes set inside the hospital, most notably the ones that take place in the hospital’s cafeteria.

Moreover, the hospital’s exterior which boasts of picturesque glass walls might feel unfamiliar to residents of San Jose. That is because it is not actually filmed there. Most of the exterior shots of the hospital are actually filmed outside Surrey’s City Hall in Canada. Surrey’s Civic Plaza was also used to film the show’s fourth episode of the second season.

Season 2, Episode 4 of the @GoodDoctorABC is being filmed in Surrey Civic Plaza! Studios are making #Surrey a filming hub as the City is accommodating, has excellent spaces and supports local jobs! Bridge Studios employs 200 local staff for the show & 150 just for this scene! pic.twitter.com/SEPhhggcrj

Additionally, the board room of the hospital, as shown in the pilot episode of ‘The Good Doctor’ is actually filmed at Mountain View Cemetery in Vancouver. 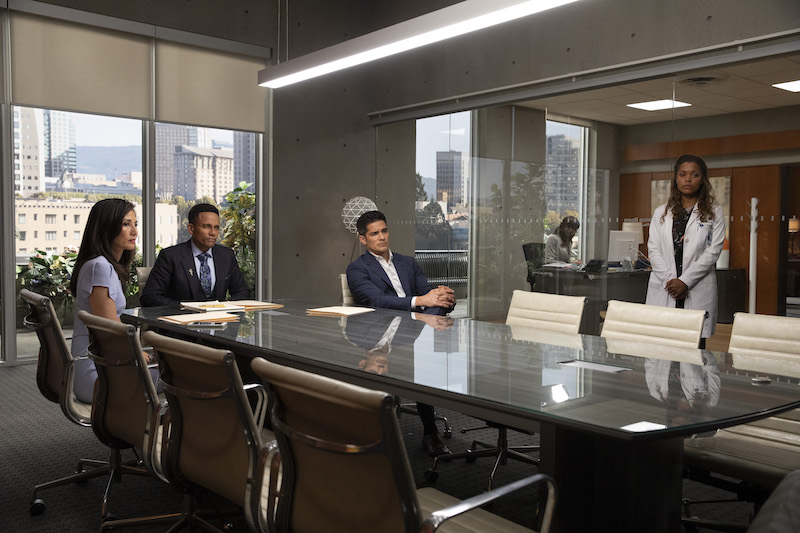 Then, in the same episode, Shaun is shown on the road in multiple scenes. To begin with, he walks on Casper Main Street to reach the bus stop. In reality, Cleveland Avenue in Squamish was the place where the scene was shot. Moreover, Deltaport Way stood in for an American highway in the first episode. In addition to that, the West Coast Railway Heritage Park was filmed to resemble a train yard.

Moving on, the third episode of the first season of ‘The Good Doctor’ saw Shaun race between San Francisco Municipal Hospital and St. Bonaventure Hospital in a helicopter to transfer a donated organ for his patient. The helipads of both the hospitals were actually filmed at Canada Post’s office in Vancouver, British Columbia.

In the same episode, East Lawn Building in Coquitlam, British Columbia doubled up as the San Francisco Municipal Hospital. Interestingly, the East Hall Building belongs to the Riverview Hospital which was closed in 2012 and is currently being remodeled as mental health facility. The exterior shots of the San Francisco Municipal Hospital had been filmed at Queen Elizabeth Theatre in Vancouver.

Some of the other locations that have been used to film ‘The Good Doctor’ include the British Columbia Institute of Technology, Campbell River Store in Surrey, Beach Grove Motel in Delta and Lamplighter Gallery Café in Langley City, Hinge Park, Provence Restaurant and Coopers Park in Vancouver.