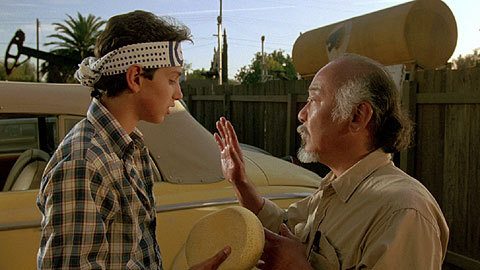 The popularity of martial arts movies does not need to be established or justified. They have proven to assimilate into the Hollywood formula rather handsomely. The most popular martial arts movie unarguably would be ‘The Karate Kid’ of 1984. In fact, the film is credited with popularising karate in the United States itself. The movie’s success led to it being developed into a movie franchise, followed by a 2010 remake. The film proved to be the biggest sleeper hit of 1984, raking in $100 million.

‘The Karate Kid’ revolves around a boy named Daniel who moves to California with his single mother. He finds himself struggling to fit in immediately. A bunch of karate students starts to bully him for dating a rich girl too. Fortunately, his Japanese landlord, Miyagi trains him to take them on.

The character of Daniel is essayed by Ralph Macchio while that of Miyagi is played by Pat Morita. Some of the other cast members of the film include Elisabeth Shue, Martin Kove, and Randee Heller.

Given the fact that ‘The Karate Kid’ has become a classic movie, several viewers would have been curious about the places that the movie is shot in. Its plot is primarily set in California as this is where the protagonist moves to. Was the movie actually filmed in California? Were other places used for filming purposes as well?

It shouldn’t come as a surprise that ‘The Karate Kid’ was actually filmed in the state of California. For instance, the South Seas Apartments on 19223 Saticoy Street in Reseda, Los Angeles was used to film scenes set in Daniel’s house. On the other hand, the place used to depict Miyagi’s apartment was an actual house on Gault Street in Canoga Park. However, the place has been demolished. 4072 Alonzo Avenue at Encino was used to film scenes in Ali’s home.

Went to The South Seas apartment where Daniel Larusso lived in The Karate Kid pic.twitter.com/M60sOcVn6k

The all-important climax scenes involving the All Valley Karate Tournament were filmed at Matadome on the campus of California State University. However, those aren’t the only places in California where filming was carried out. For instance, Leo Carrillo State Beach was used to film the scene wherein Daniel meets Ali. Scenes set in his school, on the other hand, were filmed at Charles Evans Hughes Junior High School in Woodland Hills.

11/9: Screening of The Karate Kid inside the Matadome, where the Championship scene was filmed http://t.co/pdrJoUJrpv pic.twitter.com/GQ0UwmGo9x

Moving on, scenes which were set in the Cobra Kai dojo were shot on 5223 Lankershim Boulevard. However, its exterior was shot on 5376 Wilshire Boulevard. Closeby, the scene set in Orient Express restaurant was filmed, at a place which is now Eleven City Deli on 5400 Wilshire Boulevard. Next, Golf ‘N’ Stuff on 10555 Firestone Boulevard is where Daniel and Ali go on a date. Chatsworth Reservoir was used to film scenes wherein Daniel gets trained. Filming was also carried out at Encino Oaks Country Club, Agoura Hills, Calabasas, Hyatt Westlake Plaza, and Malibu.

Filming for ‘The Karate Kid’ was carried out outside California as well. For instance, the first scene of the movie was actually filmed in Harrison, New Jersey. Filming was also carried out in Sedona, Phoenix, and Oak Creek Canyon in Arizona.