‘V for Vendetta’ has become one of the most iconic dystopian movies of all time. Its popularity and influence need not be explained. The movie is based on a comic of the same name by Alan Moore and David Lloyd. The film stars Natalie Portman, Hugo Weaving, Stephen Fry, and several others.

‘V for Vendetta’ takes place in a dystopian future in the United Kingdom. A fascist, totalitarian government has assumed dictatorial control of the country. A masked man named V plans and executes various murders, leading up to a massive revolt. A woman named Evey also works with V after being rescued by him. The film is written by Lana and Lilly Wachowski. The Wachowskis are known for working on ‘The Matrix‘ movies, ‘Cloud Atlas,’ ‘Jupiter Ascending‘, among others.

As mentioned earlier, ‘V for Vendetta’ takes place in a dystopian Britain. The movie makes use of several iconic places like the Palace of Westminster and a London Underground station. Hence, it is natural for viewers to wonder where the movie was actually filmed. Was it actually filmed in the locations that the story was set in?

To begin with, several scenes had actually been filmed in the United Kingdom. The iconic ending scene, for instance, was actually filmed around the Palace of Westminster, including Bridge Street, Parliament Street, Trafalgar Square, and various other streets in the vicinity. The area is a very sensitive one, in terms of national security. Hence, obtaining permits for it had been tough. According to some sources, it took the production nine months of negotiation to get filming access. There are also reports which suggest that Tony Blair’s son, Euan, who was a part of the production, helped with the access. 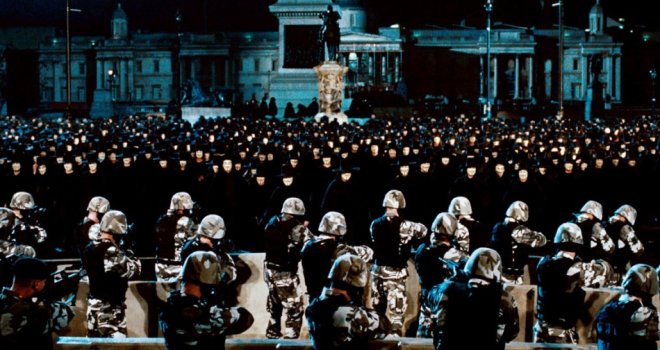 Apart from that, the scene set in the underground station was actually filmed at Aldwych tube station, which is not operational. Apart from that, filming in the United Kingdom was also carried out on Bridgeman Road, Thornhill Square, Portugal Street, Alwyne Road, Farringdon Station, Picadilly Circus, Strand, and Hatfield House.

Apart from location filming carried out in the United Kingdom, a large portion of the film’s shooting was undertaken in Germany. To be more precise, filming was undertaken at Babelsberg Studio in Potsdam, Germany. It is one of Europe’s largest movie studios boasting of 21 state-of-the-art soundstages.  The production facility has been used for various notable productions, including ‘Inglourious Basterds.’ This is where most of the interior filming of ‘V for Vendetta’ was carried out, including the scenes set at V’s house.

Love being back in Babelsberg Studios, last time I was here was for V FOR VENDETTA… pic.twitter.com/mY6UZ5z46E

Apart from that, several scenes had also been filmed on-location in Germany. For instance, the Larkhill scenes, the Norsefire rally scenes, and the Bishop’s bedroom had all been filmed in Germany. According to IMDb,  the prison camp scenes had been filmed at Güterfelde in Brandenburg, Germany.

IMDb also mentions that an underground scene had been filmed in Chicago, United States. However, this fact has not been confirmed by any other source and should be taken with a pinch of salt.