Which Are You The One Couples Are Still Together? 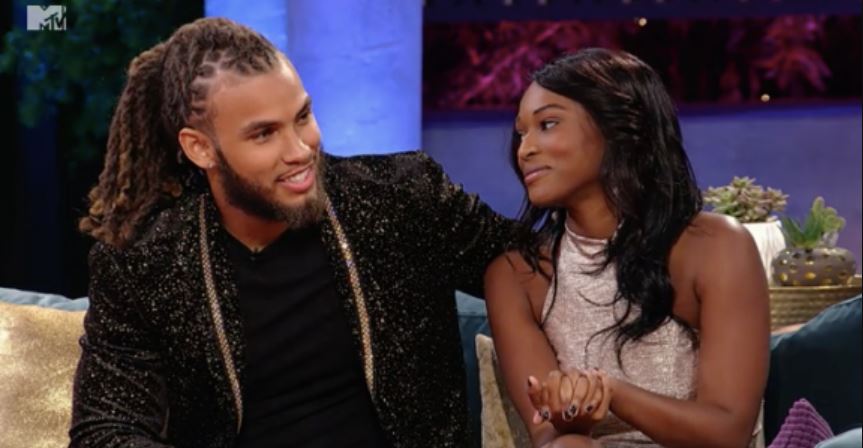 MTV’s ‘Are You The One?‘ or simply AYTO? is a series that uses modern-day technology to help 20-plus single men and women find their perfect mates and matches in a season. An algorithm that takes help from in-depth personal interviews, questionnaires, and compatibility tests identifies the ideal pairs among the participants. However, the results of this are kept from the contestants so that they can socially interact with one another and decide on a partner on their own. In the end, if perfect matches are found, they walk out with not only a companion beside them but also with a grand shared cash prize.

With the 8 seasons that have aired till now, we’ve seen a lot of relationships come and go, and now that it’s been a while, we’ve decided to compile a list of the couples who are still together. So, what are you waiting for? Read on!

Ethan and Amber met on the very first season of the show, back in 2014. And, ever since then, they’ve been inseparable. After finding each other during the filming of the series and falling in love in between the challenges, they got engaged during the reunion special. That very same year, they tied the knot in a private ceremony. Now, they’re the proud parents of two daughters, Scarlett and Serena, and work as online bloggers. Even though they’ve been together for years, they’re still infatuated with one another, a fact that is evident from their constant loved up posts on Instagram.

Last of the birthday spam (promise)!! At first I was a little bummed we couldn’t throw Serena a big party for her birthday – but honestly, our family celebration ended up being exactly what we needed. Social distancing has brought us together closer than ever – I’m really starting to cherish this unique fam time! (Also, HOW CUTE is Serena blowing out her candles? My heart….ugh I can’t. )😍 . . 🏰: @austinbouncehouserentals

Even though Curtis Hadzicki and Jenni Knapmiller weren’t a perfect match, they are still going strong. They both pursued different relationships while on AYTO?, with Curtis leaving with Shelby and Jenni walking out with John, but they reconnected after a while and announced their relationship on the reunion episode. Residing in California, the couple does give us a few glimpses of their lives, experiences, and travels on their social media, ensuring us that even though they were not technically a “perfect match,” their love will always prevail. You can check out one of their cute pictures, with an even cuter caption below:

A mountain isn’t easy to climb, but I’m grateful to be climbing with you. @jenniknapmiller #dowhatyoulove

How can we ever forget the power couple of season six? They weren’t a perfect match either, but by the finale, their bond was one that had become unbreakable. Even though Clinton’s match was with Geles Rodriguez and Uche’s was with Joe Torgerson, neither couple wanted to have an intimate relationship, and so, Clinton and Uche ended up together. Now, the personal trainer and the Wilhelmina model are engaged and planning for a life together. Clinton got down on one knee to propose to the love of his life in June, exactly three years after he first laid eyes on her. If you want to see more of them, make sure to check out their YouTube channel.

Still speechless. I honestly didn’t think love like this existed. I’m the most me, my BEST self – when I’m with you. No one loves me better 😭 My best friend. My protector. My lover. My fiancé (literally what!!!!!!!) – I can’t wait to be your wife ❤️ #nomatch #forever

The season 7 couple found a deep connection with each other among all the different challenges and personalities back in 2018, in Kona, Hawaii. According to their Instagram feeds, it looks like Cali Trepp has left her hometown of Chicago, Illinois, and moved to Miami, Florida, to live with her boyfriend and to foster their relationship perfectly. When this couple shares each other on social media, its a blend between romance and teasing – making it obvious that their relationship is just as fun as it is serious.

We know that the following couples didn’t technically meet while filming their respective seasons on the series, but we think that it’s important for you to know that even they have found love with one another.

Cam Bruckman from season 4 is currently engaged to Carolina Duarte from season 5. And, according to Carolina’s social media, the couple plan on getting married next year.

Happy 2 year anniversary to my sweet fiancé! I am so in love with you and I can’t wait to get married next year and spend the rest of our lives together! You are the man of my dreams and I am so blessed to have you in my life!

Happy birthday to my beautiful soul. My rock, my sunshine. I hope you enjoy your day and you make beautiful memories. Every day I spend with you is a day filled with love and I wouldn’t change it for anything. You deserve the world my lamazi suli. Happy birthday ❤️

Joe Torgerson from season 6 is currently in a serious relationship with Mikala Thomas from season 4. You can see their relationship progression on their social media and on her YouTube channel.

Not only are Anthony Martin from season 6 and Shannon Duffy from season 5 currently in a very happy and stable relationship with one another, but they are also expecting a baby girl very soon.

IT’S A GIRL!!!! 😭💓 You can clearly tell by my facial expressions that I was team girl 😂 Baby girl, me and daddy are so so excited to meet you and hold you!! You are so incredibly loved and supported by so many already. Daddy already is asking me to teach him how to do a ponytail and braid hair lol. You are going to be so spoiled and I cannot wait!!! I just want to hold you in my arms already 🥺 Thank you to everyone who came and joined us in this amazing celebration, you mean more to us than you’ll ever know! @alezyra and @marvynrr thank you for capturing these priceless moments for us!!! 17 weeks until you’re here and we all can’t wait to meet you princess 🤍

Read More: Every Relationship Status From Are You The One Season 8