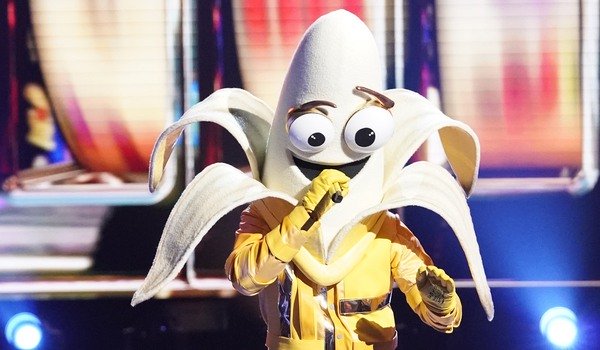 ‘The Masked Singer‘ Season 3 has given us a brand new group, where celebrity performers are hidden behind masks. As we try to figure out, who could be the person up on stage, we continue to be amazed by the skill and energy Group B brings to the stage. One of the finer performances has come from Banana. He performed Elvis Presley’s “A Little Less Conversation”. In fact, the performer’s voice is somewhat like Presley too, leading a fan to comment that their bet is on the performer being ‘The King’ himself.

However, wild theories aside, you must be eager to know whether there are thought out clues and guesses about Banana’s identity. We have got you covered in that regard. You can also check out Banana’s clue package below, to see if anything jumps out at you.

Banana’s clue package is set in a track field, where we see the performer napping. There is a cowboy hat next to him, and we can see red, blue, and white stripes. There is also a blowfish on the ground.

The clue package then gives us some narrative, as we notice the Banana partying in a school bus with two women, made of lettuce. Banana claims to have overdone it last night, and says “You’d think this was my first rodeo”. The clue package ends with Banana claiming to be hard on the outside, but a softie on the inside, not to mention, a total hoot at parties. Thrown amidst the various clues, is also a blue-collar, that jumps out at us.

Going by the clues, the most obvious guess has been Bret Michaels, the lead singer of Poison. Many fans believe this to be true because Michaels can be seen wearing a cowboy hat akin to the one in the clue package. The blue collar could refer to his line of pet products. Lastly, the party on the bus might refer to Michaels’ ‘Rock of Love Bus’, which is the third season of his reality dating show. You can check out a fan’s tweet about the same, below.

Banana is Bret Michaels, I can tell by the walk and dancing #MaskedSinger

However, Michaels’ normal voice is different from Banana’s, but that could be masked by the talented singer. Another guess that is out there, is that Weird Al Yankovic is the Banana. The comedian is somewhat of a cultural icon known for making parodies of songs. Moreover, his quirky humor would suit ‘The Masked Singer’.

Another comedian’s name has also been thrown into the ring. Fans believe Banana could be Jeff Foxworthy, who is from the south, explaining the hat. He has been part of the Blue Collar Comedy Tour in 2000. However, if that is the case, then a more likely option is Bill Engvall, as Jenny guesses.

Bill is a Texas native, which might explain the Banana’s accent, and has been part of the Blue Collar Comedy Tour as well. Moreover, in the teaser, we saw the Banana outfit being handed to someone backstage, which could be the backstage of a comedy club. Check out this fan’s tweet, who has read more into the clue package and decided that Banana is Bill.

#MaskedSinger. Banana 🍌 is Bill Engvall. He gave himself away when he said his daughter gave him a banana and used his signature tag line ‘there’s your sign’. Comedians can’t help themselves… 😝 pic.twitter.com/toehmUZrKC

One fan has gone as far as to suggest that Bradley Cooper is the Banana, as you can see here. However, this does not seem like a seriously thought-out guess. We are more inclined to agree with panelist Robin Thicke’s assessment, that Banana might be Darius Rucker from Hootie and the Blowfish. After all, the clue package shows a blowfish and says the Banana is a hoot.

Even if it is not Rucker, it could be one of the other bandmembers. You can check out a tweet below, where a fellow fan has hit upon the same idea.

Is Banana someone from Hootie & The Blowfish!? It's not @dariusrucker …I know his voice…but one of the other band members!? #MaskedSinger

At this moment, there are some solid guesses about Banana’s identity. Undoubtedly, in the upcoming episode, we will be able to narrow it down and eliminate some choices, when more clues come to light.

Read More: Who is Taco?