Who is Iliza Shlesinger?

In the booming rise of stand-up comedy shows, some have managed to knock us down from our seats due to its sheer ingenious comedy, and the others have been sidelined in the collective bulk of the ‘so-called’ types. These days, successful stand-up comedians resonate not merely with comedy but also with social issues either in observation or researched precision. Comedy stars like Hasan Minhaj are exceptionally famous for setting the stage for both comedies and being informed at the same time.

In this running line of observational social comedy, many female comedians have taken center stage to discuss all that’s funny and yet personal at the same time.

Who is Iliza Shlesinger?

One might already be familiar with Iliza Shlesinger through her quite popular stand-up specials on Netflix like ‘Freezing Hot’, ‘Confirmed Kills’, ‘Elder Millennial’, ‘Unveiled’ or ‘The Iliza Shlesinger Sketch Show’. She is daringly outspoken in her criticism of sexism, ignorance, and many other social issues that reveal gender norms and expectations. All her specials begin with her dog Blanche (who passed away later) running across the stage in an outfit that is likely to reveal the theme of the special show.

She has also made quite a few appearances on ‘The Today Show’, ‘The Tonight Show with Jimmy Fallon’, and ‘The Late Late Show with James Corden’. She is also the author of the book ‘Girl Logic: The Genius and the Absurdity’.

Iliza Shlesinger was born in Manhattan, New York and soon moved to Dallas, Texas, where she spent most of her childhood. She was quite attuned to comedy and did her first act of comedy at an open mic session in a coffee-house. She talks about this in her interview with The Rolling Stone:

“The first time I did stand-up was on Semester at Sea, which is a program I did in college. They had an open mic night, like a coffee house, and I got up, and just did very ship specific observational humor about what was going on. And from that, I started joking about guys and girls and how they interact.” 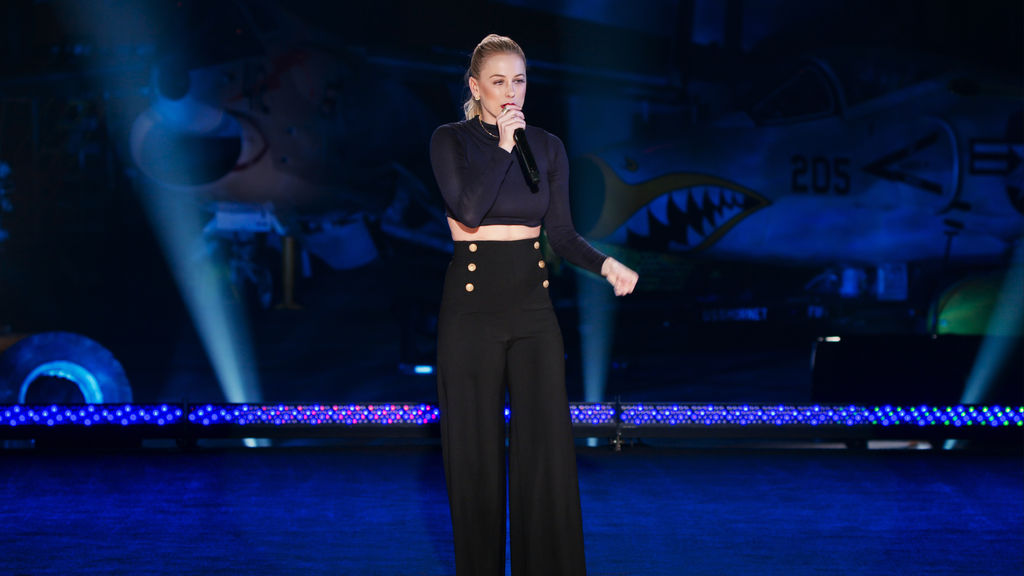 She later moved to Los Angeles to focus on her career and did her first stand-up there. She then became a part of ‘Hollywood Improv’. The breakthrough in her career came when she was declared the winner of ‘The Last Comic Standing’ in 2008. Furthermore, she was the youngest woman to have claimed that title. The notable comedian has also acted in movies such as ‘Spenser Confidential’(2020), ‘Instant Family’ (2018) and ‘Paradise’ (2013).

Who is Iliza Shlesinger Married to?

Iliza Shlesinger is married to Noah Galuten who is a chef and author. Shlesinger revealed in ‘Unveiled’ that the two met on a dating app. They soon got engaged and finally married in 2018. They tied the knot in City View Penthouse & Skydeck at the South Park Center.

In today’s #dontpanicpantry we tried to make spätzle and we didn’t fail. Most chefs are only brave enough to show themselves making things they are great at. Well, my husband @galuten had made me almost every meal I’ve had for 3 years and i can count on one hand the number of times I haven’t gone back for seconds. He is a wonderful chef and, while he wasn’t too pumped about the outcome, he still made it and it was still tasty. The “purple smashers” were awesome and the important thing is you now have the recipe and the experience of us entertaining you. And we enjoyed it too! See you tomorrow on Keine Panik Speisekammer. #dontpanicpantry tomorrow is a pot of TASTY BEANS! A staple during these quarantine times… quarantimes. See you at 3pm PDT and we will check back in at 5pm PDT w the finished product!

Shlesinger shares the experience of her marriage with a hilarious take on the social expectations of marriage and wedding traditions in ‘Unveiled’. Noah Galuten is a popular figure on Shlesinger’s Instagram posts and stories. They regularly upload episodes on ‘Don’t Panic Pantry’ where Galuten cooks a dish on IGTV Live with Shlesinger. They post the ingredients of their next dish well in advance. Shlesinger’s Instagram account is filled with the pictures of Galuten, her dog, Tian-Fu and herself.

Galuten also features in her Netflix comedy series ‘The Iliza Shlesinger Sketch Show’ with actors such as Ilana Becker and Tarik Davis. The show is an extended comical take on the various facets of feminism, popular culture, and other social themes.