Oakland County Child Killer’s Case: Who Is Jeff Gannon? Where Is He Now?

Investigation Discovery’s ‘Children of the Snow’ is a limited series that examines the horrifying string of homicides committed by the infamous Oakland County Child Killer. Between the winters of 1976 and 1977, four young kids – two boys and two girls – were abducted and slain in Oakland County, Michigan, with their bodies carefully laid to rest on the snow. Both the young males were sexually assaulted, whereas the females were left physically untouched. And, of course, as Jeff Gannon’s name is one of the most notable ones in the investigations for this case, he’s been looked into as well.

Who Is Jeff Gannon?

According to a few reports, it seems like the anonymous tipster who became a common figure in the Oakland County Child Killer case does, in fact, have a name – Jeff Gannon. Whether or not even this is an alias, though, is yet to be confirmed. In 2010, he, under the name of “Bob,” gave an interview to the Oakland County Child Killer Task Force, wherein he claimed to know who the killer was, revealing that he had a relationship with him in 1977 as an acquaintance. As per Bob’s accounts, there are many more victims of the Child Killer, and he committed all these heinous crimes as a sort of satanic sacrifice. 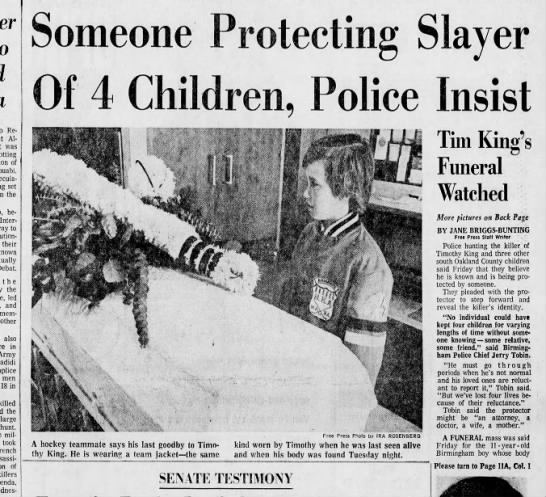 Bob further went on to ask the investigators if he could get information about their persons-of-interests and see the letter that had been mailed to them by the suspected Child Killer so that he could be sure he had the right man before he gave them a name. Bob’s requests were denied, but he continued to meddle in the matter. Then, he claimed to be an investigator, who, with his team, spent over 10,000 hours over several years to examine this case. However, when asked to release his findings, he admitted that he was reluctant to do so as he doubted the competence of the Oakland officers.

In 2012, Bob, with the help of Paul Hughes, an attorney representing a victims’ mother, held several phone conferences, intending to hand over the evidence he had accumulated. And in the end, he did so, but only to a select group of Detroit journalists. To preserve his anonymity, Bob insisted that none of the conversations be recorded. He declared that he had information linking at least a few more children’s murder to the unidentified serial killer and theorized that the perpetrator was killing so as to conduct Wiccan human sacrifices related to pagan celebrations and holidays or important dates in the lunar calendar.

Where Is Jeff Gannon/Bob Now?

After Bob claimed that there were a total of approximately 11-16 victims of the Oakland County Child Killer, significantly more than the four that have been officially confirmed, he explained his reasoning behind it. He alleged that his team found the other cases to be so similar to the previous ones that it was highly improbable for it to be a pure coincidence. And to be honest, his claims were seriously taken into consideration by the media as he also said that he had worked within law enforcement in his lifetime, although he refused to reveal which division.

As for who he really is or what he does, well, we’re not too sure, especially as we have no idea what he looks like or if Jeff Gannon is even his real name. After all, Paul Hughes himself admitted that even he didn’t know Bob’s real identity. In fact, in all the interviews he gave over the years, he also refused to reveal where Bob lived. All we know is that, in the end, all of Bob’s claims were dismissed by the authorities because of a lack of evidence, and that the families of the victims began feeling like Bob was trying to make a profit out of their ordeal.