Who is Kitty in ‘The Masked Singer’? Clues and Guesses 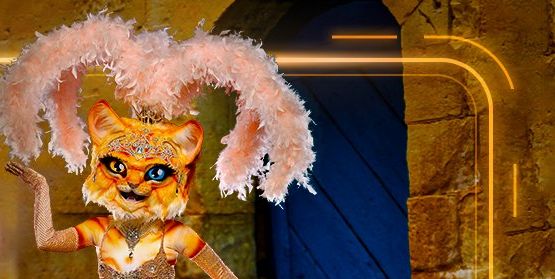 ‘The Masked Singer‘ Season 3 is all set to introduce us to some new performers in Group B. While the show hinges on stage presence, and the excitement of finding out who’s behind the mask, it is also a singing competition. Thus, it is always refreshing to see a performer with a good set of vocals.

You can get a glimpse of Kitty’s upcoming performance below, where she sings Ariana Grande’s “Dangerous Woman”. Moreover, Kitty’s detailed costume has also got tongues wagging.

Her voice is purr-fect. 😻#KittyMask is a "Dangerous Woman" in an all-new episode of #TheMaskedSinger Wednesday at 8/7c! pic.twitter.com/DD5QnZ6MWb

Naturally, you might be wondering about who is behind the Kitty mask. We have got you covered, as we present you with all the clues and guesses.

While we have been provided with an image of Kitty’s outfit, not much else has been given out as clues. We just know she is being touted to be ‘purr-fect’. Thus, we have to focus on clues in the performer’s outfit. The first thing that is evident is that the eye colors are different. The second thing that is striking is that this Kitty seems to have a human body, almost like those in ‘Cats‘.

Even more striking is the fact that there is a cat present in the same image. While this might mean the celebrity actually likes cats, it could simply be a misdirection. After all, even Elephant is photographed with an actual elephant. With so little to go on, everything could be a clue, from Kitty’s boa to the sparkly dress. Notably, in the peek at the performance above, Kitty is not next to Nick Cannon, which would have given us a clue about her height. Nonetheless, you can check out the post below, to see if any other clues jump out at you.

Coming to the guesses about Kitty, most fans have focused on the different eye colors. With one blue and one green eye, the condition is known as heterochromia. Some people on Reddit have taken it to mean that the person behind the mask could be Kate Bosworth, Jane Seymour, or Mila Kunis.

However, guesses are all over the place, for now, because fans have also posited theories on the very post where Kitty’s costume has been introduced. They have gone with the likes of Cardi B and Hailee Steinfeld. Some have even gone with Taylor Swift since she appeared in ‘Cats’. However, considering the pop singer’s busy schedule, and family commitments, due to which she has cut her tours short, it is unlikely Taylor is behind the mask.

Twitteratis have put forth their ideas as well, with some saying it is Christina Aguilera and some saying it is Halsey. However, everyone seems to agree that Kitty’s voice is quite familiar and incredibly powerful. People are already hoping that she makes it past Group B to the final pool of contestants. You can check out one such netizen’s guess below.

I wonder if Miss Kitty is this singer:
Christina Aguilera pic.twitter.com/xXF0yfLZgm

Among all these guesses, there are two more that are thought out. One netizen has commented that Kitty is Tori Kelly, from ‘Sing‘ because her voice sounds like the character of the elephant, to which Tori lent her voice in the movie. Check out the tweet below.

I just think it’s Tori Kelly because the Kitty sounds a lot like the Elephant from SING, which Tori was the voice actress for.

The other smart guess is that Elizabeth Berkley of ‘Saved By the Bell’ fame could be behind the mask. After all, she has heterochromia and has a similar outfit as Kitty’s, in her appearance in ‘Showgirls’. Thus, this seems to be a rather likely option after all.

That being said, we have no doubts that more about Kitty will come to light once the first clue package is given out after the performer takes the stage.

Read More: Who is Frog in The Masked Singer?