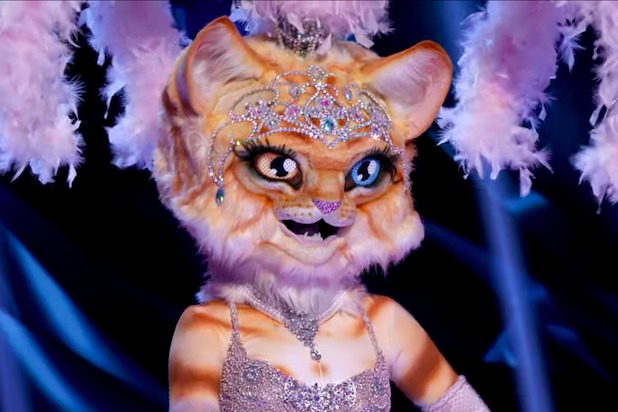 ‘The Masked Singer‘ Season 3 has been a treasure trove when it comes to talented performers, who amaze us with their vocal prowess and stage presence. Group B has been no different, and one of the outstanding performances has come from Kitty.

With an extremely detailed costume and a moving rendition of Ariana Grande’s ‘Dangerous Woman’, Kitty is definitely a force to be reckoned with, in the competition. Naturally, you might be wondering about who is behind the mask. We have got you covered with the latest clues and guesses, but you can take a look at the clue package below, to see if anything jumps out at you.

Kitty’s clue package has been visually stimulating. If you know your film history, the series of clips shown at the start is not just a nod to traditional Hollywood, but very reminiscent of the work of Georges Méliès. Among the visual clues we see, are a telescope, wizard, and pirates. We also see a rose shattering.

Kitty’s costume has different eye colors, which is a clue in itself. As for verbal clues, Kitty wants to wipe the slate clean and tells us that people think of her as the person she once was, instead of the person she has become now.

Based on these clues, some fans believe that Kitty might be Emma Watson. The rose could refer to Belle or Watson’s role in ‘Beauty and the Beast‘. The wizard, obviously, is a reference to her time in the ‘Harry Potter‘ movies. The cat costume itself could refer to Hermione’s cat, Crookshanks. Interestingly, Watson’s character does turn into a cat briefly, after a polyjuice potion experiment goes wrong. To top it off, the pirate reference could be a nod to the rumors that Emma Watson might be cast in the next ‘Pirates of the Caribbean‘ movie.

Kitty’s reference to people seeing her for who she used to be, might refer to the indelible mark Hermione has left in our minds, where we automatically associate Emma with the character. However, Emma doesn’t have two different eye colors. Nonetheless, you can check out a tweet, backing up our reasoning.

Lindsay Lohan also seems to be a popular guess, with one fan stating that the pirate sequence could be a nod to Lohan fencing in ‘The Parent Trap’. However, it has been noted that Kitty doesn’t sound like her. Check out the tweet below.

Kitty gives me Lindsay Lohan vibes from the package but does not sound like her at all #MaskedSinger #TheMaskedSinger pic.twitter.com/y8Gp1rYDZn

On the other hand, Mena Suvari seems like a good guess. The rose in the clue package has been interpreted differently, but some fans have rightly pointed out that it could refer to Suvari’s role in ‘American Beauty‘. Check out the tweet, and the relevant scene, below.

For the kitty they were showing a bunch of iconic films since the man on the moon one and AMERICAN BEAUTY is one classic iconic film! KITTY has to be MENA SUVARI #MaskedSinger pic.twitter.com/Osfm8nPBAk

Kate Bosworth and Mila Kunis also happen to be popular guesses, since the former can sing, and the latter happens to be a fan of ‘The Bachelor‘, which would explain the rose. However, what asserts these guesses, is the fact that both of them have two different eye colors, like Kitty.

A more thought out guess is that Kitty could be Elizabeth Gillies. She has appeared in ‘Victorious’, which pushed Ariana into the spotlight, and is a good friend of the singer’s. They have also appeared in ‘Sam & Cat’. You can check out a fan’s tweet, reaching the same conclusion.

Sarah Hyland from ‘Modern Family‘ is also a good guess, since she is engaged to Wells Adams from ‘The Bachelor’ franchise. Moreover, her desire to wipe her slate clean could refer to moving on from several problems, including mental health and body image issues.

Obviously, there are quite a few guesses out there, at the moment. It remains to be seen who Kitty really is, once more clues are presented in the upcoming episode.