Who is Taco on ‘The Masked Singer’? New Clues, Guesses 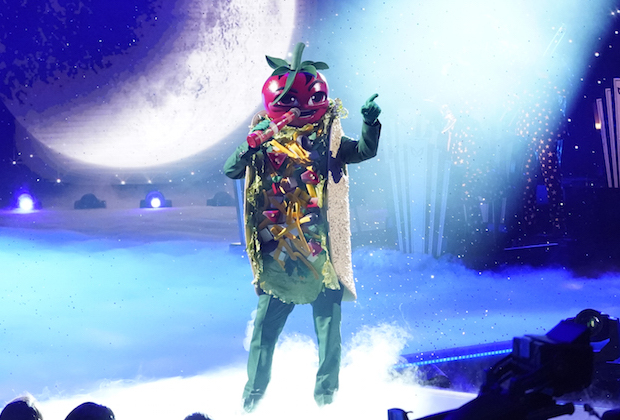 ‘The Masked Singer‘ Season 3 has given us a new batch of participants, in Group B, and they seem to be more energetic than the Group A members. One of the most enigmatic performers has been Taco. With a sassy pose, and smart puns serving as an introduction, Taco’s identity has kept us guessing for a while.

However, now that Taco has revealed the first clue package, and delivered a smooth rendition of Frank Sinatra’s ‘Fly Me To The Moon’, you might be wondering if we are any closer to uncovering who is behind the Taco mask. Check out Taco’s clue package below, as we bring all the clues and guesses surrounding the character.

Taco’s clue package is quite rich, visually. The character reveals that he has been a comforting part of our lives for decades. Naturally, this indicates that the man behind the Taco mask has had his time in the spotlight, perhaps in some program that enjoys a steady and loyal fan following.

As far as visuals are concerned, we have seen a stack of VHS tapes, a ship anchor, and a miniature trolley. Naturally, the trolley brings to mind, an obvious association with San Francisco, since the city is famous for this antiquated mode of transportation.

Keeping this in mind, let us move towards the guesses about Taco’s identity. The most popular guess by panelists and fans has been Bob Saget. The clue about being a comforting part of our lives could refer to the many popular shows that Saget has been a part of, like ‘Full House’, ‘How I Met Your Mother‘ (narrator), and ‘America’s Funniest Home Videos’.

The VHS tapes could also be a subtle nod to ‘America’s Funniest Home Videos’. The trolley that we see, might be a nod to San Francisco, where ‘Full House’ is set. Fans are convinced it is Saget wearing the Taco mask, as you can see from the tweet below.

Taco is definitely @bobsaget
The video tapes are for AFV & San Fran is where Full House was set! #MaskedSinger

However, there is a slight caveat in this almost surefire guess. Saget himself had taken to Twitter to deny what was said about him. The since-deleted tweet, reads, “Dear nice people, I ain’t the friggin’ Taco. Why would I want to be a mascot? They say any press is good press – but the taco? A burrito, maybe. Best wishes, Bob.” While this seems to put the matter to bed, the fact that Saget deleted his tweet might indicate that he is trying to cover up his identity as Taco, on ‘The Masked Singer’.

In the event that it is not Saget, the next best guess, which we are leaning towards ourselves, is Tom Bergeron. Apart from Saget, Tom too hosted ‘America’s Funniest Home Videos’, and currently hosts ‘Dancing With the Stars‘. He has had a long and illustrious career on television, which would explain the verbal clue.

As for the trolley, a Twitter user has pointed out that Tom recorded a song for the Mr. Rogers tribute album. The trolley that featured prominently there might tie-in with the miniature trolley seen in the clue package. You can check out the tweet below. It also proves that Tom’s got a nice set of vocals, making him a perfect fit for ‘The Masked Singer’. To top it off, Tom’s New Hampshire roots might be what the anchor refers to.

Without a doubt Taco is Tom Bergeron. It’s the same Trolley that is on the Clue package!! #MaskedSinger pic.twitter.com/flJ9ycavr9

Another guess has been LeBron James. The Lakers basketball player might be the ideal person behind the Taco mask because he loves tacos, and has proclaimed so, publicly. In fact, LeBron tried to make ‘Taco Tuesday’ a trademark phrase but was denied by the courts who decided it was a commonplace term. Perhaps the star sportsman is trying to prove his love for tacos by performing as one. As far as LeBron’s singing voice goes, we don’t know if he can belt out a Sinatra. However, he can definitely rap, as we have heard in ‘Carpool Karaoke‘, where he raps ‘It Was a Good Day’, with Ice Cube.

Guy Fieri’s name has also been thrown into the mix because he owns Guy Fieri’s Dive & Taco Joint, and has been a vocal fan of ‘The Masked Singer’ in the past. Kelsey Grammer also seems to be a good guess, as he has been a part of shows like ‘Frasier’ and ‘The Simpsons‘. While a trolley might refer to San Francisco mainly, trolleys also run through Seattle, where ‘Frasier’ is set.

Moreover, Taco’s choice of a Sinatra song has led fans to believe that it might be Kelsey, who admires Sinatra a lot. In fact, even Sinatra invited Kelsey to several events and approved of the trajectory his career was taking. Other guesses about Taco’s identity include John Lithgow, Tim Allen, Seth MacFarlane, and Dave Coulier. You can check out the tweets below.

As you can see, there are numerous guesses at this point, some stronger than others, admittedly. With the next episode of ‘The Masked Singer’, we are bound to get more clues about Taco and his voice, which will help us narrow down on who this sassy snack really is.