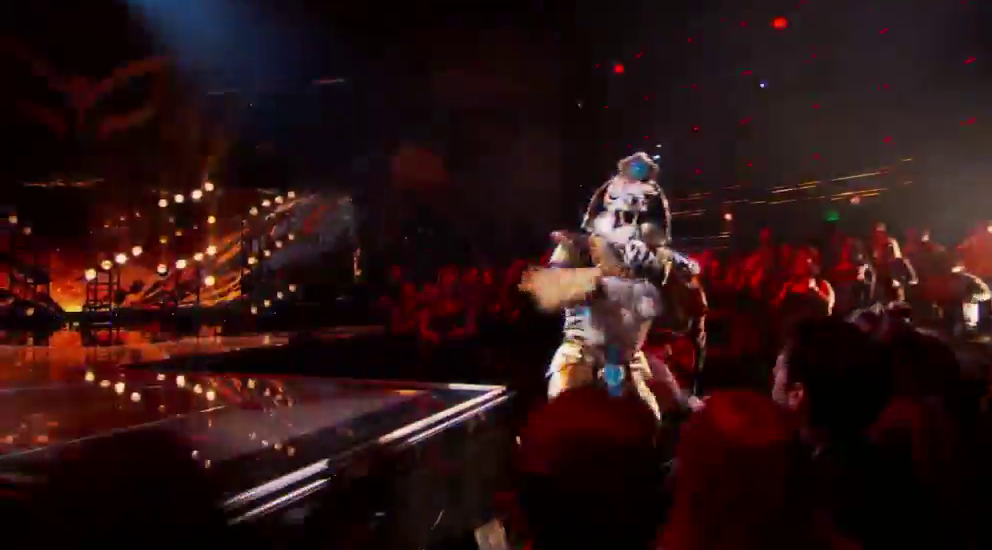 ‘The Masked Singer‘ Season 3 has seen a roster of 18 participants being divided into groups of six. We have seen the members of Group A perform in the past two episodes, and Episode 3 marks the finale for Group A. There have been some stellar performances in the group. While White Tiger has not had the finest performance, singing-wise, the participant knows how to work the crowd.

With stunning energy, White Tiger moves on to the next round, after an intense performance of Queen’s “We Will Rock You”. In case you are wondering about the clues and guesses surrounding White Tiger, we have got you covered.

White Tiger, too, gives out two sets of clues. The best thing about the performer is his self-awareness. He knows he does not have as much skill in singing, so he focuses on working the crowd, as part of his strategy. He says as much while introducing himself.

White Tiger also mentions how he can dance, despite others doubting him. Apparently, he has all the moves, like twerking and prancing. We are also presented with a message from a loved one, in this case, a college buddy. While the friend narrates how much fun White Tiger is, we see a series of visual clues. The friend is at a bar, there is a dartboard. We see butter, and a coin (which is actually a quarter), and a phone. The clue package also mentions the phrase ‘smell what I’m cooking’.

Notably, the college buddy’s story about White Tiger edging past others, involves him pretending to be a male strip dancer, to attract the attention of ladies at a bar. After the performance, White Tiger reads out the letter to Jenny. He says he is wild about her but knows her husband would appreciate the card even more.

You can check out White Tiger’s performance below.

Jenny picks up on the clues from the card, and the fact that her husband, Donnie Wahlberg, is from Boston. She once again goes with Rob Gronkowski, of the New England Patriots. There is also the mention of quarters, referring to quarterbacks. Thicke agrees with the assessment.

Nicole is more cautious because she believes that being sure might mean that they are being misled. She picks up on the ‘Magic Mike’ (male strip dancer) reference in the clue package and deduces that the performer is fun. She guesses Joe Manganiello. Ken Jeong’s thought process confuses both the judges and host Nick Cannon. He fixates on butter, as a clue, and connects it to rebranding. Therefore, he guesses that the performer might be Fabio.

Our Guesses About White Tiger:

We can't help but get up on our feet when #WhiteTigerMask performs! 💃 #TheMaskedSinger

As we have already said, White Tiger is most likely to be Rob Gronkowski. After all, it ties in with what Nick Cannon said about the Super Bowl trophies. Most netizens are inclined to agree with this opinion as well. Notably, we believed that the White Tiger was likely to be eliminated in this episode. However, since his energy has seen him through, it will be a while before the tiger mask comes off, as the show will now head to Groups B and C.