Who’s Your Daddy?!: Everything We Know 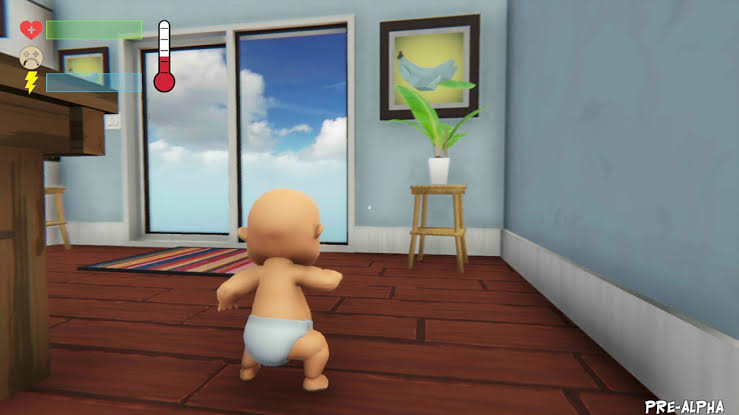 Initially funded through the crowdfunding website Kickstarter in 2015, ‘Who’s Your Daddy?’ managed to raise around $2,500 in total with a simple pitch – an uncomplicated 1 vs 1 video game featuring a “clueless father attempting to prevent his infant son from certain death.” The game was a surprise success, managing to score 72% positive reviews on Steam and selling well enough to justify a remake. Read on to find out everything we know about the upcoming ‘Who’s Your Daddy?’ remake, purportedly titled ‘Who’s Your Daddy?!’.

Who’s Your Daddy?! Gameplay: What to Expect?

The original ‘Who’s Your Daddy?’ released in late 2015 after a Kickstarter crowdfunding campaign and a relatively short development period. The game featured a rather simple premise – there are two main characters, namely the baby and the daddy. It is the daddy’s job to keep an eye on the baby and prevent its death by performing tasks such as hiding dangerous objects and covering power outlets.

On the flip side, the baby’s only goal is to somehow take his own life through baby-like actions such as sticking forks into power outlets, consuming various liquid cleaning products such as bleach and diving in a deep bathtub.

‘Who’s Your Daddy?’ takes place entirely inside a two-story house with a number of rooms. The locations of items are randomized in every playthrough. In order to help him keep his progeny alive, the Daddy also has access to power-ups including Peek-A-Boo, which makes the daddy invisible for a period of time, and Bat Dat, which allows the daddy to view the baby’s location and health level even through walls. Most of the fun and comedy in ‘Who’s Your Daddy?’ is derived from the game’s wacky physics and black humor facilitated by the silly premise.

The original game features very simplistic visuals from a locked first-person view. However, the game does offer full multiplayer support for up to two players both online and local split-screen, with one player playing as the baby while the other plays as the daddy.

The upcoming remake ‘Who’s Your Daddy?!’ will feature a slew of welcome improvements over the 2015 original. The most immediately noticeable improvement includes the visuals. While the first game featured a passable but generic graphics style, the remake opts for a much more refined cartoony style that fits in better with the theme. This is further aided by smoother animations and new effects, making the overall gameplay experience even more pleasant.

However, the improvements go beyond simply cosmetic changes and include significant gameplay additions. The baby now has access to additional reckless activities including riding the bulldog, spilling ketchup on the floor to trip up the daddy, swinging around on the all-new ceiling lamps, hiding in cupboards and trashcans, jumping on a trampoline, throwing objects to knock out the daddy and much much more. There is also a brand new unlockable perk that can allow the baby to walk.

Of course, the daddy also gets additional mechanics. He can now feed the baby (rather violently based on the trailer) to restore its health and store up to eight items in the handy new pockets mechanic. All of these improvements will definitely improve the original game, which suffered from the problem of limited content and interactions.

Other upgrades in ‘Who’s Your Daddy?!’ include the optional third-person camera and the new ominous-looking basement area in the house.

Who’s Your Daddy?! Developers: Who Are the People Behind the Game?

‘Who’s Your Daddy?!’ is being developed by Evil Tortilla Games.

Who’s Your Daddy?! Release Date: When and Where Can I Play It?

Like the first game, the remake will be available to play on PC (Microsoft Windows, Mac OS X, Linux) on the Steam storefront. A console release could be within the realms of possibility, with the developers expressing a desire to port the game to Xbox One, Android and iOS in the future.

You can watch the trailer for ‘Who’s Your Daddy?!’ right here.