Viola Davis Locked to Win Her First Oscar, But Will Denzel Washington Win His Third? 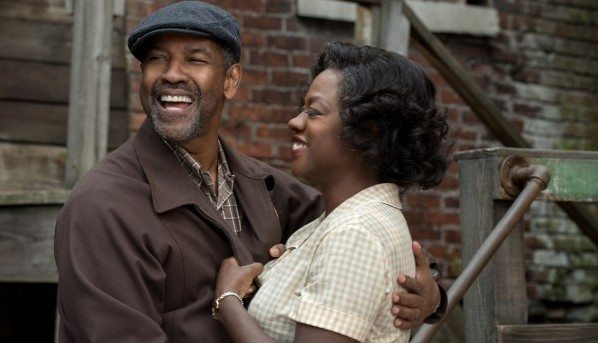 With the long-awaited film version of ‘Fences’ screening last night in Los Angeles for the industry and some press climaxing in a ten minute standing ovation for the film, tweets from the attending audience started circulating as soon as the final credits began to roll. It was a long journey for the film from stage to the screen, but it would seem Washington, who also directed has done everything right in bringing the picture to life.

It seems a no brainer that both Washington and co-star Viola Davis will be Oscar nominees for Best Actor and Best Supporting Actress, and could see Denzel land in the race for Best Director and Best Picture. One of the great plays of the 20th century, written by the great August Wilson, the film explores the bumpy relationship between a father and son, as their wife and mother is caught in the middle, their world bonded by their love of baseball.

For Washington a third Oscar win would put him in unique company, for only a few special actors have collected three Oscars for acting, Meryl Streep, Jack Nicholson and Daniel Day-Lewis among them. His competition will come from Casey Affleck who in Manchester by the Sea gives one of the finest performances ever put on film, and I am not sure Washington will top him, but with the cry for more diversity could win the Oscar regardless.

One of the screens great actors, Washington won Oscars for Glory (1989) and Training Day (2001), but let’s get clear, should have won for Malcolm X (1992), perhaps for The Hurricane (1999) and deserved further nominations for Philadelphia (1993), Courage Under Fire (1995) and American Gangster (2007). In recent years he had moved away from truly more challenging roles, going for action movies where he portrayed tough, ass kicking silent characters. His work in Flight (2012) was a return to character acting and Fences (2016) could be a career capping best performance.

Viola Davis is beloved within the Academy, and there are a lot of people out there who believe she should have won a few years ago for The Help (2011), losing to Meryl Streep in The Iron Lady (2011). Ironically, it was one of those times when a sentimental award robbed the real winner, in this case Davis, who was victim to Streep not having won though deserving for twenty-eight years. The quiet, stoic dignity Davis brought to the role was perfect, a strength no one could see, a courage she dared to possess. After a nomination for her performance as a distraught mother in Doubt (2008), she crossed into the Best Actress category only to lose to Streep. Though both Davis and Washington won Tony Awards for lead actor and actress for their work in the play on Broadway, Davis, after seeing the film has elected to be campaigned for supporting actress, believing hers was truly a supporting role.

With Emma Stone in ‘La La Land’ and Natalie Portman in ‘Jackie’ leading the Best Actress race, going supporting allows Davis the greater chance to win, her greatest competition being the luminous Michelle Williams in Manchester By the Sea.

‘Fences’ it seems will rack up eight to ten nominations with relative ease, and could challenge for Best Picture, though its best chances seems to be Washington and Davis. Davis will certainly win Best Supporting Actress, but the bigger question is: Will Washington win his third Oscar?