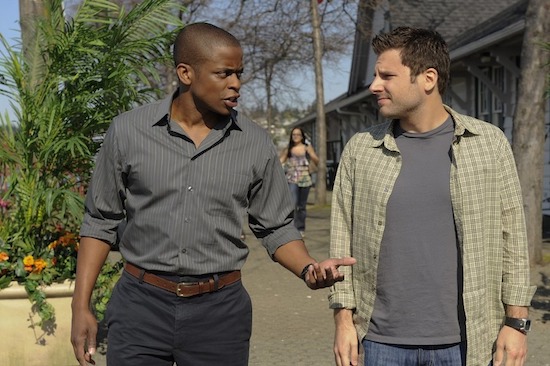 Successful television shows often get rebooted or receive reunions, similar to how movies get sequels. Well, the popular detective comedy, ‘Psych’ was revived as a movie with ‘Psych: The Movie’ in 2017. After viewers enjoyed that film, a sequel to it was released on Peacock, titled ‘Psych 2: Lassie Comes Home.’

‘Psych 2: Lassie Comes Home’ picks up after Lassie getting shot and being shifted to a clinic for recovery. However, he starts to notice strange things at the clinic. Then, detectives Shaun and Gus get involved in order to solve it. Fans would have wondered whether there is going to be a sequel to the movie. If so, when will it be released?

Now the first question that viewers would have had is whether there is going to be a sequel to ‘Psych 2: Lassie Comes Home.’ Well, there is certainly a big possibility for that to happen. Speaking to Deadline, the President of Original Programming of NBCUniversal Entertainment Networks and Direct-to-Consumer, Bill McGoldrick said, “We are going to see how this movie performs but we’ve loved the collaboration, we are going to be in constant conversation with that group, and we are open to talking about more.”

However, the creator of ‘Psych’ has plans of way more ‘Psych’ movies: at least four! He tweeted about the same. Have a look:

Four more movies. You know, not counting this one. Then we figure out all the other ways to keep doing this. #AskPsychWriters #Psych https://t.co/fij56ZJkys

Even if Franks might be joking, we can’t deny the fact that ‘Psych 3’ is very viable. And in case you are wondering when ‘Psych 3’ will release, here’s what we know. ‘Psych: The Movie’ was released in December 2017. ‘Psych 2: Lassie Comes Home’ was released in July 2020. Hence, going by that timeline, we expect ‘Psych 3’ to release sometime in 2022 or early 2023.

When it comes to the plot of ‘Psych 3,’ very little can be speculated. This is because of the standalone nature of the ‘Psych’ movies. To be clearer, each ‘Psych’ movie sees the detective duo take on a different case. Hence, there is no reason that that should be any different for the third movie.

The cast is where things get interesting. Just before ‘Psych: The Movie’ was slated to be filmed, actor Timothy Omundson who plays Lassie had a stroke. Hence, the entire script had to be rewritten with that in mind. However, the character of Lassie plays a major role in the second ‘Psych’ movie. Omundson was still in recovery at the time of filming. Hence, his character was written to accommodate Omundson’s recovery. There is no reason that Omundson shouldn’t return for the third movie as well.