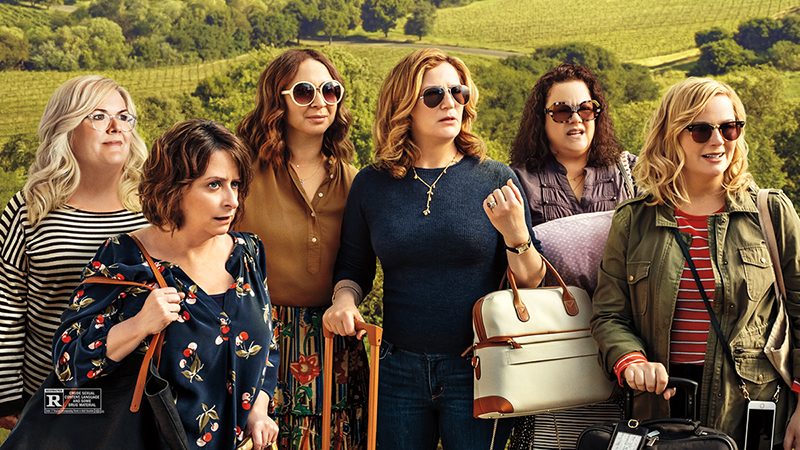 The first official trailer of the upcoming Netflix comedy ‘Wine Country’ is out. The trailer gives a glimpse into the movie’s central theme of friendship as a group of friends celebrating a 50th birthday in the Napa Valley. Directed by Amy Poehler, the movie tells the story of the reunion of a group of longtime friends. Rebecca, played by Rachel Dratch, turns 50 and Abby, played by Poehler, plans an elaborate weekend getaway to celebrate the milestone.

The trailer opens up with a lavish visual of a vineyard and plenty of wine. ‘I want to sing a little ditty for my very short friend Rebecca, who is turning 22 tomorrow, wink-wink. I’m gonna give you something you ain’t never had before,’ announces an excited Maya Rudolph to her friends. Then, she lies down on a piano and starts singing before slides down to hit the floor and picks herself us.

‘I just want this to feel like a regular vacation, and somewhere in there, I’ll just slide into 50. The film goes on to explore the idea that age is just a number,’ Dratch’s character declares in the trailer. However, as the weekend party continues, Fey’s character busts out the bitter truth, ‘Whatever gets said is probably what the person has always felt, and the alcohol just lets it out.’ ‘These women, I’ve known for 20-plus years, and yeah, sometimes I want to tell them to fuck off — that’s what intimacy looks like,’ replies Poehler’s character. The trailer hints at a wild party-turned-self-introspection drama with some hilariously mischievous situations.

‘Wine Country’ is Amy Poehler’s feature directorial debut which stars several of her Saturday Night Live regulars like Maya Rudolph, Rachel Dratch, Ana Gasteyer, Emily Spivey, Paula Pell, and Tina Fey. The cast also includes Maya Erskine, Jason Schwartzman and Cherry Jones. The movie is written by actress Spivey and Liz Cackowski, who also appears on the screen. Poehler reportedly conceived the idea of the movie from her experience during a real trip for a 50th birthday celebration of a friend. ‘In real life, the trip to Napa and Sonoma County went according to plan, but in the movie, things go bonkers. We exaggerated some of the Northern California characters and occurrences, none of which I am permitted to share at this time!’ Dratch revealed to THR in a 2018 interview. Specifically, Poehler inspired the plot from one her trips with Rudolph, Gasteyer, Pell, and Spivey to Napa Valley to celebrate Dratch’s 50th birthday. Another trip inspired Poehler to make the movie is to Palm Springs for Gasteyer’s 50th birthday celebration.

Even though the director’s cap is afresh to Poehler, she has been creating exclusive content for streaming platforms for quite some time. She has Netflix’s hit ‘Russian Doll’ to her credit as one of the creators. She has also executive produced the series ‘Difficult People’ for Hulu. Netflix’s series ‘Wet Hot American Summer’ has Poehler as an important character, Susie.

‘I decided to make the movie not only because these are the greatest, funniest performers,’ Poehler told in a Vanity Fair interview, ‘but there’s just not enough films that take full advantage of what it’s like to be our age and to be around women that have known you for a really long time but aren’t competing for the same job or the same guy.’ She added that ‘The women I know in their 40s and 50s are incredibly interesting, funny, accomplished, doing a million things, and there’s a lot of rich stories to tell there that don’t involve loss or fear of being left.’

Watch the official trailer of ‘Wine Country’ below.

The movie, which sports a tagline ‘friendship is a trip’ hits Netflix on May 10.